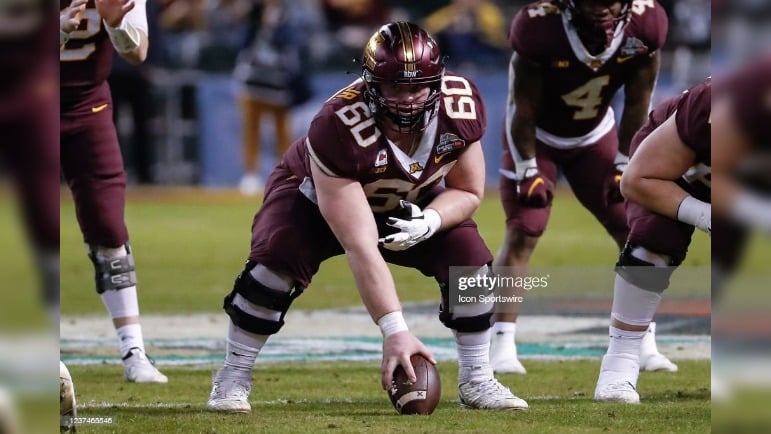 From now until the 2023 NFL Draft takes place, we hope to scout and create profiles for as many prospects as possible, examining their strengths, weaknesses, and what they can bring to an NFL franchise. These players could be potential top 10 picks, all the way down to Day 3 selections and priority undrafted free agents Today, I’ll be profiling Minnesota IOL John Michael Schmitz

— Possesses great size and a large frame (6’4, 320lb)
— Filled out-frame with thickness and strength to thrive in the trenches
— Has impressive strength to drive defenders off their spot, running them off the LOS
— Grip strength pops on tape, having the ability to torque defenders away from the ball
— Has a strong punch when he is able to land first contact
— Movement skills are adequate for his size, being able to climb to the second level and pick up blocks in space
— Can flow well in inside zone blocking schemes, moving laterally to block his target
— Goes a great job executing reach blocks to create a seal in the run game
— Will turn a defender’s shoulders and use his momentum against him to pancake him to the ground
— Plays with a mean streak as a run blocker, looking to bury his competition
— Was a high school wrestler, explaining his finishing mentality
— Blocks to and through the whistle, running his blocks with great effort
— Effective down blocker that washes away his opposition
— Does a good job executing the combo block off to the linebacker
— Has a sturdy base that can sit in and anchor against the pass rush
— Smart pass protector that can identify and pick up stunts and twists
— Battle-tested blocker that is ready to immediately jump in an contribute at the pro level

— Older prospect that will be a 24-year-old rookie
— Lacks high-end athleticism, specifically foot quickness and sudden change of direction
— Will have defenders run outside his reach and evade his grasp at times
— Arm length is in question as pass rushers will get into his chest and control the rep
— Will duck his head and lunge forward into blocks at times, leading to whiffs
— Can have balance issues when opening up and running or getting bumped around at the LOS

John Michael Schmitz is a well-built, physical offensive lineman out of the University of Minnesota that has been with the Gophers since 2017. The sixth-year senior has logged 36 starts at the pivot position after initially playing tackle in high school and being recruited as both a center and a guard at the college level. He fits the persona of a physical, nasty run blocker, possessing the size (6’4, 320lb) as well as the temperament to effectively open running lanes on the ground.

When you watch JMS on tape, you see a menace when it comes to how he enforces his will on defenders in the running game. He looks to plant his competition into the turf, physically dominating the grown man across from him on the LOS. Watch this rep against Illinois where JMS picks up the LB in the A-gap, washing him down the LOS as he pancakes him to the ground, creating a big cutback lane that the back exploits for a big gain.

Nastiness is something that comes naturally for John Michael Schmitz as you can see in the clips below, doing a great job locating the defender, latching on to their shoulder pads, and running his feet to and through the whistle as he takes the defender out of the play.

JMS does a good job working to the second level of the defense, chipping on the DL with the guard as he finds and gets a body on the linebacker. Watch this rep against the Illini where JMS completes the shotgun snap, gets his inside shoulder to the NT’s outside shoulder to double team with the RG, then releases to get the linebacker. He doesn’t completely seal him off, but he does just enough to knock the defender off his route, allowing the back to pick up a few more yards.

One aspect of John Michael Schmitz’s game that stands out is his ability to execute reach blocks at a high level. He has the grip strength to torque defenders away from the football as well as the movement skills to cut them off from getting to the ball carrier. Watch these plays where JMS successfully cuts off the DL, quickly working around them, and then leverages them away from the ball. The First Clips shows a quick transition followed by a pancake block and the second clip shows JMS staying on the defender who attempts to yank him off, using the defender’s move against him as he pushes him into the pile.

While he hasn’t played guard at the NFL level, John Michael Schmitz has the body type and enough movement skills to suggest some positional versatility may be there should a team want to work him at guard. He isn’t the most fluid athlete, but he does have deceptive lateral mobility as we see in this clip, climbing to the second level to pick up the backer and moves in-stride with him laterally across the field while engaged. An impressive feat for a 320lb man.

When it comes to pass protection, John Michael Schmitz has a strong, sturdy base to anchor in against the rush as well as a strong punch. He also is a cerebral blocker, being quick to ID twists and stunts and complete the exchange like we see on this rep against Penn State, allowing the QB to escape for a first down scamper.

Still, arm length is something to be concerned with for JMS as he will lose reps when he allows the defender to get inside his torso with first contact. Watch this rep where JMS allows the defender into his chest, opening up his right-side shoulder as the defender runs through to pressure the QB who scrambles out of the pocket.

John Michael Schmitz also has a bad tendency of dropping his head and lunging forward into blocks when he loses his balance or when he goes for the light-up shot. Case in point here on this play where JMS climbs to the second level and throws himself at the defender with head down and shoulder pads over toes, missing the block completely.

Overall, John Michael Schmitz is one of the most dominant blockers in all of college football and one of the best interior offensive linemen in this draft class. He is a gritty, aggressive run blocker that imposes his will on his competition while also having the IQ and stout frame to anchor in pass protection. He is a good athlete climbing to the second level and moving laterally but lacks high-end athleticism to be a fit in wide-zone running schemes. He has a few technical flaws he needs to work on along with answering questions on reach and arm length, but his starting experience and play demeanor should make him an early contributor at the next level in an inside zone and between-the-tackles gap running system.

JMS reminds me a lot of current Tennessee Titans C Ben Jones who has a similar build (6’3, 308lb) and athletic profile as John Michael Schmitz. Jones was drafted in the fourth-round back in 2012 and has been a constant for the Texans and Titans the last decade, excelling in the running game as a physical blocker that can reach block opponents and displace people off the LOS. Jones has the movement skills to work to the second level and in space as well as the size and smarts to play well in pass protection, making his game similar to JMS in several categories.

The Pittsburgh Steelers appear to be set at C with Mason Cole having played well this past season, but that shouldn’t deter them from looking at a player like JMS. While his resume doesn’t say he is position versatile, his frame and play style suggest he could play outside at guard, having the size and movement skills to be a viable run blocker in a gap or inside zone scheme.

Should Pittsburgh want to bring in competition for Kevin Dotson at LG and have an option waiting in the wings to groom as the center of the future, John Michael Schmitz is a player to heavily consider on Day Two of the 2023 NFL Draft, bringing a skill set and demeanor that could take the running game to the next level.