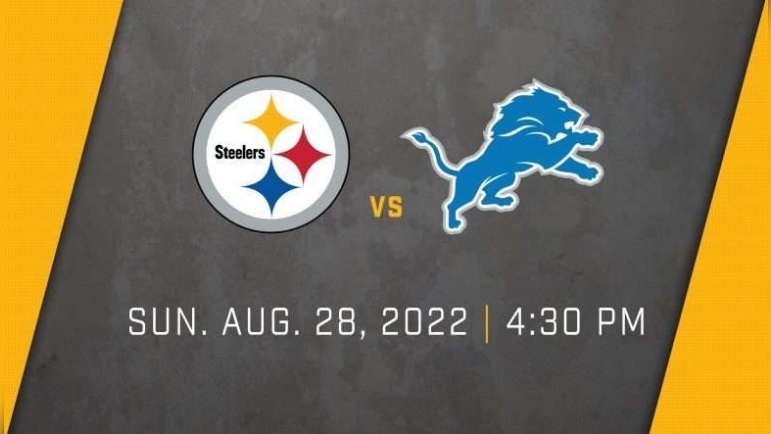 In anticipation of the Pittsburgh Steelers preseason finale on Sunday, I wanted to look at a few things before I can provide information after the game. In the preseason we get an opportunity to see more action from the younger players, so I wanted to put a table together of how the 2022 draft played out for the Pittsburgh Steelers and the Detroit Lions heading into the game: 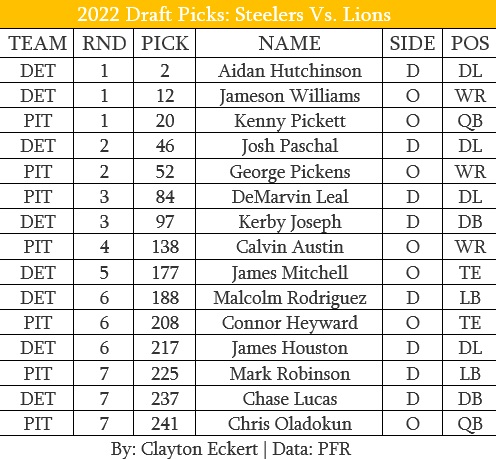 Other than getting a reminder of how the draft went for both teams, I also saw some fun takeaways. Detroit came out with eight players, one more than Pittsburgh. The Lions prioritized the defensive side of the ball with six of those picks, particularly with three edge rushers, compared to Pittsburgh’s priority on offense with 5/7 of their selections. Detroit had four picks on the first two days of the draft, two of which were early in the first round. Their next pick was in the fifth round, followed by two sixth rounders and a seventh on the defensive side of the ball.

The Steelers faced off against the number one overall pick when they played the Jaguars last week, and interestingly Detroit selected second overall, taking edge rusher Aidan Hutchinson. He has great athleticism (9.88 RAS) and impressed on limited snaps in the preseason opener. Hutchinson moved around the defensive line in his opportunities, with right defensive end being his primary spot in the contest. With both teams reportedly planning to play most of their starters, he should provide a good test for a Steelers offensive line needing to trend positively after a poor week two showing overall.

The Lions traded up for another early selection in the first round, selecting wide receiver Jameson Williams. They took him high despite tearing his ACL in the National Championship game, which he is still recovering from. Williams tied for the second highest Steelers Depot Draft Grade, too bad we won’t see him and the challenge he could provide against Pittsburgh’s secondary. I also enjoyed the Lions day two picks, starting with another athletic edge rusher (9.7 RAS) and second round pick Josh Paschal. He also has not played in the preseason due to injury, highlighting the Lions requiring patience on their early investments in the 2022 draft. Safety Kerby Joseph, Detroit’s third round selection, is tied for the most defensive snaps and leads the team in tackles this preseason, but has struggled in coverage. It will be interesting to see who he matches up with and who wins the battles if given the opportunity.

In the fifth round Detroit selected one of only two offensive players, tight end James Mitchell. He played 23 snaps in their last preseason game, with a couple short catches and seemingly fared well as a run blocker. Interested to see if Pittsburgh’s linebackers can get off blocks in the run game, as we saw Myles Jack refreshingly do last week, and considering Detroit ran all over Pittsburgh in recent memory. The Lions then selected linebacker Malcolm Rodriguez with their first of two picks in the sixth round. He is athletic (9.48 RAS) and played 33 snaps in two games for Detroit this preseason, and while he hasn’t filled the stat sheet seems to be playing respectably across the board. The other sixth rounder was edge rusher James Houston, who’s played 39 snaps to date and applied a pressure in their first outing. Really interested to see how the Steelers offensive line fares against these two (and in general). Their final pick in the seventh round was cornerback Chase Lucas, who has primarily played in the slot on 24 defensive snaps this preseason. He seemed to have an impressive opener in coverage and as a tackler on limited snaps but struggled last game.

Pittsburgh’s quarterback battle has gone smooth this preseason, including an encouragingly strong showing from first rounder Kenny Pickett. It was announced that the rotation will remain the same, with Mitch Trubisky getting the start, Pickett as the number two, and Mason Rudolph closing things out. Obviously want to see strong and competitive play from all parties (sans seventh round pick Chris Oladokun who was waived), and particularly interested to see how the quarterback passing locations pan out with one more game of data, hopefully with more explosive and middle of the field targets if the opportunity presents itself.

Insert second round pick and wide receiver George Pickens, who impressed overall in his debut but had only two catches for six yards last game. As I noted in the last preview, really looking for Pickens to hopefully be utilized down the field with the speed he possesses. Looking at the four explosive plays from week two, Trubisky provided an encouraging one to wide receiver Chase Claypool that was the only explosive air yard completion. Pickett also had a refreshing one that was a middle of the field target of 11 air yards to tight end Pat Freiermuth with nice yards after catch. The other two were from Rudolph, completed in the intermediate range on great additional yards efforts from wide receiver Tyler Vaughns. In the preseason thus far, only 2/7 explosive air distances have been completed.

Third round defensive lineman DeMarvin Leal has shown promise especially as a pass rusher, but struggled at times as a run defender along with a missed tackle, as I highlighted in my game recap and a concern from my offseason studies. This is the big thing I’m looking for in his opportunities, can he provide a more acceptable performance against the run as he did in game one, or will his pass rush potential be negated by this concern and limiting potential opportunities in the regular season?

Wide receiver and fourth round pick Calvin Austin unfortunately remains out with a foot injury. Many of you probably agree he is a piece of the offensive puzzle that I was extremely excited to see the fit this preseason, but it’s unlikely at this point and we will have to be patient. Wish I could say more, except hopefully it’s sooner rather than later he sees game action.

After an encouraging debut, h-back Connor Heyward had his warts last week. Missed opportunities as a receiver, unable to real in passes we know he can make, struggling as a blocker, and not providing the same impact on special teams. It will be interesting to track his performance on Sunday, to see if he can trend positively heading into the season.

Last, but certainly not least, is Pittsburgh’s seventh round linebacker Mark Robinson. He has played just over 30 snaps in each game thus far and has impressed overall. In his debut, it was the highlight play to cause the turnover to set up the win. Last week, I thought he showed a more balanced game with some impressive run defense as well as in coverage, earning high praises from former Steelers linebacker Vince Williams, whom he has been compared to a lot recently. Obviously hoping to see this positive trend continue, and thought Dave Bryan’s Terrible Take highlights his promising and aggressive play that we could (and hope) to see even more of in the finale.

Which rookies are you most excited to see (if given playing time)? Who are your favorites to perform well? How about non-rookies? Thanks for reading and let me know your thoughts in the comments!