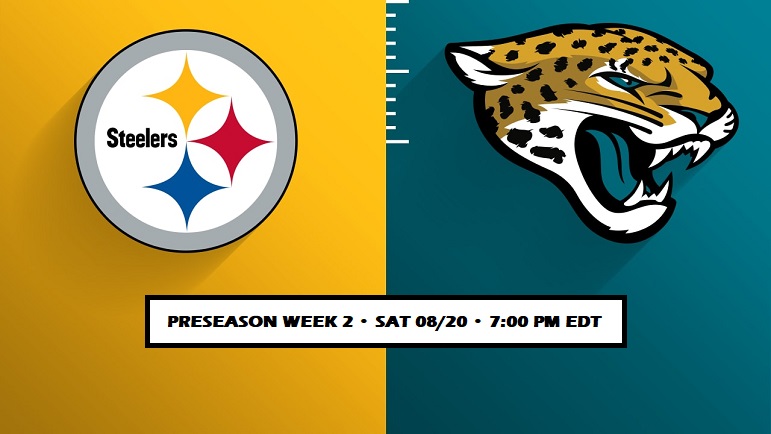 In anticipation to the Pittsburgh Steelers second preseason game on Saturday, I wanted to look at a few things before I can provide information after the game. In the preseason we get an opportunity to see more action from the younger players, so I wanted to put a table together of how the 2022 draft played out for the Pittsburgh Steelers and the Jacksonville Jaguars heading into the game: 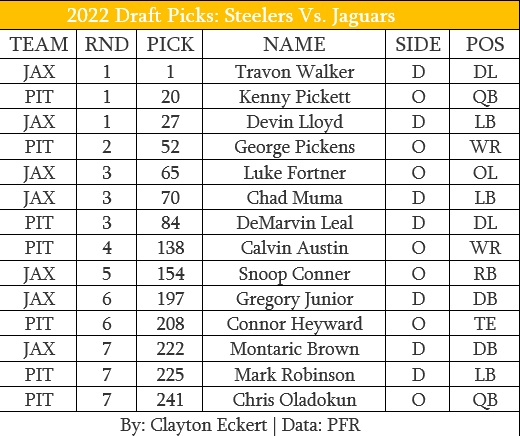 Other than getting a reminder of how the draft went for both teams, I also saw some fun takeaways. Each team came away with seven players, with Jacksonville prioritizing defense with five of their selections. Interestingly, Pittsburgh selected the same number of offensive players, creating an even split of draft picks on both sides of the ball. On the first two days of the draft, the Jaguars had four selections, with three of those on defense, two of which were in the first round. Their next pick was in the fifth round, then closed things out with two defensive backs in the final two rounds.

Specifically for Jacksonville, I really enjoyed their first two days of the draft in particular. They opened the 2022 draft with the top overall pick, selecting edge rusher Travon Walker. He received the highest Steelers Depot Draft Grade in a very strong class at the position, and has shown his athleticism (9.99 RAS) along with flashes of disruption in the Jaguars first two preseason games to date. Walker has 25 snaps, three total pressures, and a sack. His opportunities have all come on the right side, so if this holds true Steelers tackle Dan Moore should get a good test this week. Linebacker Devin Lloyd was Jacksonville’s other first round selection, who also received the highest Steelers Depot draft grade at his position along with good athleticism (9.58 RAS). He has yet to play in the preseason due to injury and that will remain the case for Saturday night.

In the third round, the Jaguars grabbed another expected starter in center Luke Fortner with their first selection on offense. I really liked him in the draft process, and though the Steelers did not draft an offensive lineman, he fit what the Steelers look for and had interest in him. Fortner has played 48 snaps this preseason, struggling as a pass blocker in the Hall of Fame game but showed improvements in their second outing. It will be interesting which interior defensive lineman play for the black and gold and how theses matchups pan out. Five picks later, Jacksonville got another linebacker and Steelers Depot favorite in Chad Muma. This continued the trend of athleticism on defense (9.77 RAS) along with players that fit what the Steelers look for. He has 50 snaps thus far with four solo tackles, three assisted tackles, but two missed tackles and has seemed to struggle in coverage.

With no fourth round pick, Jacksonville’s next selection at pick 154 was running back Snoop Conner. He continues a common theme, emphasizing the two squads battling on Saturday having very common tastes in what they look for (bigger bodied back in this case). He has 27 offensive snaps so far with 11 attempts for 31 yards (2.8 YPA) and created 22 of his yards after contact, along with three catches out of the backfield.  The Jaguars sixth round pick was cornerback Gregory Junior, who has 42 preseason snaps and seems to be playing well as a run defender and tackler but has had struggles in coverage. Their final pick in the seventh round was also a cornerback, Montaric Brown. He has played 58 preseason snaps and has struggled particularly in coverage in his opportunities. Will be interesting to see how the two late round corners fare against Pittsburgh’s receiving corps if given the opportunity.

As I said my last preview, the obvious main focus for the Steelers preseason is the quarterback position. Each quarterback fared well, especially Mitch Trubisky in limited time and first round pick Kenny Pickett. I charted pass locations for each quarterback, and Pickett’s great 13/15 debut was impressive. Want to see if he pushes the ball down the field more and would especially like to see some deep middle from him but most importantly continuing to take what the defense gives him. He has been getting second team reps in practice, so can’t wait to see what Saturday night brings with more of the roster expected to play. Hopefully the offensive line can keep him cleaner considering he was sacked twice in his debut.

Second round wide receiver George Pickens had an great debut as well, with three catches and 43 yards including the corner of the end zone touchdown, along with some impressive run blocking. I agree with our own Tyler Wise’s twitter take, hopefully seeing him use his speed more to his advantage on vertical routes as I similarly stated in my game recap. Many of us know Pittsburgh lacked in explosive plays last season and really want to see this from Pickens this game. While his touchdown was of the explosive variety, his two incomplete targets were also, and would be huge to see a high connection rate on moving forward.

Quick side note, as a team Pittsburgh had five explosive plays in the preseason opener, two of which were encouragingly runs (running back Anthony McFarland and wide receiver Steven Sims), one a yards after catch play from wide receiver Gunner Olszewski, and the other two were touchdowns to Pickens and the game winner to wide receiver Tyler Vaughns. Will be interesting to see how this looks moving forward.

Defensive lineman and third round pick DeMarvin Leal showed some encouraging things as a pass rusher but a missed sack opportunity. He seemed to tackle well otherwise, something I’ll have my eye out for considering the concern I had for him coming out of college in my studies, along with a hopeful positive trend on run defense. Leal’s opportunities came primarily on the left side at defensive end, along with ample defensive tackle reps, and even one from the outside edge. Fourth round wide receiver Calvin Austin has yet to make his preseason debut, and unfortunately we will need to remain patient as he will be out for at least one more contest.

We saw sixth rounder Connor Heyward get plenty of opportunity with others sidelined last game, with 26 tight end snaps and nine as a slot receiver, catching two of his four targets. He had ups and downs as a blocker (more of the latter) and a false start penalty, but encouraged overall, with his hands as a receiver and especially on special teams with a team high two tackles but missed a third opportunity. Hopefully Heyward can trend upward with more consistency in his next opportunity.

Linebacker Mark Robinson, the team’s first seventh round selection, had an up and down performance to put it mildly. Alex Kozora has noted some positive things regarding Robinson in coverage, but that did not translate to the stadium in his debut with obvious struggles. Definitely will monitor this moving forward. He also struggled reading and disengaging from blocks in the run game at times. Robinson did provide three stops (unsuccessful plays on tackles) but had a missed tackle as well. He also played two snaps as an edge defender, providing the all-important strip sack and takeaway that led to the game winning drive for Pittsburgh. Will be interesting to see if he can display steadier play as the preseason progresses.

Quarterback Chris Oladokun received his first training camp reps in team, but the opportunities will obviously be dominated by the three quarterbacks ahead of him on the depth chart barring injury. Will be interesting to see if he gets any stadium time in the preseason. My favorite non-rookie player I’m looking forward to is linebacker Myles Jack’s and his return to Jacksonville.

Which rookies are you most excited to see (if given playing time)? Who are your favorites to perform well? How about non-rookies? Thanks for reading and let me know your thoughts in the comments!