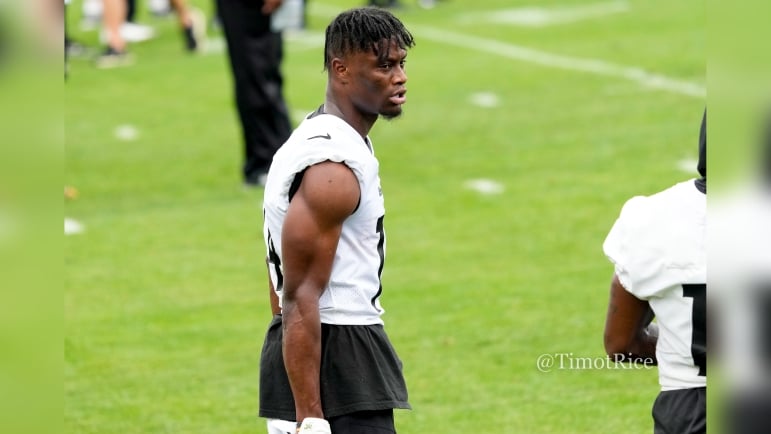 With just one game left in the first week of the NFL preseason, all but two teams have now seen their rookies play in pads. According to Pro Football Focus, the highest graded player thus far is none other than the Pittsburgh Steeler’s 2022 second-round pick George Pickens.

Per Pro Football Focus, Pickens is graded at 91.2, which constitutes an “elite” category performance. For context, Las Vegas Raiders receiver Davante Adams earned a 92.7 grade in the 2021 season.

As has been the case from the pre-draft process to training camp, Pickens did not mince his words regarding his confidence in his abilities. Aside from his play as a receiver, Pickens also had several impressive run blocks, proving that he does not shy away from physicality.

“Yeah, dude,” Pickens stated in a post-game transcript provided by the team when asked whether his emulating his training camp performance in Acrisure Stadium was validating. “Just to get the feel of the game. That’s really the most important part. I’ve been doing the same thing I’ve been doing at practice.”

In 21 snaps, Pickens saw five targets and caught three passes for 43 yards and a touchdown. In doing so, he caught passes from quarterbacks Mitchell Trubisky and Mason Rudolph. Pickens was pulled from the game after a few drives, which is unusual for second-round rookies in the preseason, and also perhaps speaks to the team’s confidence in him. His performance was marked by the 26-yard touchdown from Rudolph, where he beat Seahawks’ rookie cornerback Coby Bryant for a toe-tap touchdown.

“Just off the adjustment of my body,” Pickens said when asked about the touchdown. “I saw how I landed, and I figured that my feet went dead, and I made the catch.”

For context, this PFF grade is based on 21 snaps against a pre-season lineup and does not necessarily mean that he will play like a top-3 receiver this coming season. At the very least, however, it is beyond encouraging that Pickens was able to emulate his high-level training camp performance in pads.

“This is what I expect,” said Pickens when asked whether he was surprised by his stellar performance. “That’s what I was telling people at the Combine. The type of player I am. The type of dude I am. Instead of going off analytics, I wanted to show people that I could really play.”

Indeed, this preseason opener was the rookie receivers’ first opportunity for Pickens to prove that his training camp performance is not just a fluke, and it’s safe to say that he has done so thus far.

At this point, it is hard to not be excited for Pickens, as well as the Steelers receiving core as a whole. The Steelers will have both Pickens and the recently re-signed receiver Dionate Johnson for the next several seasons with no current lack of depth behind the two. Paired with second-year tight end Pat Freiermuth and running back Najee Harris, whoever starts at quarterback will have no shortage of weapons this coming season.