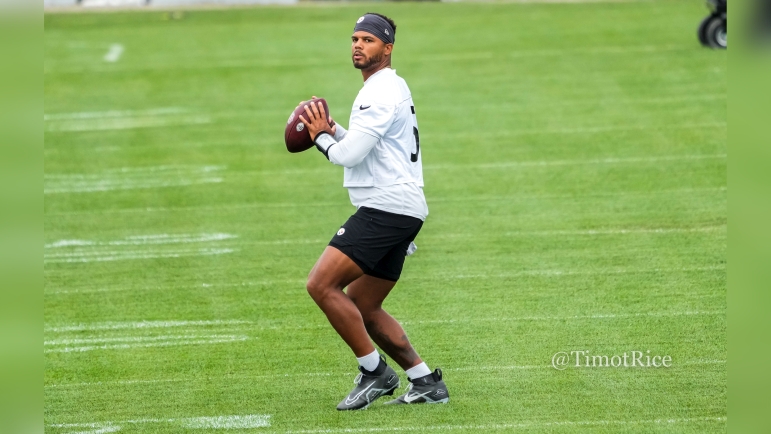 Sitting behind the likes of veterans Mitch Trubisky and Mason Rudolph, and fellow rookie first-round pick Kenny Pickett, Oladokun hadn’t seen a single rep in a game-like setting throughout training camp and the preseason. That all changed Wednesday in Latrobe as the seventh-round quarterback saw seven reps in team sessions, finishing 3-for-7 on the afternoon with one near interception on the final play of practice to fellow seventh-round pick Mark Robinson, according to Steelers Depot’s own Alex Kozora.

Following practice, head coach Mike Tomlin was asked about his rookie seventh-round quarterback finally getting some reps in practice, giving the coaching staff a chance to really get a solid look at him in the Steelers’ offensive scheme overall, even if it was limited to just seven reps.

“He did some good things. He’s been working diligently, he’s locked in,” Tomlin said to reporters following Wednesday’s practice, according to the official transcript provided by the team. “I appreciate his approach to business, the level of maturity that he’s displaying, and it’s only a matter of time before he gets more physical reps to show what he’s capable of.”

Hearing Tomlin praise Oladokun’s work off on the side and remaining prepared overall to step in at a moment’s notice is huge for a rookie quarterback, especially a seventh-rounder like Oladokun. For nearly three full weeks now he’s sat mostly inactive in training camp, getting some throws in here and there in individual drills for the quarterbacks, and even some post-practice throws in with receivers and tight ends looking to get more work.

He gets four reps to give him seven on the day. Goes 1/4 in that final session and should have been picked by Mark Robinson on the final play. Practice is over.

Still, on Wednesday he showed he was ready to go and had a solid grasping of the playbook. It can be frustrating for any player at any level to not get any reps and have a chance to prove themselves, but Oladokun has taken it all in stride, which pleased Tomlin.

While he likely won’t see any action Saturday in Jacksonville, there’s a good chance Oladokun plays a majority of the preseason finale against the Detroit Lions at Acrisure Stadium on August 28, where Tomlin alluded to him getting more physical reps to show what he’s capable of.