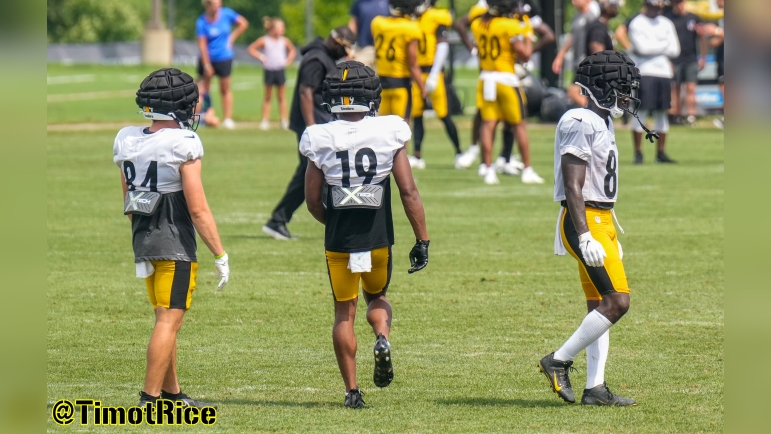 Pittsburgh Steelers rookie WR Calvin Austin III suffered a foot injury last Friday prior to the team’s first preseason game against the Seattle Seahawks, forcing him to miss the team’s first exhibition game of the summer. Mike Tomlin mentioned after the game that he would hope to get Austin back “sooner rather than later”, yet the fourth-round rookie out of Memphis failed to suit up at all this week while being hampered by the ailment.

On Thursday afternoon, Austin’s prospects of seeing his first preseason action Saturday got pulled on hold for yet another week.

Speaking to the media in a press conference prior to practice Thursday, Mike Tomlin said that Austin would not play Saturday against the Jacksonville Jaguars due to the foot injury suffered last Friday, according to Steelers sideline reporter Missi Matthews.

This shouldn’t come as a surprise since Austin missed all practice sessions this week in lead-up to the game. While Austin was seen wearing a boot on his left foot, Alex Kozora of Steelers Depot mentioned that he didn’t see him walking with a noticeable gimp in his step, potentially a good sign of the injury being more minor in nature like Tomlin alluded to when he first announced the foot issue for Austin.

Rookie WR Calvin Austin (foot) walked down the stairs without a noticeable limp. But he isn't practicing today. WR Miles Boykin (ribs) is back after missing Monday. #Steelers pic.twitter.com/6fhdpCSLQo

Austin was having a strong start to training camp before suffering the foot injury, showcasing his speed and run after catch ability in practice. He has drawn praise from the likes of Cam Heyward as well as ESPN’s Adam Schefter, who said that Austin also has had an impressive start to camp alongside rookie WR George Pickens. Austin’s debut as a Pittsburgh Steeler may be put on hold a while longer as he works his way back from the injury, but hopefully we will get to see him take the field early on in the regular season should he not make it back in time for Pittsburgh’s final preseason game against Detroit.