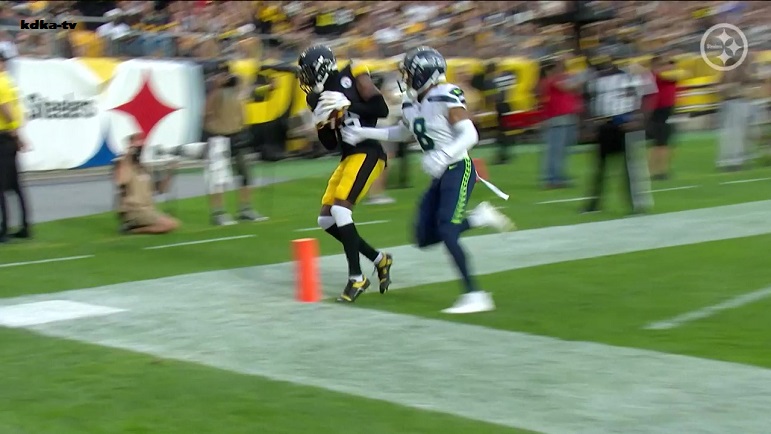 The Pittsburgh Steelers defeated the Seattle Seahawks in stunning fashion Saturday night at Acrisure Stadium to the score of 32-25. The Steelers scored the game-winning TD with three seconds left on the clock as Kenny Pickett found Tyler Vaughns for the score. Pickett shined in his rookie debut, completing 13-of-15 pass attempts for 95 yards and two TDs.

While Pickett’s performance was probably the most anticipated of any Steeler Saturday night, WR George Pickens wasn’t far behind him. Pickens had been on a tear all training camp, making highlight reel catches in contested coverage while displaying impeccable body control and leaping ability to climb the ladder and come down with difficult catches.

The question was whether Pickens could have that success in practice translate to games against NFL competition. To put it bluntly… yes, it did. Pickens only played 21 snaps on Saturday night, and made quite the impact in that limited showing, catching three passes on five targets for 43 yards and a TD.

Pickens’ first catch came on the first play from scrimmage at the 14:54 mark in the first quarter. Lining up in the shotgun, Mitch Trubisky snaps the football and immediately targets Pickens on the left sideline coming back to the ball on a curl route. Pickens makes the catch after getting a step of separation on Tariq Woolen as he comes back to the ball and then turns up field after the catch, getting a couple of extra yards until he is pushed out of bounds at the PIT 19 for a nine-yard gain.

Not only did Pickens stick out as a receiver, but his willingness as a blocker also flashed on Saturday night. Pickens has shown to be a physical blocker during his time at Georgia, and that seems to translate to the NFL when we watch this play, as he puts #8 Coby Bryant on his backside as the pitch goes to Anthony McFarland Jr. Pickens’ length and aggressiveness aids in his ability to get hands on the CB first as he fully extends to knock him to the turf.

Pickens’ next play would end up being his TD in the back corner of the end zone. With 1:46 left in the first quarter, Mason Rudolph snaps the ball from the shotgun and fires the pass deep right down the sideline to Pickens, who takes Bryant vertically up the field. He gives a quick hesi step then accelerates past him on an outside release to get a step of separation. Pickens then turns his head to locate the football in the air and reels in the catch over the shoulder while simultaneously sticking both feet in bounds for the 26-yard touchdown.

Here is a frontside view of the same play, showcasing Pickens’ ability to track the football, make the catch, and tip toe his feet in bounds for the TD strike. This shows impressive spatial awareness and body control from Pickens on his first TD in the pros.

Pickens would get one more reception in the contest before Pittsburgh decided that they have seen enough and pulled him for the rest of the evening. At the 10:25 mark in the second quarter, Rudolph takes the snap from the shotgun and looks toward Pickens on the top of your screen. Pickens breaks to the sideline on the out route as Rudolph fires the pass toward the sideline. Pickens makes the catch as the defender attempts to push him out of bounds. Pickens again shows off his body control, turning like a ballerina along the sideline as he snags the pass and keeps both feet down in bounds for the catch at PIT 39 for eight-yard gain.

Overall, it was an impressive showing for Pickens on limited snaps, showing that he can gel with multiple QBs and showcase those same traits he had put on display in practice on an NFL stage. His ability to get separation in short spaces as well as get over top of the defense is a key trait at drawing targets, something he will have to continue to show as he goes against some of the better cover corners in the league at times this season.

Pickens also showcased his spatial awareness to locate the football and make the catch with defenders coming down on him, having the body control of a smaller receiver to make the catch in-bounds and complete the process of the catch. On top of that, Pickens showed that he was more than willing as a blocker, getting physical with defensive backs and even linebackers and defensive linemen at times during the contest, living up to Frisman Jackson’s teaching of being a more aggressive unit when it comes to sticking your face in the fan and picking up defenders to help in the run game.

Pickens still has a lot that he can work on in terms of the nuances of his route running, but there is a lot to like from his limited sample size on Saturday night. We shouldn’t be shocked to see Pickens line up in three receiver sets to start the regular season given what he has done this far. Now, he just needs to continue to stack good practice sessions and preseason contests together to earn a high snap share as a bigger part of the Steelers’ passing game than what was assumed he would have going in as a rookie.

What are your thoughts on George Pickens’ performance Saturday night? Do you think he showcased the ability and talent to become a big part of the passing game this season? Do you see him pushing for a high snap share come Week 1 of the regular season? Please leave your thoughts in the comments section below and thanks again for reading!