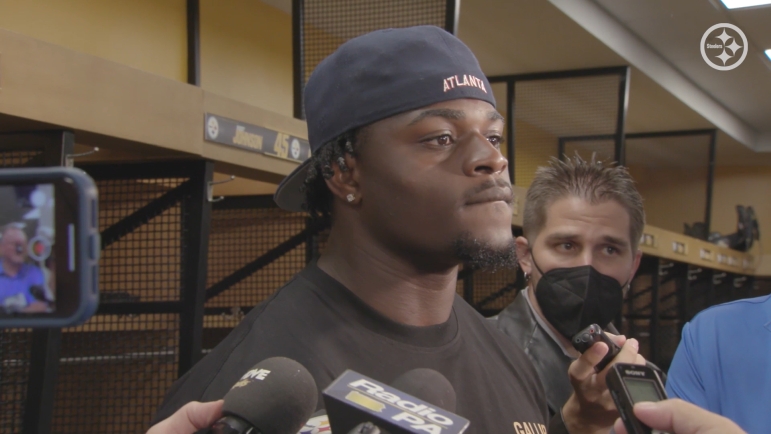 Mark Robinson walked away from Saturday night’s game as the likely defensive MVP for his performance when the game mattered most. Many will look toward Pittsburgh’s final drive led by Kenny Pickett who threw the game-winning TD pass with three seconds left in the fourth quarter, but it was the strip-sack fumble caused by Robinson with 1:17 left in the game that got Pittsburgh the ball back inside enemy territory, setting the offense up for the scoring opportunity.

When asked about his sack forced fumble that became the catalyst for Pittsburgh’s final offensive drive, Robinson just was grateful for the opportunity to make a play for his fellow teammates that helped secure the victory.

“Getting us out of here with a win,” Robinson said in the locker room Saturday night to the media on the team’s YouTube channel. “Glad I can make a play to help everybody, but you know, we going to break down the film, get back to work, and try to get another one next week.”

Robinson’s name has been floated around in training camp as a player that has impressed thus far given his sixth-round draft status. Seeing as he is battling for a roster spot with the likes of Buddy Johnson and Marcus Allen, anything Robinson can do both in practice as well as in preseason action will only help his case. The turnover he created last night is one of those moments he needs to continue to have in order to make on the Steelers’ 53-man roster come the regular season.

When asked about how the veterans of the team reacted to the splash play he made, Robinson grinned as he couldn’t contain the joy he felt in the moment of doing right by his team and helping the Steelers win the game.

“Oh man, they loved it,” Robinson answered. “They loved it. Those are my guys, man. So, anytime I get a chance to go out and do good, I know they are going to have my back a thousand percent. That’s the type of team we got.”

Mark Robinson was seen as a raw player coming out of Ole Miss after only starting at linebacker for one season. He was originally a running back at Presbyterian before transferring and profiled more as a downhill run stuffer. However, he has shown traits in coverage you like to see at the position according to Alex Kozora’s training camp scouting reports, and showcased last night he can be an effective blitzer when asked to do so.

He will have to continue to make plays on defense as well as prove his value to Danny Smith on special teams, but should Robinson continue to build off the momentum he has coming off Saturday night’s performance, he could be set up to win the backup job at ILB this season.