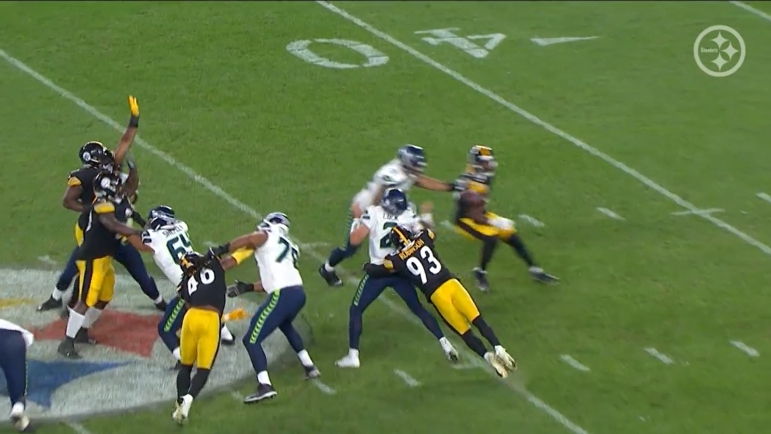 The Pittsburgh Steelers returned to preseason action with a thrilling 32-25 victory over the Seattle Seahawks Saturday night at Acrisure Stadium. The game-changing moment that likely sealed the victory for Pittsburgh occurred late in the fourth quarter as the Seahawks approached midfield with the game tied at 25 apiece. With a 1:17 left, Seattle snapped the ball and rookie LB Mark Robinson came off the edge, drilling #2 Drew Lock in the back to force the ball out on the strip sack. Pittsburgh would then recover the ball and take possession inside Seahawks territory.

When asked about the sack strip fumble by Robinson which ended up being recovered by OLB Tuzar Skipper to put Pittsburgh in position to go take the lead at the end of the game, Tomlin praised Robinson’s efforts when he needed to make a play.

“You know, it’s a big play,” Tomlin said on Robinson during to postgame press conference which aired on the team’s YouTube channel. “Not only for him, but for us. Situational splash playmaking to secure victory. We value that.”

The Pittsburgh Steelers have been traditionally known for having a vaunted defensive unit that would stifle opposing offenses and keep them off the board. They have also boasted defenses including the likes of Troy Polamalu, James Harrison, and others that always seemed to come up with the big splash play to help win the game when the team needed it. Tonight, in the first game of the preseason, rookie Mark Robinson got to play that role for the Steelers defense, coming up big in crunch time by getting the ball back to the offense in which Kenny Pickett would throw the game-winning TD pass to Tyler Vaughns.

Robinson has flashed at times throughout training camp, showcasing impressive development and adjustment to the speed of the NFL game for only playing one season at LB at Ole Miss after converting over from RB. It’s only one game and Robinson will have to build off of his NFL debut to win a roster spot, but those splash plays underneath the lights often are the catalyst to help players like Robinson win a roster spot.