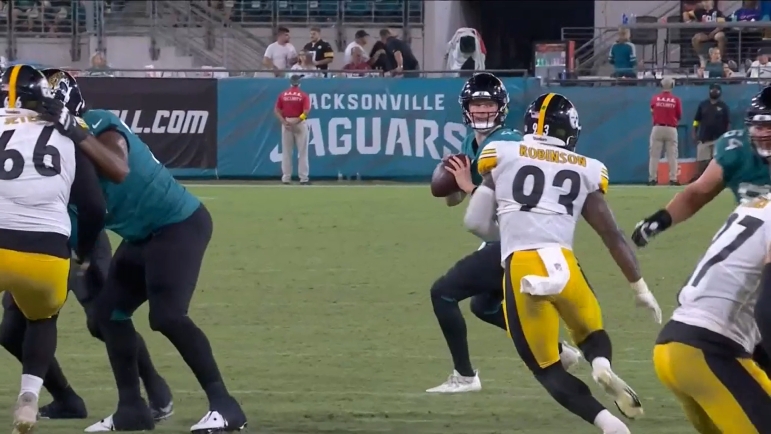 What is a late-round draft pick worth? Well, it depends entirely on the player upon which the selection was used to draft. If a sixth-round pick was used to draft Colin Holba, then it didn’t end up being worth very much.

But when you use a sixth-round pick and get a player back like Vince Williams then it can be pretty valuable. The NFL Draft is subject to the law of diminishing returns, as one would expect, but it is well established that good players can still be found with more than 250 players already selected—including among players who don’t get drafted at all.

Mark Robinson could potentially be another ‘find’ for the Pittsburgh Steelers this year in the seventh round, after apparently hitting on Tre Norwood in the seventh round a year ago. Indeed, Williams, a late-round pick at inside linebacker back in 2013, even thinks that the team’s newest late-round inside linebacker is better than he was at the same point in his career.

Mark Robinson is better than I was as a rookie. I hope he keeps #93

I said as a rookie 😉 lol

Robinson was drafted out of Ole Miss this year after having only just recently converted to the position, his background actually coming on the offensive side of the ball at running back. Indeed, he transferred to Ole Miss while still a running back, only to be convinced to move to inside linebacker.

In spite of his limited time learning the position, it has to be said that the rookie doesn’t look like somebody who is lost. He plays with very good instincts, in fact, given his accumulated experience playing inside linebacker, and he knows how to deliver a hit—two traits that defined Williams as a player and earned him millions of dollars.

Williams revealed just before training camp a year ago that he was retiring, leaving behind a successful eight-year playing career during which he logged 69 starts in 121 games, amassing 479 tackles, 50 tackles for loss, 20.5 sacks, and two interceptions. One of the most baffling sports statistics to me remains the fact that he never forced a fumble.

Could Robinson be the next Vince Williams? He may have a slight advantage on the athletics side, and truth be told, he’s looked more fluid and comfortable in coverage than anticipated, but needless to say, he’s still got a long way to go.

He does very much appear to be inside the roster bubble, potentially at the expense of either Buddy Johnson, a second-year former fourth-round draft pick, and maybe even veteran Marcus Allen, as well. As he kicks off his career, he’s going to have to establish himself as a special-teamer, as Williams did. He’s played a little bit on just about every unit, but will need to do even more in the regular season.