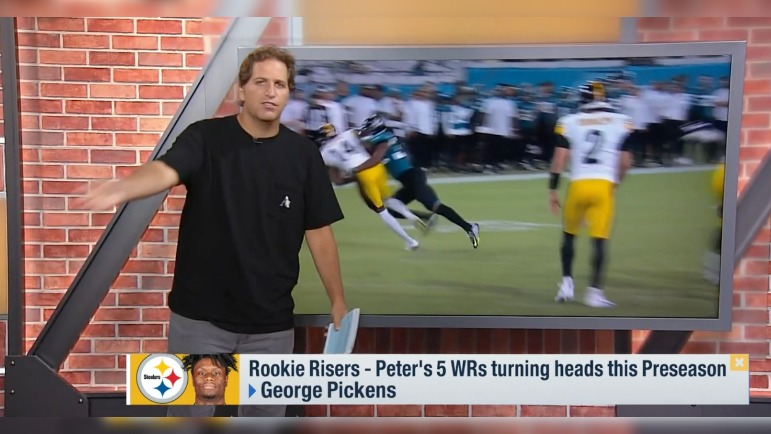 On Tuesday’s edition of GMFB on NFL Network, show host Peter Schrager held a segment called “Five rookie WRs turning heads in preseason”. Coming in at #2 of his list of rookie WRs is none other than Pittsburgh Steelers WR George Pickens.

“Number two, I’m going with George Pickens,” Schrager said on GMFB. “The best catch of the summer I think, and I put this up against anybody. In a game. In the corner against a good quality defender there. This is him in the back of the end zone. He gets the toes in. He does it against Coby Bryant who is a rookie out of Cincinnati.”

The play that Schrager is referencing above is the impressive TD catch that Pickens made in his preseason debut against the Seattle Seahawks. With 1:46 left in the first quarter, Mason Rudolph got the snap and threw a pass deep right down the sideline to Pickens, who was in one-on-one coverage against the fellow rookie Bryant. Pickens managed to get an outside release and a step of separation, and made the catch over the shoulder while simultaneously sticking both feet in-bounds for the 26-yard touchdown.

Pickens caught three passes on five targets for 43 yards and a TD against the Seahawks but had more of a quiet outing last weekend against the Jaguars, catching both of his targets for only six yards on the night. Still, Pickens has been taking training camp by storm, making acrobatic catches routinely in practice sessions and drawing rave reviews from his teammates and coaches alike. The way Schrager sees it, it may be only of matter of time until Pickens is viewed as the #1 target in the Pittsburgh passing game.

“Again, I think we got Diontae Johnson,” Schrager continued. “We got Claypool. Is Pickens your #3, or is Pickens your #2 or by the end of the season, is Pickens your #1? He has all the athletic ability in the world, and he might be in the right place to harness all of that.”

For context, Pickens did operate as the team’s second WR behind Diontae Johnson Saturday against the Jaguars. He recorded the second-most snaps with the first team offense at the position, beating out Chase Claypool 21-to-16 and operating out wide in three receiver sets with Claypool in the slot. Still, Claypool figures to go back outside in two-receiver sets when Pittsburgh goes more run heavy with their offensive package, at least initially to start the season.

Still, Schrager may have a point with Pickens climbing the depth chart sooner than most would expect. Claypool has been inconsistent at times and appears best suited for a big slot role in the offense, meaning Pickens will see the field early and often in 11 personnel. It wouldn’t be a shock to see Pickens start eating into Claypool’s snaps outside in heavier personnel groupings the more he becomes acclimated to the offense and earns the trust of the coaching staff. It may be a stretch to suggest that Pickens could pass Diontae Johnson in the pecking order, but given his immense upside and what he has shown thus far, it wouldn’t be shocking to see Pickens overtake Claypool as WR2 in Pittsburgh by season’s end.