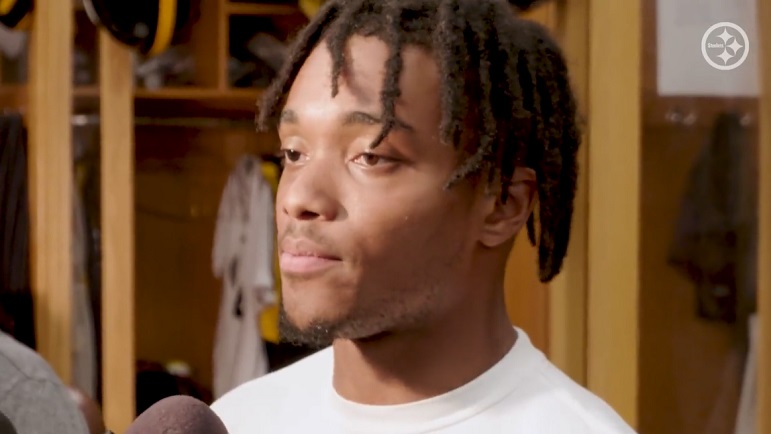 Pittsburgh Steelers rookie wide receiver Calvin Austin III is with his teammates every day of practice. Just not in the way he envisioned. Austin has been sidelined for more than two weeks due to an undisclosed foot injury. The more time he misses, the further away that moving train gets. Speaking to reporters Friday, Austin admits the struggle in being hurt.

The exact nature of his foot injury is unknown. After suffering the injury in camp, he walked around the practice field without a boot and without a limp, catching stationary or walking in a line to catch passes alongside WRs coach Frisman Jackson. So the injury doesn’t seem to be incredibly serious. Of course, it’s obviously serious enough for him to miss the whole preseason, too. Austin isn’t expected to return for Sunday’s finale against the Detroit Lions.

After a good initial showing in camp, Austin’s fallen behind. He’s now in danger of not even dressing in Week 1. But he’s said his teammates have kept him in the fold.

“They’re keeping me positive too, encouraging me asking me how I am. So that’s good too.”

When healthy, Austin caught 14 passes during training camp for 192 yards, a team-high 13.7 yards per catch. His summer was highlighted by a 76-yard touchdown on a nine-route down the left sideline. Focusing on his play, here’s what we wrote in our post-camp review:

“Austin did most of his damage deep downfield or at/behind the line of scrimmage, getting involved in the jet/pop pass game and showing quickness. He carried the ball four times for 21 yards…he needs to make more an impact in the middle of the field and his catch radius is small, leading to drops and passes that clang off his hands, dropping two passes and missing a couple other opportunities due to his frame.”

Unfortunately, it’s also been lowlighted by injury. Others have stepped up in his place. Chase Claypool looks comfortable in the slot while Gunner Olszewski has had a nice summer and could rotate in the slot for 10-15 snaps per game.

Austin’s speed is tantalizing and he has nearly three weeks to get healthy for Week 1. But his rookie season is off to a rougher start than anticipated. The silver lining is Pittsburgh’s receiver room is deep and talented and can compensate for Austin’s injury and the time it takes for him to get back up to speed.