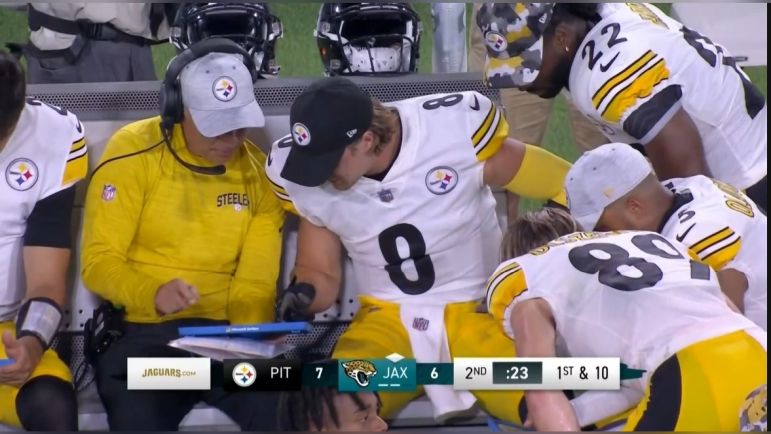 Here I am – yet again – writing about how good Kenny Pickett looked last night. How could you not? Pickett again showed why he was the Pittsburgh Steelers’ top-rated quarterback and the “pro-readiness” that made him a more advanced and refined prospect than his peers. He’s been fantastic in situational football, and there’s no better example than what he did to close out the first half last night, leading to Pittsburgh’s first points of the night.

With 1:05 on the clock, two timeouts, and the ball on their own 37, Pickett took over. He ran the show, going 4/5 for 63 yards and a touchdown, his lone incompletion a spike to stop the clock. He made smart and high-level plays on the drive to put the ball in the end zone. Here, we’ll look at each of those throws.

First one of the drive. 17-yard completion to Diontae Johnson. 3×1 formation with a slant/flat combination to the boundary side at the bottom, the back leaking out on the flat with Johnson running the slant. A “tare” route, two five-yard outs with #1 vertical to the top.

Pickett works the slant/flat combination. He patiently waits for the underneath linebacker to expand to the flat on the back as Johnson clears behind him. Puts the ball right on the money for what Matt Canada would call a “YAC throw,” allowing Johnson to never break his stride and turn upfield. That turns into an extra ten yards of YAC with a shoestring tackle, the only thing stopping Johnson from a huge gain, maybe even a touchdown. This is money. 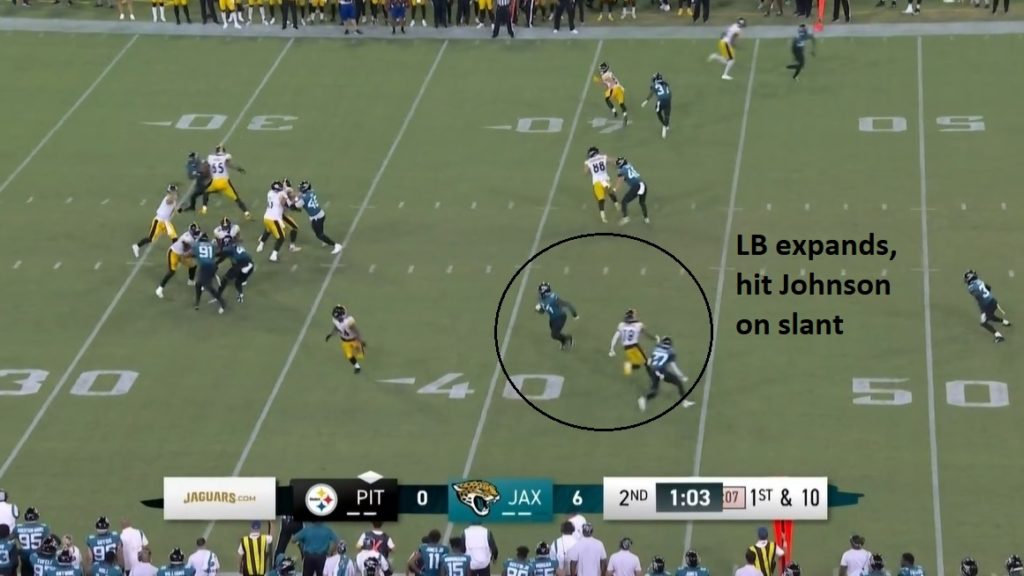 After a timeout, Pickett his tight end Pat Freiermuth for 11 yards. Not a difficult throw here but this is Pickett smartly “taking a profit.” Jaguars are playing a soft, loose zone in the middle, looks to be Cover 2, and Pickett hits Freiermuth on a five-yard stick route against it. He lets his big tight end do the rest and Freiermuth picks up a chunk of YAC and a first down, the offense staying ahead of the sticks.

Next throw was his best of the night, probably the best he’s had of his brief NFL career. 24-yard completion to Freiermuth down the left seam. Jaguars running a fire zone. Steelers blow the protection with RB Benny Snell and LT Dan Moore Jr. taking the slot pressure, leaving the linebacker – #48 – running free and barreling down on Pickett. Pickett’s looking down the belly of the beast and stands tall, hitting Freiermuth down the seam.

But it isn’t just an average throw. He anticipates and leads Freiermuth past the hook zone linebacker and in front of the safety. It’s zone coverage but Pickett leads Freiermuth to open grass on a perfectly thrown pass. A fearless play and throw by Pickett and a truly “high-level” moment.

After a touchdown to Diontae Johnson was wiped out by offsetting penalties, Pickett comes right back and hits Benny Snell for an 11-yard touchdown. Not fully shown below, but George Pickens is used on return motion to help identify man coverage. 2×2 formation with the Steelers running mesh and multiple routes to the middle of the field, creating a lot of trash for the linebackers to work through.

With the middle linebacker out-leveraged on the back pre-snap, Pickett quickly hits Snell in the left flat and puts him 1v1 with the trailing linebacker. Snell wins the battle, running through him and diving over the goal line for the score. Touchdown, Steelers. 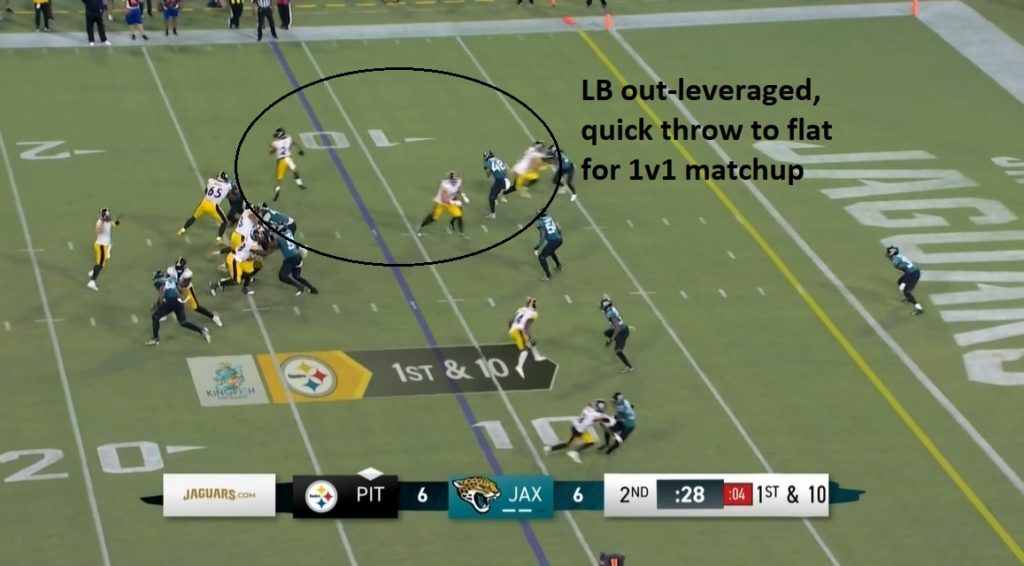