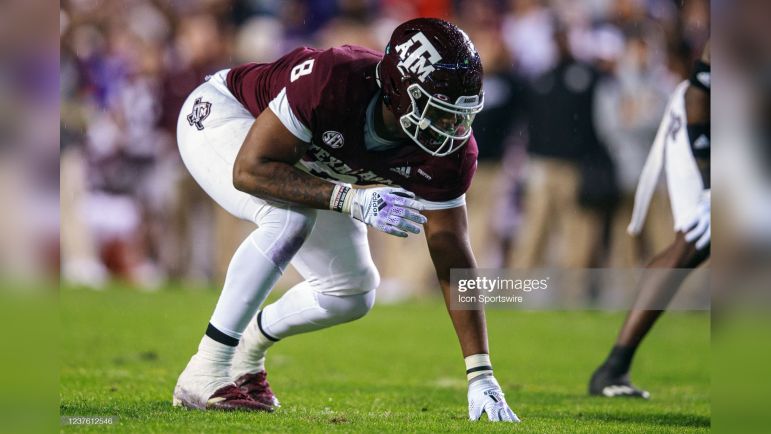 Continuing with the series, I wanted to look at and provide more context for the position in run defense last season using Sports Info Solutions (SIS) and Pro Football Focus (PFF). Similar to my pass rush study I’m focusing on players selected in the 2022 NFL draft, excluding any small school players that SIS did not track. The goal is to see how Pittsburgh’s third round pick DeMarvin Leal fared amongst his peers in their final college season. Quick note before we dive in: with varying schemes and opinions on position groups, we’ll view players who weighed in at 275 pounds or more considering this fits Pittsburgh’s draft history. 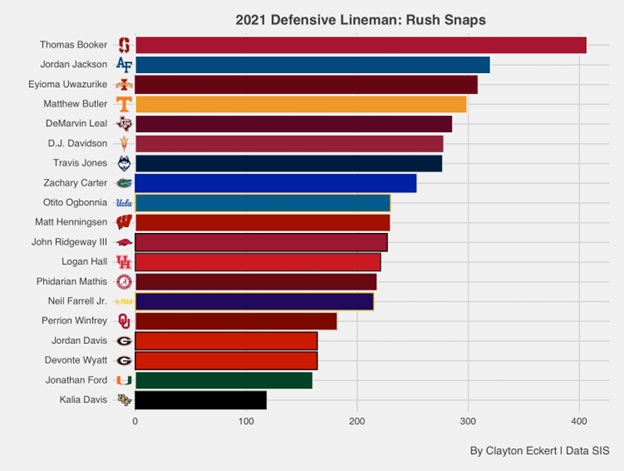 Leal had the fifth rank in rush snaps of the charted players, with less than 300 snaps playing the run compared to being on the field for nearly 400 on passing plays. Very important context to how he was utilized and as we continue with the data.

Now let’s add context to the players opportunities with tackles for loss and short of first downs, with the dot sizes highlighting the quantity with number of rush snaps: 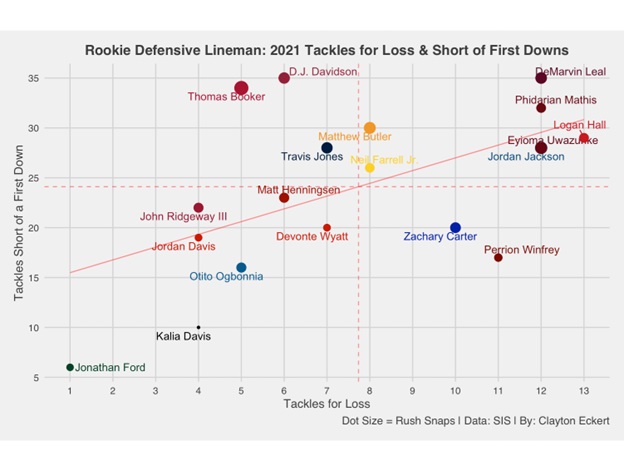 Right away we can see an aspect of Leal’s positive production in the run game last season, providing great value in both data points. Of the 19 players on the graph, he tied for first in tackles short of a first down.

His best game in this regard was against Ole Miss when he had five tackles on such plays. One was on good rep to stay on his feet following a chip block attempt from the pulling tight end, showing good pursuit to make the tackle after a teammate missed his tackle in the backfield. Another was on a third and goal play from the two-yard line where he came off the line unblocked, and while his initial tackle attempt was poor and the running back shook him off to the ground, Leal did not give up and grabbed his ankle to help keep the play and ultimately the drive scoreless. To open the next drive, he again showed good effort pursuing the ball despite the run going the opposite direction and was there to make the tackle on the rusher’s cutback for a gain of only one.

Leal had at least two tackles short of the first in every appearance last season except for the South Carolina matchup, when he had none but was only on the field for eight rush snaps. One of his positive plays against Alabama came on second and goal, using his penetrating skills to swim outside the block and combine for the tackle short of the goal line. While it’s unlikely he will be highly used in red zone situations out of the gate, he provided value in this regard last season. It will be interesting to see how this looks when I dive into 2020 for the next study.

He tied for the second rank in tackles for loss, with two in each of the following games: Ole Miss, Missouri, and Mississippi State. One example also came against Ole Miss, when he rushed outside off the snap then used a swim move inside to beat the left tackle for the solid tackle and loss of one. Another came against Colorado, winning inside the left tackle and cut off the running lane on the loss of four. He had four games without a tackle for loss, which were Auburn, South Carolina, Alabama, and Arkansas.

To gain additional context in the tackling department, I wanted to view broken/missed tackle percentage (the percentage of attempted tackles that result in a player failing to bring down the ball carrier when they are in position to do so) along with broken tackle yards (the amount of extra yards gained as a result of broken tackles) allowed in these situations: 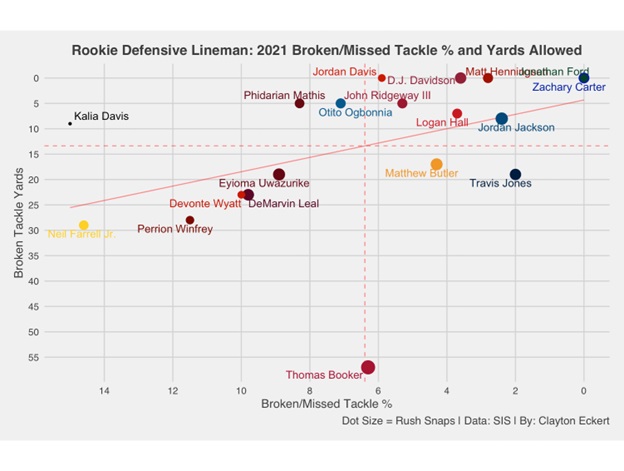 Here we see the other side of the statistical coin for Leal, landing below the mean in both data points. He had the fifth worst broken/missed tackle percentage along with being tied for fourth lowest in broken tackle yards. He had three games with a tackle attempt that was broken in each, including Alabama, Colorado, and Prairie View A&M which allowed the most yards (13) according to SIS. Against Missouri, he missed two tackles along with another miss against Mississippi State as well.

Even though the following don’t fall into the broken/missed tackle category, it’s well documented that Leal struggled getting off blocks in the run game. Early in the Ole Miss game mentioned earlier, he was sealed on the edge and unable to get off the left tackles block, allowing a lane for a 24-yard gain. Another similar result came shortly after, again unable to get off the same lineman’s block allowing a whopping 53-yard run. In the Colorado game, he committed to the running back immediately on a read option, losing edge contain and giving the quarterback an easy decision to keep for a huge gain. Jonathan Heitritter of Steelers Depot put together this film room that paints an excellent picture of Leal in the run game. Of the games mentioned in this study so far, he broke down the struggles just mentioned against Ole Miss, along with Arkansas, and a particularly poor performance against Alabama (which I’ll get to even more as we dive deeper).

Continuing with tackling in the run game, I wanted to view was the average tackle depth (the average number of yards gained when the player makes a tackle, with lower numbers suggesting a player who plays well up front and attacks the line of scrimmage) along with stop percentage from PFF (the percentage of a players run defense snaps where he was responsible for a stop, which are tackles that constitute a ‘failure’ for the offense). Failures are based off of the commonly used numbers for success rates, so an offensive gain of less than 40 percent on first down, 50 percent on second down, and any third or fourth down that did not result in a first down or touchdown: 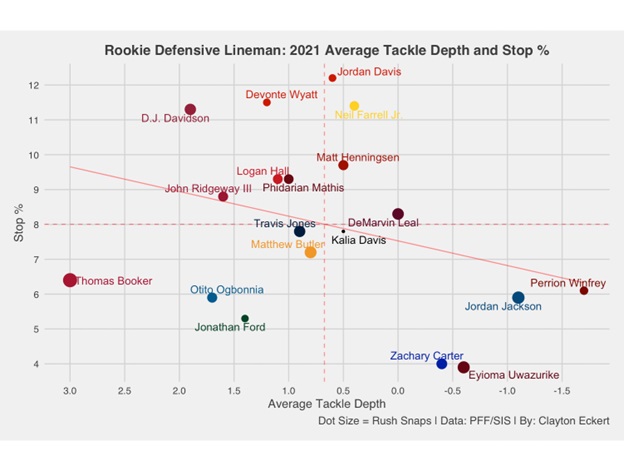 Interesting results overall after the previous views, with a lack of players at the top right of the graph. Leal’s best result was in average tackle depth, with the fifth rank at exactly zero yards. He had a particularly strong result in his performance against New Mexico with an average tackle depth of -4.7 on three tackles. This again emphasizes Leal’s ability in the run game when he wins with a move early to get free off his block and penetrate. The worst result last season was against Auburn when his number was 3.2 on five tackles. This highlights the flip side in games such as this, unable to get off blocks effectively largely speaking, his tackles mostly on successful run plays for the opposition (though he shows good pursuit/effort chasing the ball), and limiting his effectiveness behind the line against most higher level matchups last season.

His stop percentage was just above the mean at 8.3%, emphasizing the highs and lows last season of his game as a run defender. While his average tackle depth ranked high, we can see important context with only average value situationally when down and distance were factored in.

To close, let’s see how the players fared in PFF run defense grades: 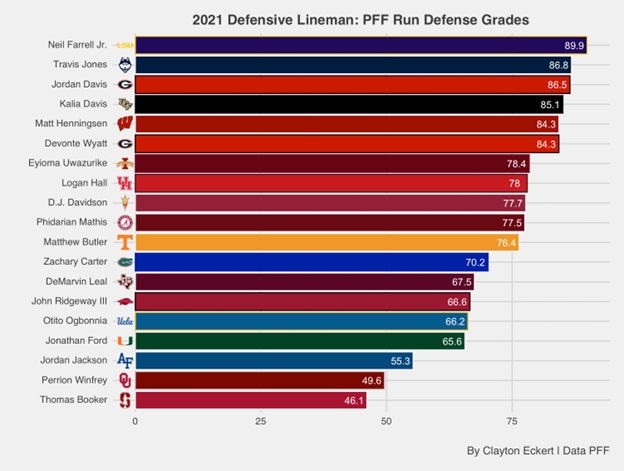 PFF’s run defense grade ranked 13th out of 19 players in their totality view of every play. Although there were some encouraging findings in the study, the grade is another data point that really emphasizes his limitations on the whole last season. His lowest graded games were against New Mexico, LSU (each in the 40-grade range), and his worst grade by far against Alabama (31.3). The latter game was his highest total snap count of the season, a takeaway of higher usage games being his worse outings that carried over from the pass rush studies along with poor tackling data highlighted earlier.

Overall, Leal was top five statistically in rush snaps, tackles for loss and short of a first down, and average tackle depth. He was around the mean in stop percentage which diminishes his stronger result in average tackle depth. His worst results were in broken/missed tackle percentage, broken tackle yards, and PFF run defense grade. So, some encouraging skills as Kevin Colbert mentioned after the draft, especially making plays in the backfield when able to win early. When putting on the tape, there are far more instances of inability to get off blocks which are reminiscent to the Steelers run game woes etched in our memory from last season. He does show good pursuit to the ball overall, regardless of where the play is headed. As mentioned in the pass rush studies though, endurance should be worked upon with Leal’s quality of play waning when total snaps were high. It’s encouraging to hear he has bulked up, highlighted by our own Josh Carney, and hopefully translating to additional strength against run blockers (only 17 reps on the bench at his pro day). This is crucial in my opinion in the hopes that Leal can become at least an average NFL run defender down the line, especially seeing his struggles against quality competition.

It will be interesting to see what Leal’s opportunities look like as a rookie, and especially interested to watch his development throughout his rookie year to see the beginnings of his growth into a hopeful starter down the line.

Throughout the rest of the offseason, I will dive deeper into the data as we continue to learn about the newest Pittsburgh Steelers. How do you think Leal will fare in his rookie year? Are you concerned with his run defense, or optimistic he will improve? What are some of your takeaways across the league? Thanks for reading and let me know your thoughts in the comments!