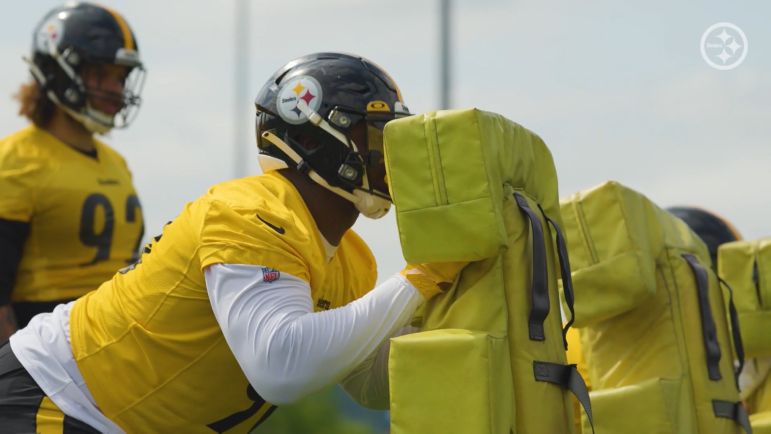 All the speculation and overall discussion surrounding Pittsburgh Steelers’ rookie third-round defensive lineman DeMarvin Leal and his weight — or lack thereof — can be put to rest for the time being, thanks to defensive line coach Karl Dunbar.

According to Dunbar, who spoke with reporters Wednesday prior to Day 2 of mandatory minicamp at the UPMC Rooney Sports Complex, confirmed that Leal has added 15 pounds to his frame, according to a tweet from the Pittsburgh Tribune-Review’s Chris Adamski.

When the Steelers selected Leal out of Texas A&M, he weighed roughly 290 pounds, which was the weight he recorded at his Pro Day in April. At the time of his selection, his weight was a bit light overall for a 3-4 defensive end in the Steelers’ system, prompting first-year defensive coordinator Teryl Austin to state during a session with the media after the selection of Leal that he’d need to put on some weight.

“I think if he’s gonna play in the base, yeah, that position takes a bigger man, and he’s got the frame to do it”, Austin said in late April regarding Leal, according to video via the Steelers’ official YouTube page. “I don’t see anything—I think he was probably playing at the weight he was because that’s where they needed him at his school. I have no reservations about him being able to fit anywhere in our scheme. Once he gets here, we’ll figure that out.”

With Leal in the building now and under the Steelers’ strength and conditioning regiment, he’s added 15 pounds, according to Dunbar, putting him right around the 305-pound mark, which his a great weight for him to be at with his size, speed, and overall versatility.

That weight gain overall though wasn’t something the Steelers were pushing entirely, at least according to head coach Mike Tomlin, who stated in mid-May that Leal was speculating if he believed the Steelers wanted him to add weight.

“He’s speculating if he thinks we want him to put on weight,” Tomlin said, according to video via the Steelers’ official YouTube page. “We’re just here getting to know him and his body and how it works. Oftentimes in draft preparation, guys hear things from NFL people, and they try to do what they think we want.”

Regardless of if the Steelers pushed for it or Leal wanted to do it himself to better handle a 3-4 base defensive end role, especially with the retirement of Stephon Tuitt, he’s in a much better situation to do so now in the NFL with that added weight behind him. We’ll see how it affects his burst and overall athleticism, which were certainly calling cards for him coming out of Texas A&M and caused an attraction from the Steelers.

For now, the weight concerns can be put to bed with him being over that targeted 300 number for the position and overall role. There’s a good chance he plays lighter than that in the regular season as most players lose weight throughout the regular season in general. But consider that a box checked for the young A&M product, one that likely endeared himself to some of his defensive coaches for the time being.