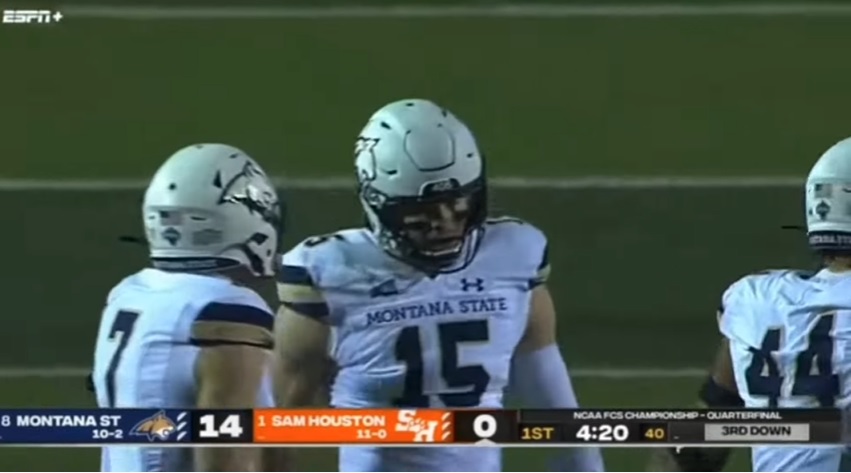 Today I wanted to look at the data from Kent Lee Platt’s Relative Athletic Scores (RAS) for the linebackers. Here is a link to his website in case you haven’t seen his work  https://ras.football/. To qualify for a RAS score, a player must have a total of six recorded metrics from any of the following: Height, Weight, Forty-yard dash, Twenty-yard split, Ten-yard split, Bench Press, Vertical Jump, Broad Jump, Short Shuttle, and 3-Cone. The player is then graded on each in comparison to the positional database since 1987 to get more of a feel of their size, speed, explosion, agility, and total value, giving context to the raw numbers. 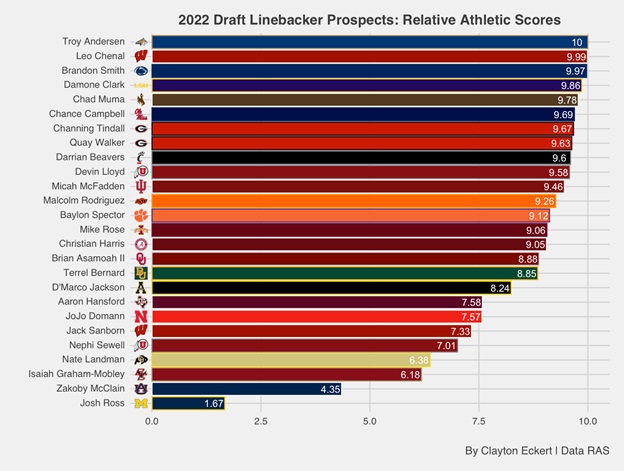 Two players have a below five RAS, highlighting below average results historically. The first is Auburn linebacker Zakoby McClain who has good speed, okay explosion, but very poor size and agility. Michigan linebacker Josh Ross has a very low 1.67 RAS and has okay speed, poor size, and very poor explosion and agility. We know the Steelers have shown interest with a  pro day dinner meeting though, and information I’m compiling on Steelers RAS draft history shows that he would set a new precedent for the lowest RAS score at the position since 2010 if Pittsburgh were to select him! 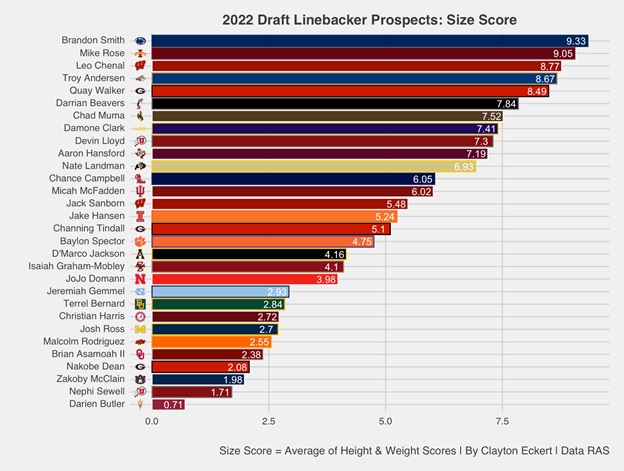 Here we see great context after the athleticism view, with more players having below five size scores and only two players above nine. Smith leads the position along with his high third ranked RAS! Rose was the other, pairing this result with a low nine RAS!

Three players have an above eight size score, starting with Chenal who pairs this with his near perfect and second ranked RAS! Andersen has the fourth ranked size score along with his perfect RAS! Walker is the final player of this group, and also has an above nine RAS that ranks eighth.

The following five players are the group with above seven size scores, beginning with Beavers who pairs this result with his mid-nine RAS. Muma has a mid-seven size score to go with his above nine RAS that ranks fifth. Clark pairs his size result with the fourth ranked RAS! Lloyd pairs his mid-nine RAS with his size result in the lower sevens. The final player of this group is Hansford, whose RAS was also in the seven range.

The group with above six size scores includes three players, starting with Landman who pairs his high-six score with the fourth lowest RAS in the low sixes and important to remember his poor speed. After a drop off to the low-six range, Campbell pairs this result with the sixth ranked RAS in the mid-nines. McFadden completes this group and pairs his low-six size score with an above nine size score as well.

Three players have size scores above five, and Sanborn tops this group along with an above seven RAS. Hansen is the next player of the group but didn’t work out fully. Tindall’s has a low-five size result and fares stronger athletically with a mid-nine RAS.

Close behind is Domann, the only player with a size score in the three range and pairs this result with a mid-seven RAS.

Ten players remain with size scores below three. Three of those players didn’t work out fully: North Carolina linebacker Jeremiah Gemmel, Georgia linebacker Nakobe Dean, and Arizona State linebacker Darien Butler who has a very low 0.71 size score! We can see the other seven linebackers clearly in this visual layering all the qualifying players RAS and size scores to wrap up: 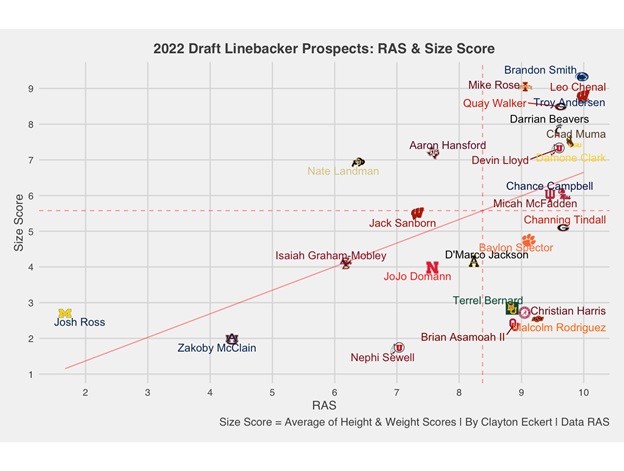 While we have numbers for most of the players that received combine invites, it would have been nice to get full workouts for those who didn’t, especially Dean.