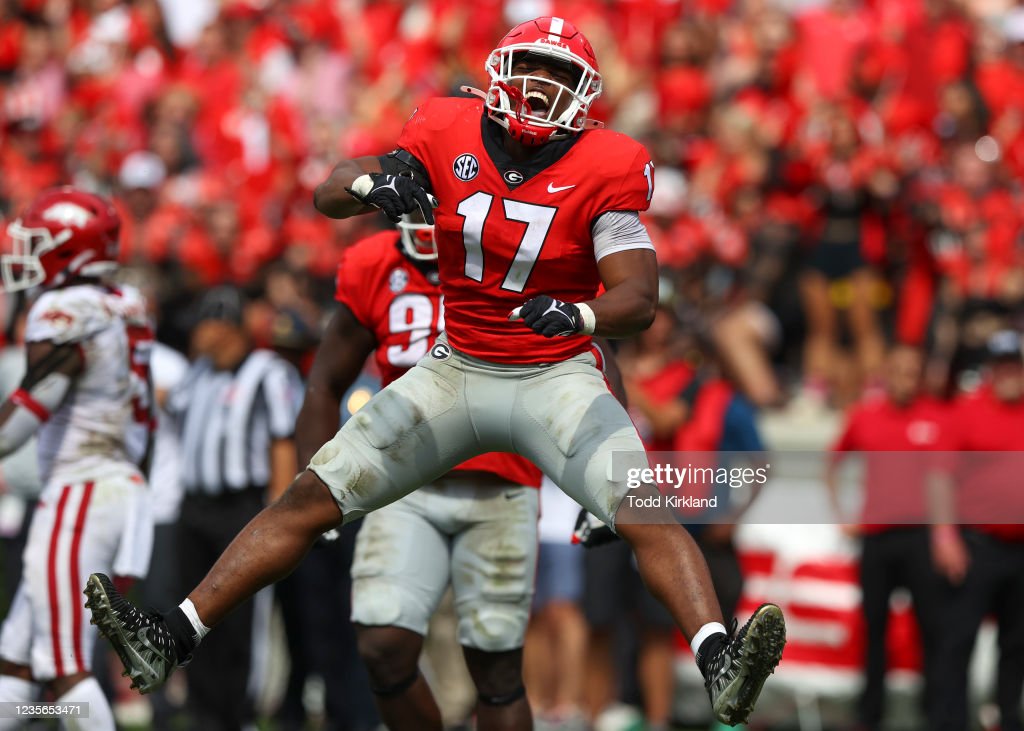 From now until the 2022 NFL Draft takes place, we hope to scout and create profiles for as many prospects as possible, examining their strengths, weaknesses, and what they can bring to an NFL franchise. These players could be potential top 10 picks, all the way down to Day 3 selections and priority undrafted free agents. Today, I’ll be profiling the 2021 Dick Butkus Award Winner out of Georgia, Nakobe Dean.

— Elite interior blitzer, times snap well and bursts through line
— Can shut down running backs in the pass game
— Easily sinks into zones and shows good anticipation and understanding of route concepts
— Can beat blocks with speed
— Brings energy to the game, can see him barking at line to move into right spots and shifts
— Explosive burst, can play sideline to sideline with ease
— Was heart and soul of one of the top defenses in the nation at Georgia
— High character guy off the field, lots of community service

— Can get swallowed at 2nd level by offensive lineman
— Not much block shedding on tape, length doesn’t help with that
— Can burst before finished reading, taking himself out of position
— Needs to get better at processing plays, can tell he guesses at times
— Unless he’s on an interior blitz, don’t see him shooting gaps in the run, plays laterally too much against the run
— Needs to get stronger

Georgia Bulldog linebacker, Nakobe Dean, won the 2021 Dick Butkus award for college football’s best linebacker and was able to top off his prestigious career in Athens with a National Championship win against the Alabama Crimson Tide.

Dean played with some big dogs (pun intended) on one of the nation’s top defenses and still stuck out as one of the best players on the team.

Let’s dive into his tape and see what makes Dean the player he is.

His best trait is his ability to blitz up the middle. There are countless clips on his film of him using his burst and speed to beat interior linemen for pressures and sacks. Here, against Tennessee, you see how quickly he can get to the quarterback. Dean is lined up about four yards off the ball, times the snap perfectly, and is able to run through the attempted block by the running back for a strip-sack on the quarterback. Snap to QB hit is roughly 2.3 seconds total. Going to be tough for any quarterback to get it out that fast.

When Dean is used in this way to blitz the quarterback, it’s almost a cheat code. It’s rare you see an interior lineman quick enough to keep up with him. He doesn’t necessarily win with power or moves, they just cannot hit him square enough to anchor so he runs right by them. His low center of gravity also makes it easy for him to lower his level turn the corner similar to an edge rusher.

We’ll take a look at one last of his speed coming up the middle. Here it’s a double a gap blitz with a twist. Dean ends up being the second one through and with a combination of his speed and possibly his size (not being seen) he’s able to knife between the guard and the center. His pressure forces the ball out of the quarterback’s hand in a hurry and creates the turnover.

Dean’s ability to time the snap and split the line on predetermined blitzes also worked in the run game. Here, against Arkansas, he’s able to again use his speed to penetrate the line before the guard can get off his combo block and hit the ball carrier behind the line of scrimmage.

The main gripes with Dean is his ability in the run game when he’s not on a predetermined blitz. His processing is rough and his poor ability in the run game was often swept under the rug thanks to the rest of this Georgia defense picking up the slack. You’d think when a linebacker is behind a defense line with three to four potential draft picks that he’d be kept clean a ton and be able to shoot the gaps for run stops. That feeling is doubled when you see his ability to use his speed on blitzes to do just that. It’s what I expected to find on his tape and simply wasn’t able to in the five games that I watched. Dean often finds himself playing laterally instead of downhill against the run. Let’s take a look at what I mean.

Below, Dean flows with the running back going across the formation, so much so that he almost overruns the play. If he was more disciplined with his read steps he could have shot the gap through the cutback lane and had a nice stop. Instead, he contacts the back three yards downfield and isn’t able to bring him down.

Here’s another rep you can watch Dean shuffle left and hesitate like he wants to shoot a gap, but decides against it. Then gets beaten to the outside and ends up tripping over his own teammate’s feet.

The other worrisome thing you see about Dean’s ability against the run is getting eaten up at the second level. He’s again a little slow to the spot and then easily gets controlled by the guard on the combo block. Dean’s lack of length allows bigger linemen to get hands-on too often and the fight is basically over for him once they do.

This next rep shows basically the same thing as the last except this time Dean doesn’t set a base when meeting the lineman and he gets shoved six yards back leaving a huge gap in the Georgia defense.

It’s not just larger guys that can overpower Dean, here against Florida, is blocked out of the hole by a running back.

Right now, the run defense is where Dean will have to improve the most at the next level getting better at play recognition, using his speed to diagnose and shoot gaps, and stacking and shedding. It’s nowhere near where it needs to be right now to be an every-down linebacker. Not saying it’s not something he can improve on, but I’d be worried sticking him out there day one on an NFL defense.

Where Dean lacks in run defense, he does make up for it in the passing game. He has no problem sticking with running backs out of the backfield. His size may limit him against bigger tight ends, but it won’t be because he can’t stick them. It’ll be because they might play through him.

Let’s take a look at some coverage reps.

Below, Dean is covering a mini-dig out of the wing position from #6 for Florida. He originally looks like he’s taking away a “stick” concept from the #3 receiver which is normally an option route for a hitch or quick out, with the way he sets his hips. Instead, the wing breaks inside, but with Dean’s quick burst he’s able to jump inside and still take away the route. I think the quarterback is actually throwing to the outside sit route and Dean happens to just be there, but still a great play by him either way with his coverage of the dig. He’s almost able to come up with a pick.

While it’s not the “stick” concept, let’s take a look at Dean covering an out from the #3 receiver. You’re not going to find a linebacker sink and drive on an out route smoother than this. This is a perfect rep from Dean, not only with his footwork but by playing through the receiver’s hands at the catch point.

This is probably Dean’s biggest play of his entire career at Georgia. He’s covering a running back split out wide. The RB runs a simple curl 5-yard curl and Dean’s able to click and close for the pick-six. His burst here looks like one of the a true cornerback, great play.

On this rep, Dean is breaking on a flat route that turns into a wheel for the running back. He may get away with a slight hold, but he’s able to successfully sink and flip his hips, sticking with the back and making sure the pass falls incomplete. Even if the pass was on a target, it would be tough to fit a pass into this coverage.

When Dean gets to show off his true sideline to sideline speed it’s impressive. Here, against Alabama in the National Championship, he’s able to sink out with the tight end in motion, and shut down this wide receiver screen with a nice pop at the end.

Perhaps an even better show of his speed is on the last clip we’ll be looking at. Dean is lined up on the edge and begins to sink into coverage. The play is a form of a speed option where the running back receives a toss. Dean is able to sprint the entire way across the formation and make the tackle on the opposite numbers. A great show of his speed and hustle.

Nakobe Dean has all the tools to be a great linebacker in the NFL. Some of his tools need to be grown into at the next level. It’s hard not to see his size and production and not be reminiscent of another linebacker who is in the black and gold named Devin Bush. The tools are there, but the mental processing in plays against the run leaves something to be desired. Dean is someone that I think can succeed if he is allowed to take it slow in his first two years as he matures in the mental part of his game and is deployed in sub-packages on passing downs. If he can improve in that part of his game, the sky is the limit. In terms of the Steelers, I would shy away from him as I think he would be best suited in an even front system where he is able to stay clean more often and utilize his strengths that way.