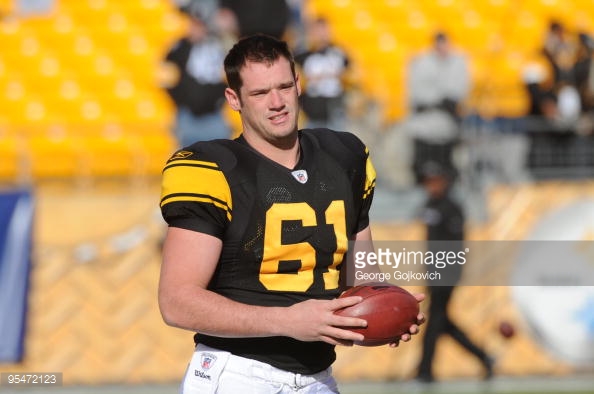 Sadly, this will be our last article in this series for the offseason. I don’t think anyone is going to care about this when camp begins, but we’ll definitely bring it back next year. Remind me, Steelers’ nation.

We’ll conclude with a position we’ve yet to recover. Long snapper. Cue the choir singing. Greg Warren has been the guy for ten years but knee injuries have forced the team to find replacements throughout his career.

One of those is today’s selection, Jared Retkofsky.

At the start of the 2008 season, a free agent, he got a job as a furniture mover. That quickly changed when Greg Warren tore his ACL, leading to the infamous James Harrison long-snapping experiment against the New York Giants, and the Steelers called on Retkofsky to be their guy. He finished out the season that culminated in a Super Bowl ring.

The team brought him back late in 2009 when Warren again got hurt in bizarre fashion, the extra point in the Steelers game-ending win over the Green Bay Packers, to finish out the season. Also of note: Joey Galloway was signed the same day as him. Bonus “blast from the past” for ya.

Jared Retkofsky, your blast from the past.

A list of the players we’ve highlighted in the series. Cherish them.