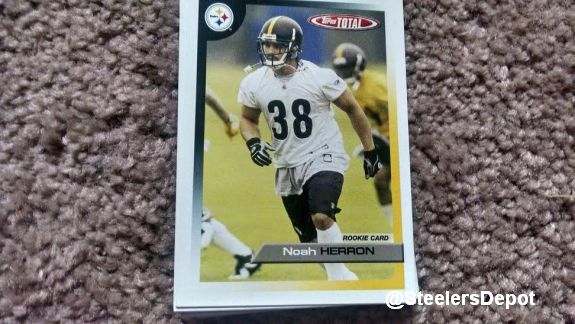 We’re going to stick with the offensive side on this Monday with running back Noah Herron.

One of the team’s seventh round picks. And I mean way late seventh rounders. 244th overall, 7th round. The point where you’ve probably turned your TV off or are in maximum pizza coma seventh round. That’s when Herron’s name popped up.

I always poke around on the Interwebz to see if I can find an interesting story with these players. And I’ll be honest here. I was nearly positive Herron never played a down with the Steelers. But he did! In Week One of his rookie season. Willie Parker, in his first start, stole headlines with 161 yards rushing, but Herron squeaked in one the box score late. In a 34-7 blowout win of the Tennessee Titans, Herron was inserted on the team’s final series, carrying the ball three times for two yards.

He actually went on to have a successful, and I use that term relative to the series, career. The Green Bay Packers would scoop him off the practice squad in 2005, and see him rush for 121 yards and two touchdowns. They brought him back in 2006 where he found the end zone three times, two of them through the air. A 2007 knee injury ended his career.

One other notable post-football incident. In 2008, a burglar broke into his home only to be met by Herron…and his bed post, which the ex-NFL’er unscrewed from his bed. It sent the intruder to the hospital.