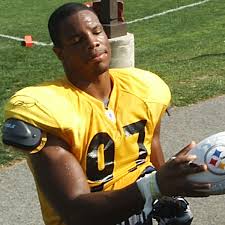 We’re back to the defensive side of the football today. Today’s man is linebacker Arnold Harrison. He played 28 games with the Steelers, recording 21 total tackles. Because of injuries to James Harrison and Joey Porter, Harrison actually started two games back in 2006. Those were dark times, indeed.

Harrison would end his football career with the Cleveland Browns, participating in four games after the Steelers waived him mid-season.

Arnold Harrison, your blast from the past.