Final one of the series. Pittsburgh’s last game of the season, a 20-7 victory against the Cleveland Browns.

Although the door may have jarred open to Brett Keisel’s return to Pittsburgh, at the time, it was widely believed that this was “Da Beard’s” final game with the Steelers. In a down season hampered by injuries but he finishes the year on a positive note.

The Browns are in the midst of a ten play drive that’s taken them 55 yards. It’s the first quarter so obviously still a close game, Pittsburgh leading 7-0. With the possibility of the Steelers’ making the playoffs greatly increased, this game can no longer be considered “meaningless”, the prevailing thought three weeks ago.

Keisel bull rushes left guard Garrett Gilkey, the veteran making quick work of the rookie. He reaches Jason Campbell and punches the ball out from behind, sending it wobbling downfield. Chris Carter dives on it and the Browns’ drive, as it is their luck, stalls. 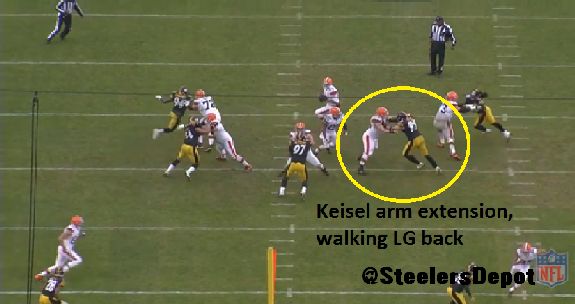 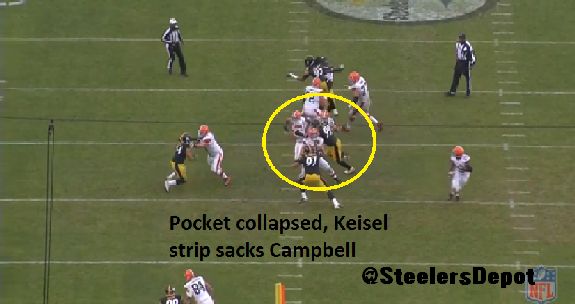 If you take nothing else away from this, realize Brett Keisel made Chris Carter useful. That’s a borderline miracle.

The third straight week Le’Veon Bell has been highlighted in this series, appropriate considering the strong final quarter to the season he, and by extension the running game, had.

It’s one of those plays where a running back’s true ability can be measured. One where the offensive line breaks down, there’s immediate pressure in the backfield, and the back has to clean up the mess. The playcall thrown out the window, it’s sandlot football.

Marcus Gilbert appears to screw up his zone blocking assignment, thinking David DeCastro is going to help double-team with him. Consequently, Billy Winn rushes into the backfield untouched almost immediately.

He isn’t fazed by the monkey wrench in the play, spinning out of Winn’s grasp, bouncing the play to the outside, and backing his way into the end zone.

The Steelers push their lead to 14, putting them in control for the rest of the contest. Bell again runs well with 90 yards on 20 carries, giving Steelers’ fans a lot to be excited about heading into his second season.

This one might not make the “best of the best” in a highlight reel but it’s important in two aspects.

1. It again shows the stellar play of Cameron Heyward

2. Another Cleveland drive is stalled, and after this failed conversion, it feels all but certain the Steelers have won the game

The Browns’ first drive of the second half is again promising, marching from their own 29 to the Steelers’ 33 in eight plays. With their struggling offense facing a 4th and 3, Rob Chudzinski decides to push the envelope and go for it.

Heyward draws the attention of two lineman on this play. First, right guard Oneil Cousins who Heyward easily jolts backwards off the ball.  It’s difficult to illustrate in stills, why I didn’t include one, but definitely check it out in the GIF. Yes, Cousins is a backup thrust into a starting role, but it just shows how strong and dominate Heyward is.

All-Pro center Alex Mack makes the next attempt. As Campbell steps up into the pocket, Heyward sheds the center and applies pressure on the quarterback just as the ball is released. The pass is thrown low to the receiver, who is open enough to complete the pass, and falls incomplete.

Another drive where the Browns walk away without points. The Steelers’ get a field goal after taking over on downs, increasing their lead to three possessions while chewing up another five minutes of the third quarter.

It puts Cleveland in a “pass first” mode, all on the shoulders of Jason Campbell, who barely completes half of his passes the rest of the afternoon.