The Steelers’ avenge an early season loss against the Cincinnati Bengals, defeating them 30-20 in Week 15.

This isn’t just about the fact Le’Veon Bell had a reception but when it the reception occurred. It comes on a critical down, 4th and four on the Bengals’ 31.

It’s not a play where Bell is the primary receiver. On the snap, Ben Roethlisberger eyeballs Emmanuel Sanders over the middle, but with the receiver bracketed, is forced to move through his progressions.

Bell checks/releases (look for a blitz, if nothing there, release into a route) running a quick out towards the right sideline. As Roethlisberger rolls to his right, he finds Bell – the only receiver in the area – and completes the pass to convert the first down. The rookie back gets additional YAC before running out of bounds at the Bengals’ 15.

Obviously, this keeps the Steelers’ drive alive. Antonio Brown scores two plays later and the Steelers storm out to a 14-0 lead.

Not much has been made of Bell in this series, though I promise he will still be highlighted at least once more, but his play became a stabilizing force for a backfield in desperate need of one. The numbers weren’t great but considering the circumstances were even worse, it was an encouraging step.

As Dave Bryan and I mentioned about on The Terrible Podcast yesterday, Bell’s 45 receptions was one of the more overlooked figures of any Steeler in 2013. That mark was the most for a back since John L. Williams caught 51 in 1994. Prorate Bell’s numbers over a 16 game year and his receptions increase to 55.

Checking the history of the team, no back has had more catches in a single season than Williams’ 51. Meaning, there’s an excellent chance Bell sets the team single-season record for receptions by a running back in 2014.

Plays like this are what will make it difficult for the Steelers to take Antonio Brown off punt returns in 2014. Even though that outcome seems inevitable.

Of course, this play will chiefly be remember for the jaw-breaking – literally – hit by Terence Garvin on Bengals’ punter Kevin Huber.

As far as returns go, this one didn’t exactly register high on the difficulty meter. The blocking coupled with the Bengals own missteps created a wide open lane straight ahead for AB. Aided by blocks from Garvin and Shamarko Thomas (whose block may have actually been more important to springing AB) and Brown finds the end zone 67 yards later.

It’s a death blow to the Bengals, who fall into a 21-0 hole at the end of the first. Consequently, their eventual fourth quarter comeback is not enough.

As good as receiver Brown was in 2013, don’t forget he finished fourth in the league in punt return average with a 12.8 mark.

At the very least, Dri Archer has his work cut out for him.

This one didn’t ultimately affect the Steelers’ victory but it sums up the offensive line woes suffered in 2013. There were talent issues, looking at you Mike Adams, but there were just as many mentally (still looking at you, Mike Adams).

With the group in flux throughout the year, it was incredibly difficult to establish cohesion. Repeatedly, it was a group that struggled to pick up even relative simple Tackle/End (T/E) stunts. So much so it became a running theme in my post-game breakdowns.

Rears its ugly head early in the fourth quarter.

Steelers keep seven in to block versus a six man rush from the Bengals. It’s an aggressive look that adds to the difficulty of picking it up efficiently – the linebackers “sugar” the “A” gaps – but at its core, it’s a simple twist by the LDT and LE. 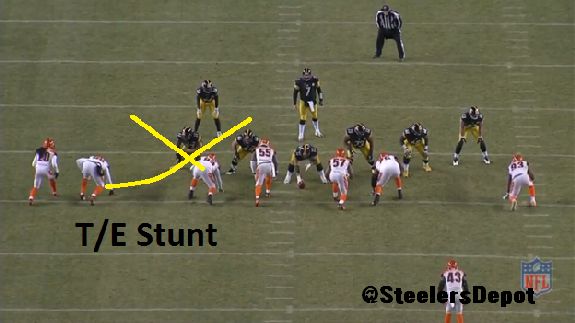 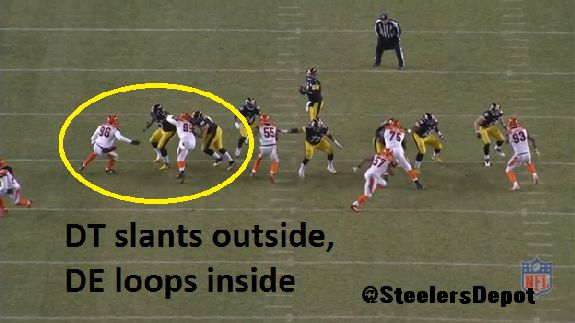 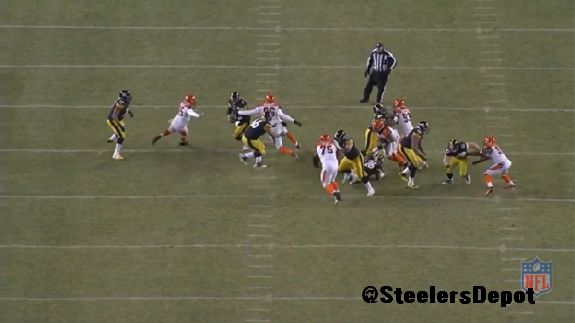 Marcus Gilbert and David DeCastro are not able to pass it off correctly causing both defenders to meet at the quarterback. Roethlisberger is dropped to the turf, the Steelers forced to punt, and the Bengals find the end zone on their ensuing possession.

Better communication and understanding along the offensive line should be a focus point for Mike Munchak in 2014.