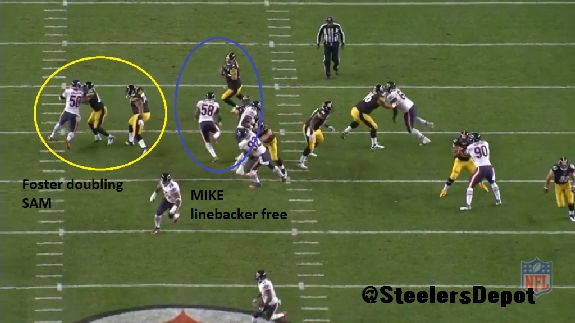 Continuing in the series, the Week Three 40-23 loss against the Chicago Bears. But I promise one of the following plays is a positive one.

In the recent study conducted to examine how the Steelers’ performed on their first drive of the game, I noted their bad habit of turning the ball over. Week Three was one of those four instances. And it isn’t just that the turnover occurred – it was the how that showed the larger picture.

2nd and 4 on the Steelers’ own 37. Similar to the playcall on the David Paulson fumble we broke down last time. Sell the run by showing a heavy look, pulling the guard (this time left guard Ramon Foster) off playaction.

Foster misses picking up MIKE linebacker D.J. Williams, and winds up doubling the SAM with running back Felix Jones. Williams has a clear path to Ben Roethlisberger, who can’t react in time after turning back to the field.

Roethlisberger is stripped and the Bears’ James Anderson recovers. Chicago takes over on the Steelers’ 17 and five plays later, Matt Forte punches it into the end zone. Mid-way through the first quarter, the Bears have a 10-nil lead.

This play exemplifies the chaos seen along the offensive line, especially over the first half of the season. It was a group in turmoil after the loss of Maurkice Pouncey, adjusting to new offensive line coach Jack Bicknell Jr., and general “below the line” play. Mental mistakes are rampant and truly a bigger issue than anything physical.

One of the hallmarks of a Steelers’ defense is the ability to eliminate “splash” plays. Long gains that flip fields and swing momentum. Chiefly, against the run. It’s a real source of pride for that group.

The individual that should get a lot of credit for that is Ryan Clark. A kamikaze in uniform, he was fearless against the run, sacrificing his body for the sake of the tackle. At his best, he was truly one of the most underrated players in the game.

However, it’s only fair to pin a lot of the blame on him for the Steelers’ woes in that department throughout 2013. The shell starts to crack in Week 3.

Following the first Forte touchdown, the Steelers’ go three and out and give the ball right back. On Chicago’s first play of the series, Forte rips off a 55 yard run before Troy Polamalu gets just enough of a push to cause the back to step out of bounds at the Steelers’ seven.

Breaking down the play, Pittsburgh attempts to cross blitz inside linebackers Lawrence Timmons and Vince Williams. But the Bears pick it up well and right tackle Jordan Mills seals Williams from filling the lane. Forte reaches the second level untouched. 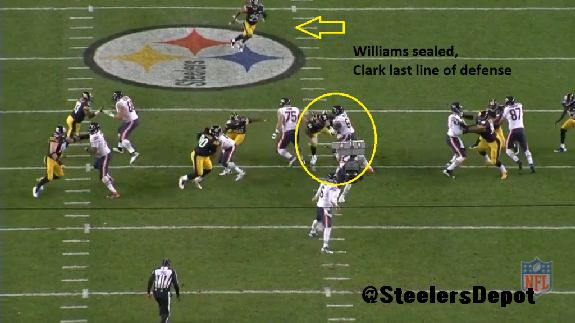 This is where Clark was so apt at cleaning up mistakes. Make the tackle and prevent an 8-10 yard gain from turning into a 50-60 one.

He fails here, the first of many. Forte gets tripped up but stays on his feet and takes off down the right sideline. William Gay seems to try and punch the ball out but is unable to do so.

Four tries later and the Bears finally cross the goalline to take a commanding 17-0 lead.

That hallmark takes a vacation in 2013. Clark takes a permanent one to Washington. We can only hope a guy like Mike Mitchell remedies the problem.

Kept my promise. Even after three games, it’s clear this will go down as one of the top individual plays of the season.

Let’s set the stage. The Steelers’ are down 27-13 with the third quarter winding down. Pittsburgh forces a punt and the offense starts going to work. Heath Miller for 21. Jerricho Cotchery for 26. And Brown caps it off with an amazing grab in the back of the end zone.

Running a post corner, he gains a step on Charles Tillman. For a moment, Big Ben’s throw seems to be too far out in front. But in a move that would make Inspector Gadget envious, Brown extends his right arm, suspending the ball in the air for the moment. Seamlessly, he brings in his left hand, and clasps the football down near his knees. Celebrates with a funky salsa dance. 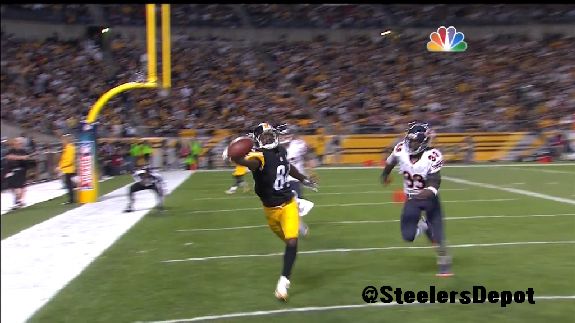 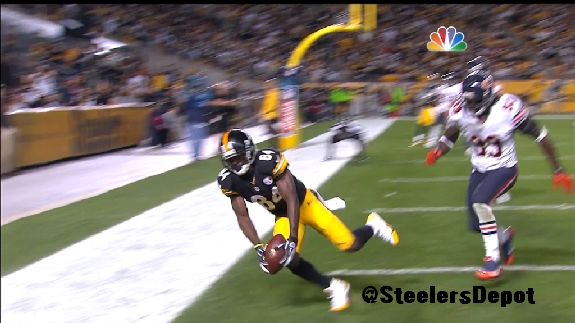 It ultimately isn’t enough to allow the Steelers to comeback, but don’t blame AB. He would finish the day with nine catches for 196 yards – the latter still a career high –  and two scores.

His dominant performance tells fans that life without Mike Wallace will be ok. Antonio Brown is here to be the #1 receiver. He would go on to set a franchise record in yards. Week Three was the start of something special.