Week 14 was the final loss Steelers’ fans had to endure in 2013. But one of the toughest, a 34-28 heart-breaker to the Miami Dolphins.

In a wild and crazy game that isn’t decided until the final snap, it’s only appropriate that all three plays come within the last four minutes of the final quarter.

First, a little background to drive this point home in the most depressing way imaginable. In 2013, Daniel Thomas ran for a grand total of 406 yards, averaging an ugly 3.7 YPC. Two weeks prior, he suffered an ankle injury that left many to conclude his uninspiring season was over.

So consider it a surprise when Thomas suited up for the Week 14 contest at Heinz Field.

And a shock when he busted out for 106 yards on 6.6 yards per carry. If you’re counting, that 106 mark accounted for 26% of his rushing yards on the year.

The coup de grace comes with 3:59 remaining in the game. Pittsburgh, desperate for a win, cling to a 28-24 lead.

The Steelers, as they so often did in 2013, are in dime against a pistol formation out of 11 personnel. Pittsburgh becomes defenseless against what essentially mimics as an old school “Student Body Left” with the center and left guard pulling. They make quick work of Will Allen and Troy Polamalu. 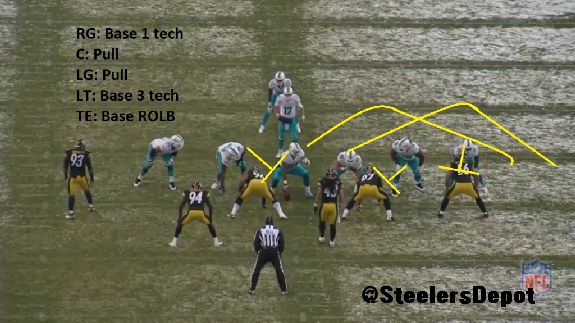 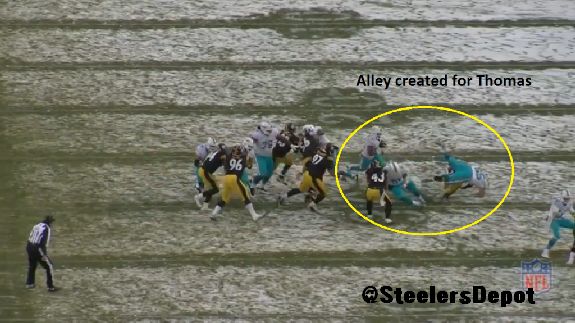 Thomas runs into the second and third level virtually untouched, not meeting his first true resistance until Ryan Clark nearly 20 yards into his run. Thomas cuts back to the right, eluding Clark and causing Cortez Allen to slip and fall on the snowy field in the process.

William Gay saves the likely touchdown, chasing Thomas down and latching on from behind, bringing the burly back down at the Pittsburgh 16. It’s a 55 yard gain. To put that in perspective, 39 more yards than the second-longest rush Thomas had in 2013.

It leads to a Dolphins’ touchdown and in another depression-induced segue, our second play of this article.

Part of the reason why Thomas’ long run stings so much is due to his poor season. Another in a long list  of names who had career games against the Steelers. But make no mistake, Charles Clay is not one of those players. He quietly finished the year with 69 catches and six scores, making him one of the most underrated players in national circles.

But his 4th quarter touchdown, his second of the afternoon, against the Steelers is one that should have never happened. While it faces stiff competition, it’s one of the most disheartening plays of the season.

Second and six for Miami, again, still down by four. Ryan Tannehill tosses a quick curl to Clay who catches it without issue against the off-coverage Cortez Allen. Given Dick LeBeau’s philosophy, keep everything in front and tackle the catch, it’s nothing new.

Except the “tackle” never happens. Allen misses first, followed by Troy Polamalu making an attempt that is too high. Allen fails for the second time and Clay shakes him off as he waltzes into the end zone.

It gives Miami a 31-28 lead with little time left.

Ugly missed tackles like the ones seen in this play are so rare for a Steelers’ defense – well-coached and technically sound. They severely lacked there last season and it killed the defense.

It should have been so memorable. Instead, it’s one we try to forget.

Little more needs to be written. Down six, ball at their own 20, Steelers with three seconds to work with, just getting lined up in time before the clock strikes zero.

It would take a miracle. Or a lateral.

On a play where six Steelers touched the ball – including Marcus Gilbert – Antonio Brown races down the left sideline and into the end zone. For a brief moment, it appears a miracle has just been pulled off.  But the official correctly rules that Brown steps out of bounds at the Dolphins’ 12.

It sums up the Steelers’ season. So close, so far away.

And if you’re anything like me, you jumped around in state of ecstasy for a full minute before someone told you Brown stepped out. Not even a woman can break a man’s heart like football does.