The Steelers’ winning streak continues in Week 12 with a 27-11 victory over the Cleveland Browns.

2013 won’t be a memorable year for the Steelers’ defense as a unit but Troy Polamalu quietly had a successful season in less than ideal circumstances. He plays every single snap on defense, one of just 12 players in the NFL to do so. While the interception numbers weren’t gaudy, he set a personal best with five forced fumbles. One of which comes in Week 12.

1:51 remaining in the first half. The Steelers lead 10-3 but the Browns have possession near midfield. On the surface, the box score looks impressive: Polamalu forcing and recovering a fumble of Chris Ogbonnya.

But checking the tape, it’s so much more incredible than that, and really encapsulates the future Hall of Fame player Polamalu is.

He begins the play lined up in his hybrid linebacker role, a position he occupied far more often than anyone would’ve liked. But he had the talent and IQ to do so, a transition few players could pull off.

On the snap, he attempts to run blitz through the strongside “A” gap against a Cleveland run to the weakside “A.” Polamalu is stonewalled by Alex Mack. For most players, that would be the extent of the play. The back would run past and someone else would clean up the mess.

Not Troy. He spins around and starts retreating backwards, not even finding Ogbonnya until they’re nearly face-to-face. He spins around, gets his hips square, strips him, and recovers the fumble in mid-air.

The Browns obviously lose the chance to add points before the half and the Steelers tack on a 32 yard field goal before intermission, pushing their lead to two possessions, 13-3.

While the Steelers did struggle to intercept opposing quarterbacks, they did force 14 fumbles, a mark good enough for sixth in the league. They get their second fumble recovery against Cleveland in the third quarter.

One of Dick LeBeau’s classic zone blitzes. Stack Jason Worilds and Jarvis Jones to the same side, dropping Jones into a hook zone. 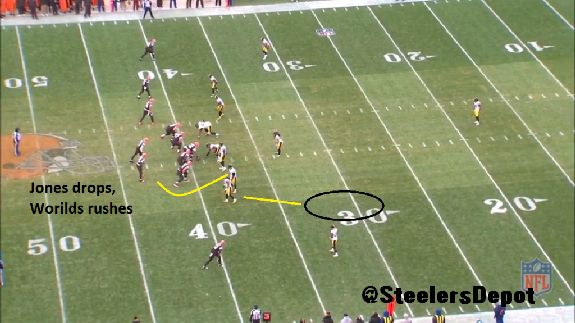 Slant Cameron Heyward down a gap into the left guard while occupying left tackle Joe Thomas. Cat blitz William Gay and Will Allen, forcing the running back to only be able to block one as he slides over. The back chooses Allen, leaving Gay to blitz freely. 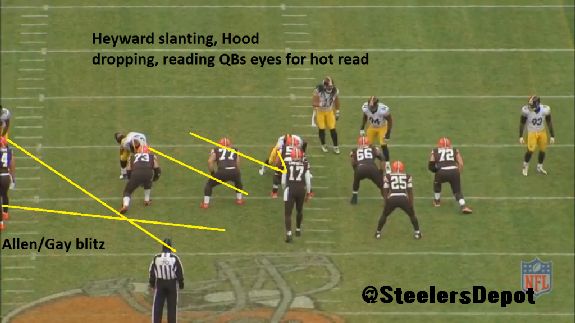 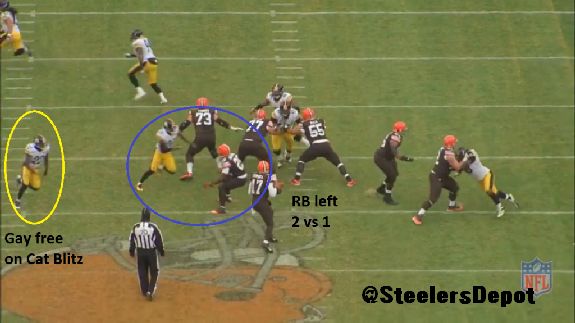 Gay blindsides Jason Campbell, knocking the ball out. Allen deftly picks the ball up and nearly scores before being tackled at the four.

By the game’s close, the Steelers would force four Cleveland turnovers, the most they had against any opponent on the year.

The route concept is simple but effective. Twin wide receiver set and a slant/flat combination, one of the most common route concepts in the red zone. Antonio Brown runs into the flats with Sanders on the slant. Brown’s route rubs corner Buster Skrine, creating enough separation to open up Sanders. Pitch, catch, six. 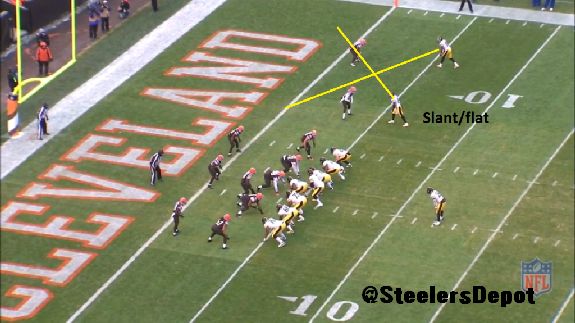 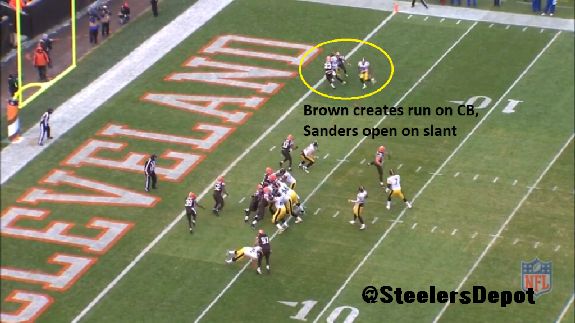 By this point, Pittsburgh leads 20-3 and are in complete control of the game. The Browns are forced to the air – now with Brandon Weeden filling in for an injured Campbell – and only run the ball four more times the rest of the afternoon. Weeden predictably sputters, completing less than half his passes and throwing a pick six to Gay.