The light at the end of the tunnel has finally been reached. Game one of the team’s 6-2 stretch to close out the season, a 23-3 win over the Buffalo Bills.So good news ahead. Mostly.

Fifteen years from now, we’re going to try and tell the next generation of Steelers’ fans that Jerricho Cotchery once led the team in touchdowns and they probably won’t be quite sure if we’re telling the truth.

It really was a surprising year – and that’s meant in the best way – for the veteran wide receiver. What he was able to provide as a #3 WR proved to be valuable in 2013. Far from the biggest or fastest, Cotchery’s intelligence and experience were his best attributes. He exhibited that on his touchdown catch against the Bills.

First and Goal at the five with two minutes before the half. Steelers’ are in a Heavy Set with Cotchery as the lone receiver, not terribly uncommon since he’s the team’s best run blocking WR.

Cotchery is slow off the line, faking a run block, lulling second year corner Stephon Gilmore into a false sense of security. Gilmore peeks into the backfield, thinking the play must have been a called run. 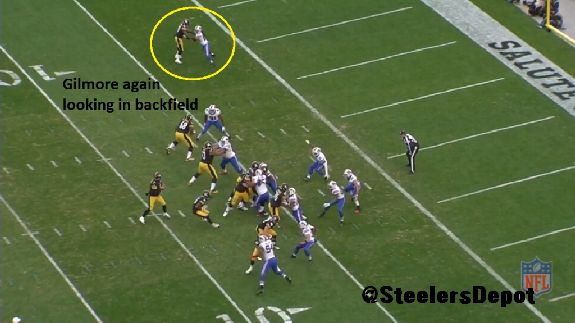 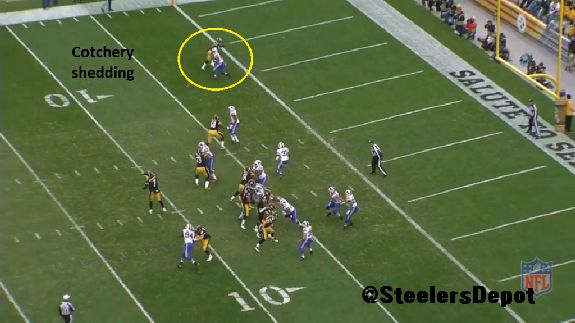 As soon as Gilmore looks, Cotchery disengages, explodes past, and runs to the corner of the end zone. Gilmore is helpless and left to trail the play. Cotchery locates the ball over his shoulder, stretches his arms out to make the grab, and gets both feet inbounds. Touchdown.

This isn’t a play called by chance, either. Ben Roethlisberger would comment after the game the idea stemmed from something “J-Co” told him the series before.

“That’s what we talk about what Jerricho brings. On the previous series, Jerricho said the DB was set up for that play, and you trust him that he is going to give you good information, and he did.”

That play Roethlisberger is referring to comes on 2nd and Goal from the Bills’ seven with 10:33 left in the second. It was just a simple stalk block by Cotchery, the run not even to his side. But the savvy wide receiver made a mental note of it, and sure enough, looking back at the play, you can see Gilmore looking in the backfield. Just like on the touchdown. 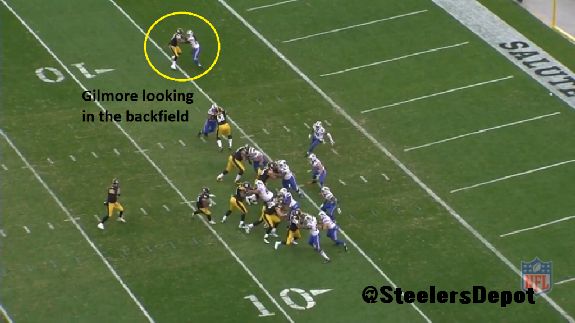 So let’s recap what happened. Cotchery processes a small piece of information on a play where a lot of wide receivers – the divas that they normally are – take off. He relays it to his quarterback, who has enough trust in his wide receiver to test it on the next series. Cotchery sells it perfectly and then makes the play.

He’s going to be a player the team will sorely miss in 2014.

This is one of those plays that lies outside the “mostly” tag. It sums up Jarvis Jones’ season as an edge rusher. Though we’ll stay true to the series’ name and focus on just one play, the same thing occurs two more times on the same drive. A big influence on why I included it on here.

One of the biggest issues for Jones coming off the edge was him getting pushed “up the arc,” upfield well past the quarterback. He lacked the bend and counters to do anything more than dip his shoulder and try and get skinny around the edge. When it failed, as it often did, he would take himself out of the play.

Again, this happened on three consecutive plays during the Bills’ final drive of the first half, but I’ll focus on the final one considering it’s the most egregious of the trio.

Third and six with 56 ticks left before halftime. Jones is working against Cordy Glenn, a good left tackle but by no means one of the elite blindside protectors.

Jones knocks away Glenn’s hands and remains disengaged before trying to dip his shoulder to get past. But Glenn calmly maintains his base, moves laterally, and seals Jones. He then drives into Jones shoulder to push him upfield and out of the play. 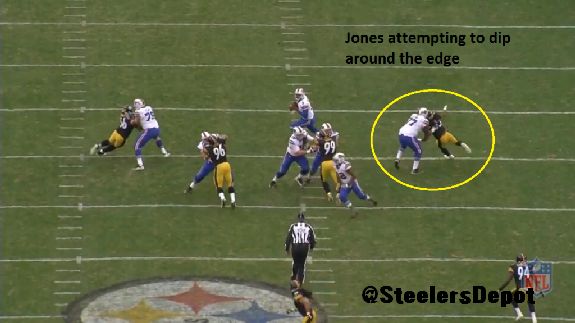 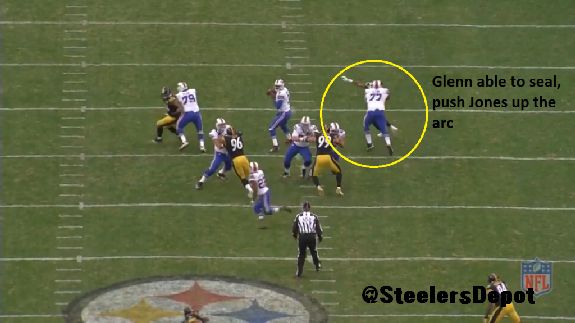 It looks worse from the aerial view and you can truly see how far the rookie is from getting to the quarterback. 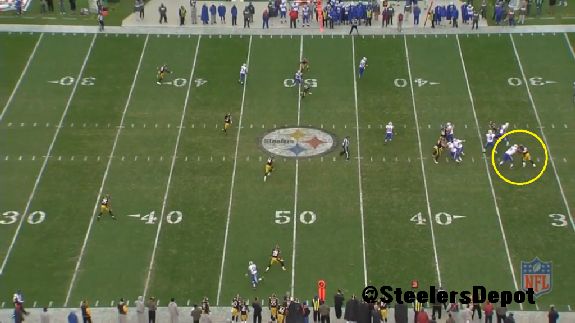 Just to touch on it, here’s how far Glenn pushed Jones up the arc on the previous two plays. 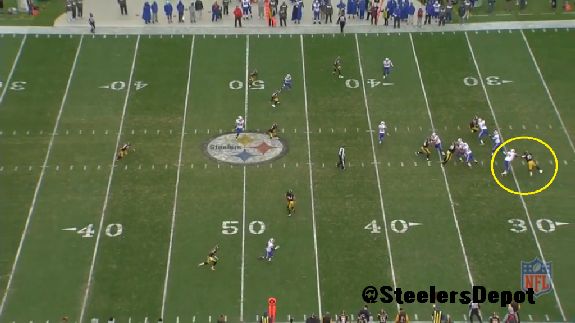 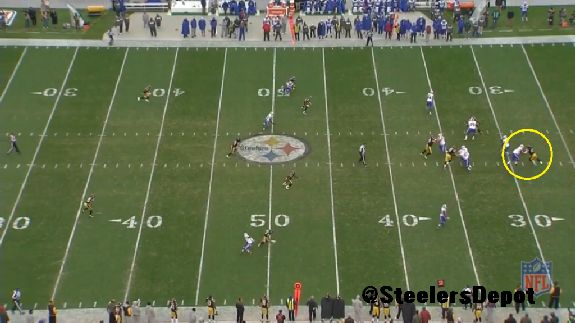 If you didn’t know any better, you’d think these were from one snap.

I’ve been a harsh critic of Jones but with good reason. I severely question his hip/ankle flexibility and strength. It’s not impossible but he has a lot to work on. Coupled with yesterday’s study on second year sack numbers, I just can’t see a huge leap statistically in sacks come 2014. Not until the tape makes me consider otherwise.

I don’t try and hide my man crush on Cameron Heyward. A player Steelers’ fans got to witness growing up in a hurry throughout 2013, there’s every reason to believe he’ll make a name for himself on a national level once the book is closed ’14.

After recording a combined 2.5 sacks in his first two seasons, he doubled that amount in 2013. And his sack of EJ Manuel dashes any hopes of a Buffalo comeback.

Third and 17 with about seven minutes remaining on the Bills’ 33. Hope is faint but if Buffalo gives the ball away here, that slim chance evaporates. The Steelers, keeping everything in front, play a two deep shell and rush only four.

Heyward runs through our old pal Kraig Urbik, despite the guard’s best efforts to hold him. He pounces on Manuel, not giving the elusive quarterback an opportunity to escape, and drives him into the ground. The Bills are forced to punt.

Brett Keisel gives him a hug, as if to say “This is your defensive line now.”