Tackling Week Two today, a 20-10 defeat at the hands of the Cincinnati Bengals.

Oh David Paulson. How Steelers’ fans, this one play included, love to loathe you. We do because of moments like this against the Bengals.

2nd and 8 late in the first quarter. The Steelers’ first offensive splash play. It’s a concept that works like it’s drawn up. Heavy, run look, max protect keeping eight in to block, with just a two man route downfield. Pacman Jones, playing man coverage (It’s man-free, Cover 1), freezes as his eyes are locked in the backfield. The Steelers’ even throw in the wrinkle of pulling David DeCastro to really sell the run action.

Paulson streaks towards the left sideline on a deep crosser. He reels it in at the Bengals’ 30 and bumbles to inside the 20 before getting tracked down. As Paulson is high-lowed by Jones and the safety, the corner punches the ball out of his hands and makes the recovery. A Bengals challenge overturns the initial ruling of down by contact.

Five plays later, Giovani Bernard cashes in on a seven yard run, putting the Bengals in the lead, 7-3.

The game didn’t get any easier for Paulson, who is later lit up by Reggie Nelson while trying to block on a run to the right. One of the ugliest individual plays of any Steeler in 2013.

Heath Miller returns the following week and mercifully so, Paulson gives us the starting gig.

It was an early turnover and 7-3 is clearly not an insurmountable lead. But it gives the Bengals momentum and confidence in prime time football.

It’s the second touchdown for the rookie running back from Chapel Hill. But it isn’t just the fact he scored, it’s how he scored. A harmless check-down from quarterback Andy Dalton, the ball traveling no more than two yards past the line of scrimmage.

Bernard has some space underneath but at first glance, with numerous defenders in front of the back, the Steelers’ should be able to stop him after a medium size gain. 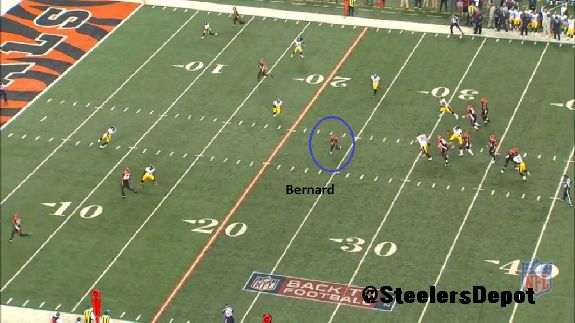 But as fate would have it, Kion Wilson – filling in for the injured Larry Foote – slips, allowing Bernard to scoot to the edge and walk into the end zone. Bengals take a 17-10 advantage, putting themselves in the driver’s seat for the remainder of the game.

I know, I know, eight yards? So what? It’s all about circumstance.

This eight yard run came with the Bengals holding onto a 20-10 lead with four minutes to go in the game. 3rd and 8 on their own 18. The Steelers still have all three of their timeouts plus the two minute warning. Chances are low for a comeback but are effectively eliminated if the Bengals’ convert.

Cincinnati doesn’t hide what they want to do. Heavy set with just one wide receiver and full-time defensive tackle, part-time fullback Domata Peko in the backfield. 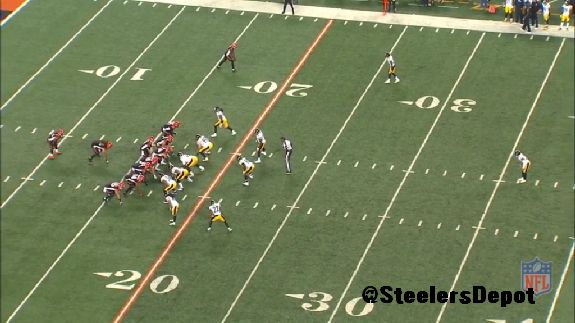 Handoff goes to the Law Firm, who keep in mind winds up averaging a disgustingly low 3.4 yards per carry, turning into a plodder who absorbs carries rather than any substantial threat.

Somehow, Green-Ellis keeps his legs churning without a defender ever really challenging him. He picks up the first down. After the play, there’s a slight skirmish between Ike Taylor and a Bengal. Frustration definitely boiling over with the realization the Steelers are about to lose to a divisional opponent on a national stage.

Pittsburgh is forced to use all three timeouts and they don’t get the ball back until after the two minute warning, the offense trotting back out with 1:43 remaining. Game over and an 0-2 start to 2013.

In hindsight, it becomes apparent then the Steelers’ run defense will not enjoy the success it had throughout most of the 21st century.

Brett Keisel sums up the reaction of most Steelers’ fans in the GIF below, slightly putting his arms up as if to say, “What just happened?”

That’s a great way to sum up the entire year, isn’t it?