Arguably the victory that gave Steelers’ fans the first hope of a resurgence in the second half of the year. Their 37-27 victory against the Detroit Lions in Week 11.

We’ve shown the value of Antonio Brown previously in this series but you don’t catch 110 passes for nearly 1500 yards and get featured just once.

Here we see AB at his most dangerous – after the catch.

First and 10 on the Lions’ 47 with 4:08 left in the opening quarter. The Steelers are already sitting on a 7-0 lead, courtesy of an equally impressive 34 yard catch and run by Brown on the team’s first possession.

Just a simple slant route for Brown but as Steelers’ fans have come to know, simple doesn’t mean any less dangerous. With the pocket beginning to break down, Ben Roethlisberger climbs and rifles it to AB, who takes care of the rest. Exploding upfield, he outruns a trail of Lions’ defenders, including a safety with a pretty good angle, into the end zone. It propels the Steelers to a 14-0 lead.

I love everything about this play. Roethlisberger scrambling within the pocket to make the throw. Brown turning a five yard slant into a nearly 50 yard score. Him outrunning the safety, who had turned and took a good angle to the ball. Emmanuel Sanders fantastic block on cornerback Chris Houston, creating the final running lane for Brown. A 14+ point lead, something that had happened for just one quarter in the first nine games combined.

Positive plays from Ryan Clark were few and far between throughout 2013. But look hard enough, and you will find them. Against Detroit, he makes one of his best of the year.

It’s Detroit’s ball, third and five from the Steelers’ nine. The Lions stack two receivers on top of each other to each side. This makes it impossible for the Steelers to press, forcing off coverage.

Detroit basically runs a smash (corner + curl) route. They send Calvin Johnson on the corner and Jeremy Ross into the flats, acting as the curl (the red zone obviously condenses everything). Ross’ route, coupled with Matthew Stafford’s punp fake, holds Ike Taylor, leaving Johnson matched against Clark. Johnson against any safety is an obvious mismatch, much less one on the downswing of his career like Clark.

Clark leaps into the air as the pass reaches its apex, knocking it away. Taylor pops Megatron in mid-air for good measure.

What’s important here is not just the breakup itself but the effect. The Lions fake the ensuing field goal but the holder fumbles, the Steelers’ recover, and the Lions come away empty-handed. In a game where Detroit leads by just four at time time, 27-23, it is obviously a game-changer.

Pittsburgh responds to the tune of an eight minute drive, culminating in a go-ahead Will Johnson touchdown to give the home team the lead for good.

But it all began with Clark.

The Steelers’ defense finished 2013 tied for 29th in interceptions, a paltry 10. But they were able to nab a critical one in Week 11.

First, let’s flash back to earlier in the game. A play that could have been considered for this list, providing yet another example of a “splash” play allowed – Calvin Johnson’s second quarter 79 yard touchdown. Running a post, he finds the middle of the field void of any defender and it’s an easy connection between quarterback and wide receiver. Hard to say what the coverage is but I’m inclined to believe Clark was responsible for the MOF (middle of field). 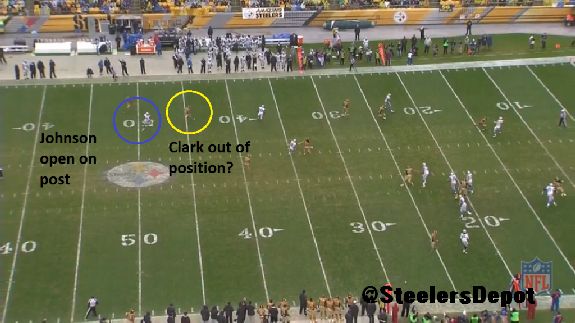 The Lions attempt to go back to the well in the 4th, trailing by three with 4:28 to go. Johnson uses a double-move to twist Clark and runs a post down the middle of the field.

This time, the Steelers are in a two deep shell with Clark and Will Allen. Allen plays it correctly, tracking the ball, and picking it off in front of Johnson.

He returns it 27 yards to the Lions’ 34, putting the Steelers in prime position to extend their 30-27 lead. Which they do five plays later, a 20 yard touchdown to Jerricho Cotchery to seal the victory.

Allen didn’t sign until right before the Week Four bye, but wound up averaging 47 snaps a game and 380 by season’s end. That surpassed Steve McLendon’s total.

Detroit was Allen’s best game, chipping in nine tackles and forcing a fumble. He provided as much stability as one could hope for in a year of relative defensive turmoil. The fuel tank is closer to empty than full, but he provides a lot of comfort for Mike Tomlin and Dick LeBeau.

For that reason, he was an underrated piece of the 2013 squad.