Today, the 34-27 Week Four loss against the Minnesota Vikings in London.

This one makes me queasy, too. In Week Three, we examined a splash play in the run game – Matt Forte’s 55 yard run. One week later and the same thing happens in the air.

Vikings’ second drive of the game, already leading 3-0. 3rd and 4 at their 30. Simple enough route concept, a seven yard curl to prized free agent Greg Jennings. Steelers’ corners are in off coverage, Cover 3. On the catch, the Vikings have already picked up the first down, but historically, these routes don’t go for much more than that. A sure tackle by a defensive back seems likely.

And then Cortez Allen misses. Followed by William Gay. Robert Golden completely overruns it. Downfield, Allen becomes a two-time member of the club. And as an extra punch to the gut, Troy Polamalu’s desperation dive fails. Jennings scores and the Vikings race to a 10-0 lead.

It would be one of the first, but far from the last, in a series of splash plays given up through the air. Unfortunately, that wouldn’t be the only example from this game.

The only thing I like about this is the segue. Again, it’s Cover 3 from the Steelers. Simpson runs a dig that gains predictably gets separation from the corner. That isn’t the problem.

The issue is two-fold and speaks to the Steelers’ coverage woes. Over the top, Golden drives downhill on a seam route by the #2 receiver. He takes himself out of making a play on Simpson’s dig, and just as importantly, there’s no one to get in the way of Simpson after the catch. Underneath, LaMarr Woodley and Polamalu practically end up on top of each other. Blame likely falls on Woodley, straying to far to the middle of the field. 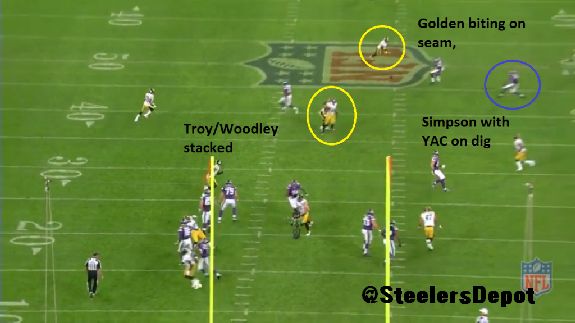 It’s a 51 yard gain before Cortez Allen brings him down from behind. Adrian Peterson would add his second touchdown later in the possession, pushing the Vikings’ lead to 10, 27-17. By the quarter’s end, Minnesota tacks on another touchdown and builds enough of a lead to stave off the Steelers’ eventual comeback.

Simpson finishes the day with seven catches for 124 yards.

I chose this play because it encompasses all the “small names” that burned the team. Simpson’s fantastic performance, Terrelle Pryor’s 93 yard run out of the shoot, Aaron Dobson’s career day, and Daniel Thomas’ shocking performance, the Steelers’ couldn’t slow down these guys. It was that kind of year.

If you excuse me, I’m going to be sick.

This has become a series less in information and more of reliving sadness. But it’s just how the first few weeks unfolded.

The Steelers’ valiantly stage a comeback and have the opportunity to tie the game with less than 30 seconds to play. In a microcosm of the first four weeks, it all goes wrong.

Left guard Kelvin Beachum gets beat on a rip move by Everson Griffin. Ben Roethlisberger is sacked and the ball squirms free, recovered by Kevin Williams and ending the game.

It’s the Vikings fifth sack of the contest and the fifteenth allowed by the Steelers’ over the first four games.

I could write 500 more words on the issues, but the GIFs tell the whole story. Bottom line: the first four weeks proved to be a hole even a 6-2 stretch to close out the year could not overcome.