Another sequence, another loss. Perhaps the most difficult of the year, a 55-31 shellacking at the hands of the New England Patriots in Week 9.

Rob Gronkowski torched the Steelers to the tune of nine catches, 143 yards, and one touchdown in his third game back from injury. This touchdown snare came in the second quarter to put New England ahead 14-0.

It’s far from terrible execution from the Steelers. Troy Polamalu recognizes Gronk down the seam almost immediately and takes a good angle to the ball. Jarvis Jones’ coverage isn’t awful either, but it’s one of the many lowlights of Jones’ rookie year, and the reason why it’s included in this series. Strong throw and Gronkowski is indeed difficult to cover, but the bottom line is it’s a catch, touchdown, and two possession lead for New England.

No matter who the Steelers trotted out to defend the massive tight end, Shamarko Thomas or Cortez Allen, among others, no one could stop Gronk. Or  for that matter, the Patriots’ entire offense.

Late in the third quarter, a Stephen Gostkowski field goal gives the Patriots a slim 27-24 advantage. The Steelers’ punt on their ensuing drive and Julian Edelman takes advantage of some bad coverage, returning Mat McBriar’s punt 43 yards to the Steelers’ 34.

It’s a relatively easy return for Edelman, virtually untouched the first 30 yards. A huge alley appears, centering around the fault of long snapper Greg Warren, who seems out of position running down the punt. Notice how he’s stacked on top of Jason Worilds, creating the lane. 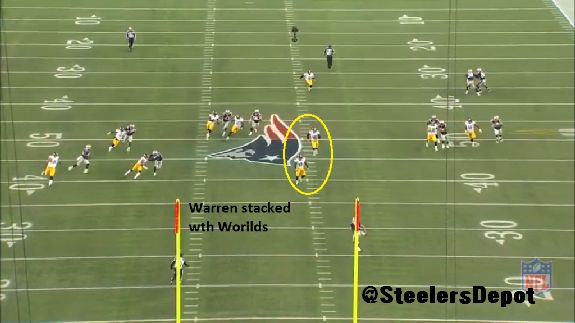 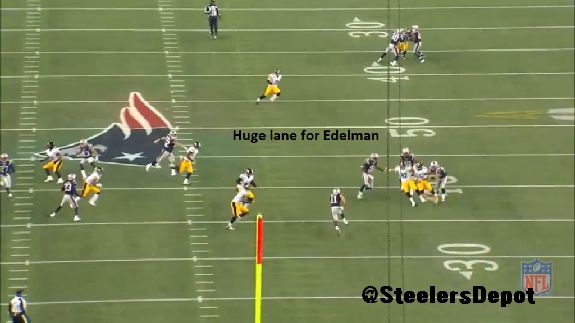 Sure, Warren is not going to put on a Terence Garvin-esque hit, but filling that lane would deter Edelman from immediately cutting upfield and allowing the rest of the defenders to close in.

Just a few plays later, Brady connects with Aaron Dobson on a 17 yard touchdown, pushing their lead back to two possessions. It was the beginning of the Steelers’ unraveling.

Debated putting in Felix Jones’ 10 yard kick return following the Gostkowski field goal on here instead. But the Steelers’ were able to get out of the shadow of their own end zone, and that led me to putting Edelman’s PR here instead. But ten yards, aided by poor blocks from David Paulson, Jonathan Dwyer, and Michael Palmer? Yuck.

There are a lot of plays I could have chosen from this game. None of them positive. From Danny Amendola’s 34 yard touchdown to begin the scoring to Dobson’s 81 yard touchdown catch, there was a lot of ugly.

So why choose a run that comes with three minutes left in the ballgame and the Patriots sitting on a comfortable 17 point lead?

This one play sums up the entire first season. Explosive, marred with injury, and just as painful to watch.

Grinding out the clock, it’s just a simple counter with the guard trapping from New England. But it’s executed so well….or defended so poorly by the Steelers. Blount, like Edelman, is hardly touched until Troy Polamalu pounces on him on the five.

Strike two and three occur at the same moment, a feat so impressively terrible that not even Clint Barmes could accomplish it at the plate. Ike Taylor attempts a desperation dive towards Blount but misses and falls to the ground. Cameron Heyward leaps over Taylor to try and avoid him, but his knee catches the Steelers’ cornerback on the back of the head, concussing Taylor. 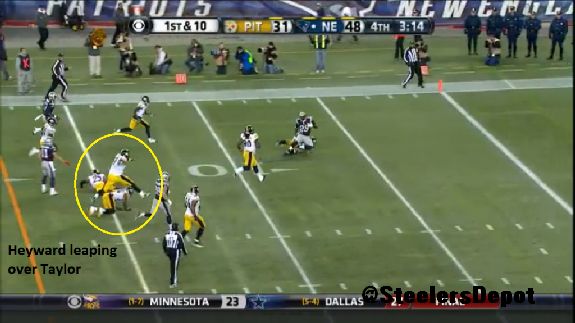 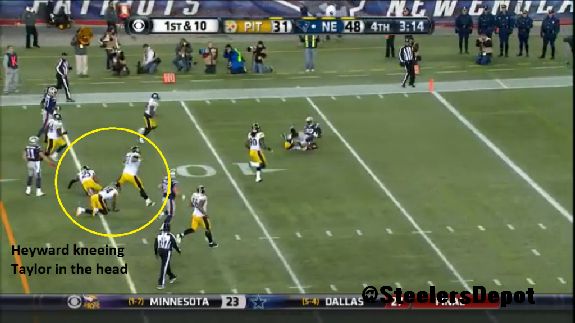 Heyward lands awkwardly and pulls up lame at the end of the play, holding his left leg. 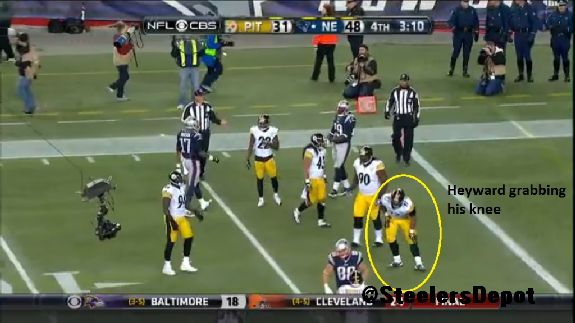 Neither injury proves to be serious in the long-term with respects to missing games – both return the following week (though a concussion should always be considered “serious” no matter what). But it’s a microcosm of the entire game and the Steelers’ first eight contests.

If you happen to have NFL Rewind or access to re-watching this game, take a brief look at the body language of the team after this play. This team is defeated, in score and spirit.

That’s something I rarely say because it’s difficult to confidently see. But here, it’s obvious.

This is rock-bottom for the Steelers. Ain’t a pretty sight.

Blount scores on the next play, capping the scoring and giving New England a 55-31 victory.