After the mini two-game winning streak, back recapping a loss. The Oakland Raiders’ 21-18 victory in Week 8.

Painful to see again, I know, but it has to be included. I’ve written about the Steelers’ getting badly outscored in the first quarter during the first half of the year (64-19, in case you missed it) coupled with the high amount of “splash” plays allowed.

This one falls into both categories.

A holding call on the opening kickoff places the ball on the Raiders’ seven to begin their drive. Great start.

First play from scrimmage. On a zone read, Terrelle Pryor runs 93 yards to the house. Not so great.

LaMarr Woodley and Lawrence Timmons crash down on the back, leaving no one to protect the edge. Ryan Clark doesn’t realize Pryor has the ball until it’s far too late. It’s one of those plays where the Raiders could score with ten men, which is pretty much what happens. FB Marcel Reese, designed to lead block, has the luxury of watching defender after defender take themselves out of the play. It’s the easiest play of his life. 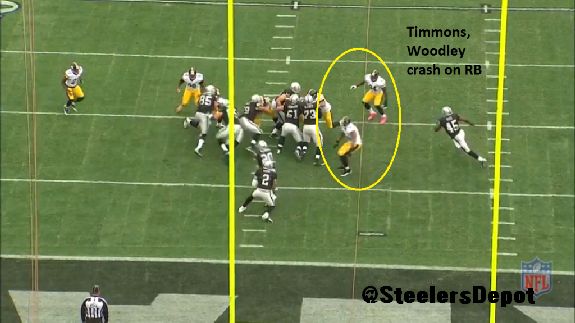 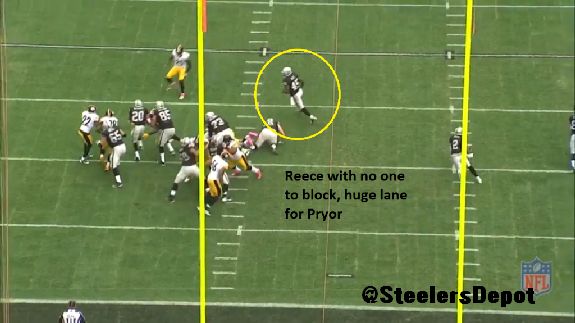 One in a long list of plays that make you shake your head and sigh.

We’ve gone over the woes on offense and defense, but special teams can’t be ignored either. Punting was one of the team’s serious issues in 2013 and an underrated area to watch for in 2014.

Zoltan Mesko signs six days before Week One, the team opting against sticking with Drew Butler. But he never lives up to expectations.

On this play, there are two identifiable problems. The larger issues lies with David Paulson’s inability to prevent Rashad Jennings from winning inside and deflecting Mesko’s punt.

The smaller issue is with Mesko himself, allowing the ball into his chest instead of catching cleanly out in front of him. It only wastes a fraction of a second, but when punting – and generally speaking, anything in football – a fraction of a second determines the difference between a clean punt or not. 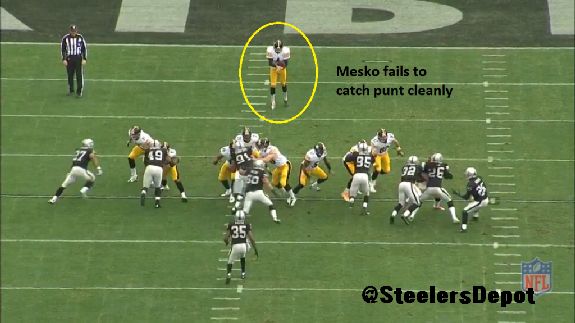 Mesko would have made for a bad wide receiver.

Jennings deflects the punt and the ball travels three measly yards, downed at the Steelers’ 26. With wonderful field position, the Raiders make quick work of the Steelers’ defense and five plays later, Darren McFadden finds the end zone on a seven yard run.

Just midway through the first quarter and the then 2-4 Raiders jump out to a 14-0 lead. It’s enough of a cushion to hold off a late Steelers’ rally.

Mesko would not see another game in a Steelers’ uniform. Mat McBriar replaces him two days later. He proves incapable of solving the team’s punting woes either – the Black ‘n Gold average 41.1 yards per punt, 31st in the league.

We’ll slightly stray from the norm in this series. As consistent as a sunrise, the Steelers always fight the injury bug on the offensive line. In Oakland, they were KO’d.

Of course, we’re not focusing on one play here. But throughout the course of this game, the Steelers’ lose three lineman.

Foster exits on the first play of the second quarter with a concussion, Guy Whimper coming on to replace him. 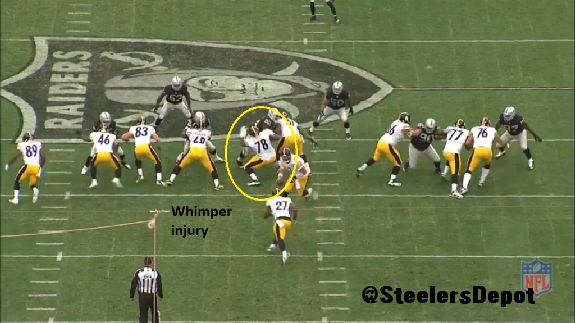 Five minutes later, on the same drive, DeCastro is lost after a Raider defender rolls into the back of his leg. That’s when things get, uh, interesting, and certainly not in a way that makes Mike Tomlin happy. 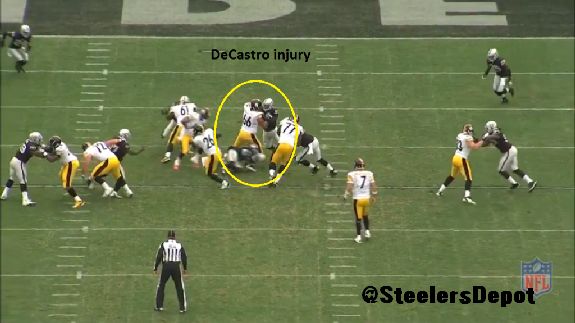 Out of interior lineman, Wallace moves to right guard, replacing DeCastro. To fill the void at left guard, Beachum kicks inside from left tackle. And in a final move, Mike Adams comes off the bench to replace Beachum at tackle. Got it?

With that, the Steelers are down to just five lineman.

The injuries were numerous during the year and in a nutshell, this game shows that. From Maurkice Pouncey’s and Velasco’s season-ending injury to Gilbert gritting through the year, and all the bumps and bruises in-between, it is difficult to build consistency with such a revolving group.