Today’s edition brings you Week 13 when the Baltimore Ravens snapped the Steelers’ three-game winning streak with a 22-20 victory.

This play gets included for two distinct reasons. From an “in-game” aspect, it’s yet another splash play allowed by the Steelers. Another one that comes early in the game; this one on the Ravens’ first drive. It places Baltimore on the Steelers’ one and three plays later, Joe Flacco again finds Smith in the end zone.

But the other aspect that’s worth pointing out is some unfair criticism of Ike Taylor. No, he isn’t getting any better and it’s fair for the team to remove him from the role of “shadowing” #1 wide receivers, but poor safety play was a larger crime than the cornerbacks in 2013.

On this play, the Steelers are clearly running Cover 3, rotating out of a two deep shell pre-snap. The two cornerbacks play their respective third of the field, and the single high safety patrols the middle. Goal is to carry anything vertical.

Quick breakdown of the Microsoft Paint mess you see below. 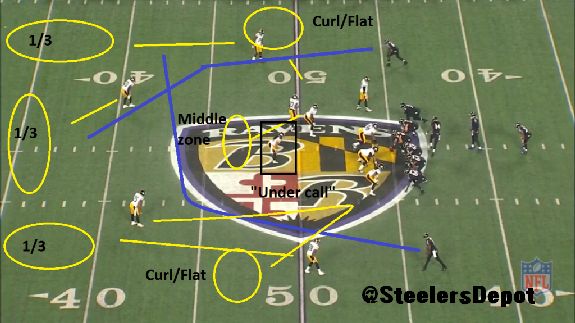 Cover 3, as explained above. William Gay has curl/flat responsibility. Cover the curl, drive on anything into the flats. Another reason why Steelers’ cornerbacks must be solid tacklers. Ryan Clark rotates to support the run, then covers the curl/flat when he reads pass.

Lawrence Timmons has the middle zone.

Most interesting concept is one I’m still trying to learn about, to be honest. If you follow me on Twitter,   this deals with material I was asking for the other day – pattern reading. Playing a matchup zone, in essence.

Pay attention to the dynamic of Cortez Allen and Troy Polamalu. Allen’s job is to carry routes vertical. So when Jacoby Jones bends his route to the inside on the deep crosser, he breaks off. Whose responsibility is this to pick it up? Polamalu.

How does this get communicated? With an “under” call. In the GIF, you can see Allen point to Troy. Couple that with him likely yelling “Under” and it alerts Polamalu to an “in” breaking route the safety has to pick up.

So it becomes man coverage as Troy follows Jones across the field. Another reason why I’m sure Will Allen had no business driving on the crosser.

But Allen bites on the crosser anyway. With Smith running a post and Allen flat-footed underneath, there’s no one to defend vertically. Cortez Allen makes a last ditch attempt to make a play on the ball but understandably can’t close in time. 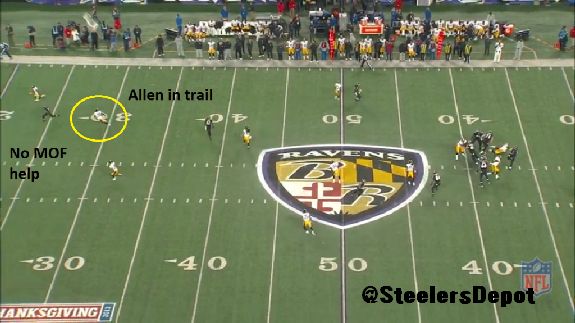 I can’t be positive of it, but Taylor probably gets knocked by statistic-based sites for allowing the catch. Clearly, it’s no fault of his own. He expects Allen to do his job, play the deep middle and take on any deep routes that get passed off, like Smith’s post.

This isn’t a one-time occurrence, either. Taylor had his fair share of faults, but became the scapegoat too often in 2013.

With a cerebral and conservative in coverage safety like Mike Mitchell, expect Ike Taylor to “magically” have a bounce back season in 2014. Even though in reality, not much will have changed in his game.

Mid-second quarter with the Ravens leading 7-0. The Steelers’ first chance at points come on a a 49 yard attempt for Shaun Suisham.

Perhaps it was the crowd noise, maybe a momentarily lapse in focus, but Suisham starts to the ball too early and throws the timing of the snap/hold off. Holder Mat McBriar just receives the ball by the time Suisham reaches him, ready to boot it.

I’d like to think that McBriar’s world went into slow-motion, for just a moment. An internal disbelief. To stray from the norm. Catch snap, put ball down, kicker sends it on its way. It’s almost muscle meory at that point.

Catch snap, ball down, then…nothing. It’s like a CD that skipped.

As quickly as time slows down, it ramps back up to real-time. McBriar chest passes the ball to Suisham who streaks for the right side. Gale Sayers, Shaun Suisham is not and the kicker is quickly brought down for a twelve yard loss.

A 12 play drive that the Steelers come away from empty-handed. Adding salt to the wound, Baltimore successfully converts a field goal on the ensuing drive.

It wasn’t funny at the moment but in hindsight, it’s pretty hilarious to watch Suisham try and scurry away from an NFL defense. But it unquestionably affects the end result. As I’ve mentioned before, every point in a Steelers/Ravens matchup should be treated like gold.

How much more really needs to be written about this play? After a Jerricho Cotchery touchdown that brings the Black ‘n Gold within two, the Steelers fail the two-point conversion and fall to the Ravens a minute later.

It’s the play that defines Emmanuel Sanders season, his drop on this back shoulder fade becoming the play Steelers’ fans always refer to when discussing the now Denver-bound wideout.

I’m in the minority to this point, but defending his play, the pass is far from routine for Sanders. Is it catchable? Sure. But this isn’t the 6’5 Calvin Johnson reaching out for the ball. It’s the 5’11 Sanders, trying to track the ball on an awkward angle with the cornerback partially blocking his line of sight. 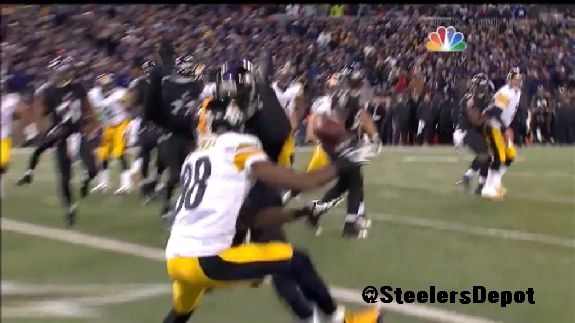 Is there blame to be dished out? Sure. It’s a critical moment and every player must step up. But to an extent, it’s unfit criticism and Sanders should not be labeled as “drop prone” because of one play. His seasonal percentages, just 2.6%, were just as good as Heath Miller and Cotchery while being far better than Antonio Brown (4.2%).

While the playcall has a big influence on Ben Roethlisberger’s decision, you can’t wait to throw the back shoulder fade, the criticism stings more because in hindsight, Sanders should not have been thrown the ball.

As I’ve pointed out repeatedly, the Ravens’ cornerbacks get mixed up on their “banjo” call (Dbs trade off) responsibilites to the wide side of the field, both converging on the slant and leaving Antonio Brown wide open. Had Big Ben seen that, it’s an easy six. 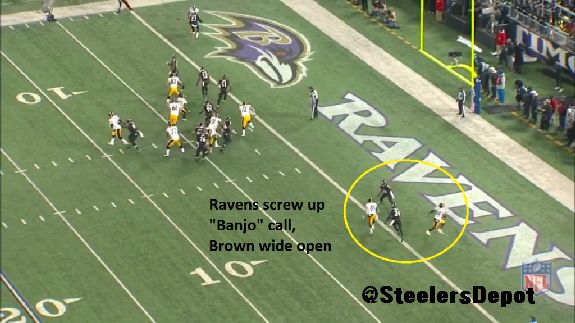 Tough to fault Ben, but it’s one of those moments that make you go “I wish we would’ve had that back” in Monday’s film room.

This play makes the list regardless of blame.. It’s the decisive play to determine the game. With the loss, the Steelers fall back to 5-7 instead of reaching the .500 mark.

A punch to the gut, for sure.

And to the season.