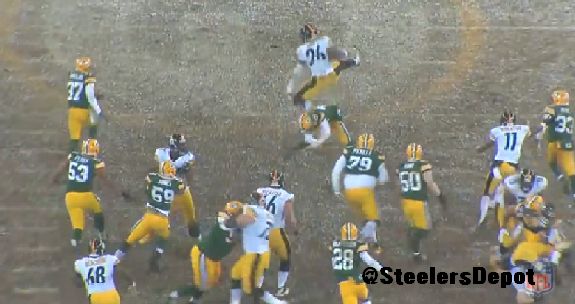 There are roughly a million candidates in the Steelers’ heart attack-inducing 38-31 win over the Green Bay Packers during Week 16, but here are the top three.

His best rushing performance of the season, 26 carries for 124 yards and a score, that featured his signature run of his rookie campaign.

To set the scene is to relive a little bit of pain and a lot of anger. With just over five minutes to play in the third quarter and the Steelers leading 17-14, Mason Crosby and the Packers attempt to tie things on a chip shot 23 yard field goal.

Steve McLendon blocks it and the Steelers seem to recover. Ryan Clark grabs the ball, fails to lateral it, and Ziggy Hood bats it out of bounds.

At worst, it’s a penalty on Hood for illegally batting the ball, but the working assumption is the Steelers’ have gained possession. But the refs see it differently, claiming Clark didn’t have possession and the penalty is assessed in the Packers’ favor, granting them a first down.

Bottom line: Green Bay is given new life and they cash in, scoring on two yard Eddie Lacy plunge on the next snap. The tables dramatically turn, Green Bay leading Pittsburgh 21-17.

For a 6-8 team with its playoff hopes on life support, it would’ve been easy to give up. Pack it in, start fresh next year, start deciding on where you want to vacation in the meantime. How would the Steelers respond to getting punched in the teeth?

Le’Veon Bell answered that. Emphatically. On the Steelers’ first snap, Bell runs – no, hurdles – his way to a 25 yard gain. For a moment, it’s difficult to discern if this play took place in 2013 or 1978.

Power O, Ramon Foster pulling, Bell running downhill, jumping the safety, and then dragging multiple defenders along the way. All in the snowy December weather at Lambeau Field. I’m not one for nostalgia but man, it’s a glorious play.

It’s the catalyst the Steelers need to retake the lead, scoring on a Matt Spaeth touchdown three minutes later.

The beginning of Cortez Allen’s season derails due to injury. A torn meniscus requires surgery in camp and although he plays in the season opener, he goes down with an ankle injury that forces him to miss Weeks 2 and 3.

But Allen comes on strong in the last quarter of the year, regaining his starting role, and his elevated performance has a hand in the team’s decision to have their cornerbacks play sides as opposed to asking Ike Taylor to shadow.

His best game arguably occurs against the Packers and his 40 yard pick six is the highlight.

It isn’t an enormously difficult play. In a wild set of sequences, this play takes place immediately after Spaeth’s score. Matt Flynn attempts to throw a smoke screen to the right sideline but Andrew Quarless bumps into the quarterback as he releases, causing the pass to miss its mark. Allen capitalizes and has a free path into the end zone. 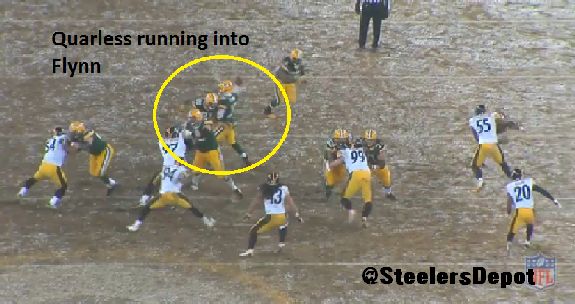 In the span of less than four minutes, the two teams combine for 21 points and the scoreboard bloats from 17-14 to a 31-21 Steelers’ lead.

But it was an advantage Pittsburgh wouldn’t maintain.

By the end of the fourth quarter, the Steelers’ lead has evaporated, the game tied at 31.

But Pittsburgh pins Green Bay at their own ten, facing a 3rd and 8, at the two minute warning. Get a stop, force a punt, and attempt to drive down the field to win, right?

Troy Polamalu makes things a lot easier. Flynn attempts to scramble to move the sticks, but Polamalu hunts him down, strips the quarterback of the football, and Brett Keisel recovers.

Bell finds the end zone several plays later and despite a last-minute drive to try and tie it back up, Pittsburgh staves off Green Bay to come out on top, 38-31.

Again, it just shows that even in a down year defensively that is riddled with adversity, Troy Polamalu can be counted on for a big play at a crucial moment.