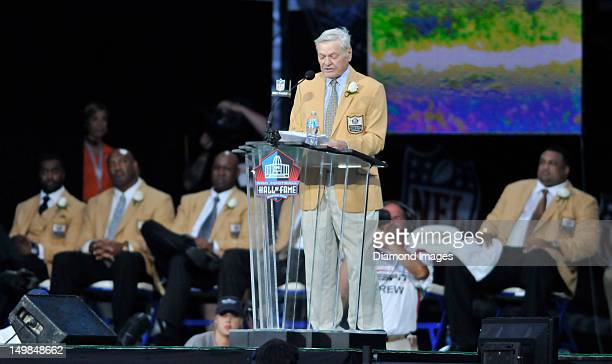 We’ll take this position-by-position. I move into the secondary today with cornerbacks.

I mentioned Butler in a recent episode of my Terrible Take so if you listened to that, you’ll read similar information here. Butler was a UDFA out of local St. Bonaventure in1951 and immediately played his way into the starting lineup, starting 10 games his rookie season. He was an absolute ballhawk and fierce hitter in days when they were very few rules about how you could tackle runners. In Butler’s first four seasons, he intercepted 25 passes and returned four into the end zone. In the 1953 finale against Washington, Butler picked off a team-record four passes in a narrow, one-point Steelers’ victory to get the team to .500 for the season, a real achievement back in those days.

Butler didn’t make his first Pro Bowl until 1955, a year where he didn’t intercept a single pass, but would go on to be voted there four times. He made a pair of All-Pro teams including in 1957, when he led the league with 10 interceptions. His playing career ended after suffering a serious knee injury against the Philadelphia Eagles late in 1959, finishing his NFL days with 52 picks. That still ranks the second-most in team history behind only Mel Blount and his 57.

Butler soon became the director of BLESTO, one of the draft’s two national scouting agencies, and served in that role for 44 years. He was inducted into the Hall of Fame in 2012. His three minute, 42 second speech is believed to be the shortest in Canton history. Butler is without a doubt one of the best undrafted free agents in team history and remains one of the best cornerbacks, drafted or not, the Steelers have ever produced.

A UDFA out of Mississippi State, he initially got into coaching and was hired as a college track and field coach. But the Steelers made a late offer and Daniel accepted. He started 59 games for the Steelers across the early to mid 60s. In his first two years, he intercepted eight passes and ran one back 49 yards for an opening score in a 1962 win over the St. Louis Cardinals. That may have been in more of a safety role but Daniel played corner later in his Steelers’ career. He picked off three more passes and had a fumble return for a touchdown in 1965.

He spent his final three years in the NFL with the Los Angeles Rams playing primarily as a reserve before a knee injury ended his career.

Daniel was inducted into the Mississippi State Hall of Fame in 1986. He opened up Athletic Clubs in the south while coaching local baseball and football teams. Late in his life, he suffered from dementia and donated his brain after his death in 2015. Doctors confirmed he suffered from severe CTE. He reportedly suffered at least eight concussions during his NFL career and probably had several more.

Washington’s name wasn’t called in the ’82 draft. From Mississippi Valley State, the same school that produced Jerry Rice (I believe they were teammates for a short time) and Deacon Jones, Washington signed with Pittsburgh. He would only be the team’s starter for one season, 1984, but he made the most of the chance. He picked off six passes, second-most on the team only behind Donnie Shell’s seven, and returned two of them for touchdowns. All six picks came over a four week span, Weeks 2-5, as the Steelers went on to win three of those games.

Since the merger, the only Steelers to intercept a pass in four straight games are Mel Blount, Troy Polamalu and Washington.

Washington was dealt to the Cincinnati Bengals midway through 1985 and was out of the league after the season. In four years with the Steelers, he appeared in 41 games, started 14, and intercepted seven passes. He soon got into coaching, rose up the ranks, and was named North Carolina A&T’s head coach in 2018. He earned Internet fame for being the coach who called out “bring me my money” after an upset win over East Carolina.