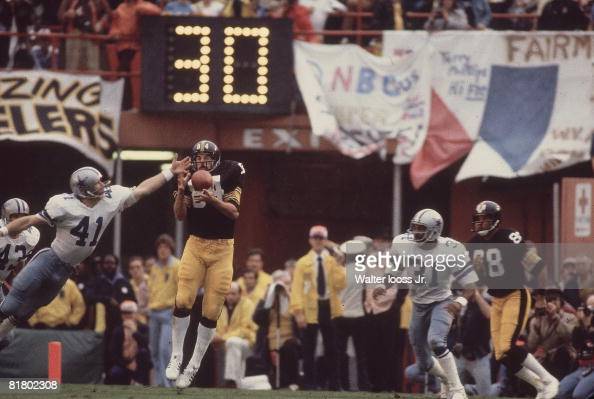 New series we’re kicking off on Steelers Depot. Earlier this week, we relayed Sports Illustrated’s list of the all-time undrafted team, one that included James Harrison. And it got me to thinking — what would the all-Steelers’ list look like? A franchise that’s been around since 1933 and littered with household names who began their career undrafted.

First name from the Steelers’ dynasty era. The 70s Steelers were largely built through the draft and the undrafted pool was smaller in an era where there were 17-round drafts. Grossman slipped through the cracks hailing from Temple, despite being a productive player on quality Owls teams.

As a rookie, he caught 13 passes and put up similar numbers in 1975. He’s perhaps best remembered for scoring the Steelers’ first touchdown in Super Bowl X, a seven-yard score to tie the game in the first quarter. It was his only catch of the day, but a crucial one. Pittsburgh went on to beat the Cowboys and capture their second straight trophy.

Grossman’s production would pick up as the Steelers became more willing to throw the football with Terry Bradshaw, Lynn Swann, and John Stallworth. His best season came in 1978, another year that ended with the team hoisting the Lombardi, grabbing 37 passes for 448 yards and one touchdown.

He would go on to play through the 1981 season, part of all four Super Bowl winning Steelers’ teams. His entire career was spent with the black and gold. In total, he played eight years, recording 119 receptions for 1,514 yards and five touchdowns. He wasn’t a playmaker, but on those great teams surrounded by so much talent, he didn’t have to be. He did his job, he did it well, and he’s the best undrafted tight end to ever be a Steeler.

Pretty large gap between #1 and #2 when it comes to Steelers’ tight ends. Gothard signed as a free agent out of Alabama in 1985. He caught six passes as a rookie then stepped up as a sophomore, grabbing 21 passes and his first career touchdown. He would find the end zone the next two seasons, finishing his Steelers’ career with 41 grabs and three scores. Gothard’s best known for catching what should’ve been the game-tying touchdown for an incredible comeback against Penn State, but the refs blew the call and ruled him out of bounds.