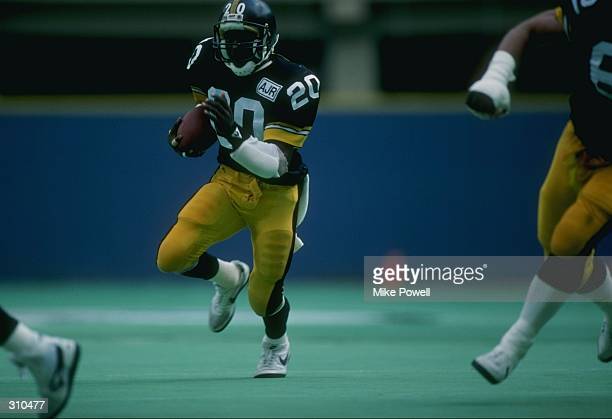 We’ll take this position-by-position. Next up, the greatest UDFA wide receivers in franchise history.

Yes, sometimes he was the butt of the joke with the “Hands Of” name sandwiched in-between. His hands were far from the greatest. But he’s one of the fastest Steelers in team history and it’s a surprise he went undrafted in 1987. We named him the second-fastest Steeler in history, and Chuck Noll called him the fastest player he ever saw. Said Stone had “beep beep” speed.

Stone made an impact as a receiver, returner, and gunner. He made the team as a rookie and served as the Steelers’ starting kick returner. He returned a kick 92 yards for a touchdown in 1988 (there’s a clip of it in that link) and later in his Pittsburgh career, his role as a receiver began to expand. In 1991, he caught 32 passes for over 20 yards per reception and finished second on the team with five receiving scores. In his final season with the team, he caught a career-high 41 passes and found the end zone three times — two receiving and one rushing.

It doesn’t count for our purposes, but he spent the rest of his career with the Panthers and Jets, playing until he was 36 years old. Even in that final season, he was still the Jets’ kick returner, and in 1999, was credited with 15 special teams tackles.

Still the only NFL player to spend his full college career at Tiffin (RB Chris Ivory spent one year there), the Steelers scooped Washington up as a UDFA in 2005. So many good UDFAs around that time (Willie Parker, James Harrison, and Washington).

He barely played his rookie year but caught his first pass in the AFC Title Game against Denver, a 13-yard snag, and soon enough established himself as a deep threat. From 2006 to 2008, he averaged 16.4 yards per catch and caught nine passes of 40+ yards.

In Pittsburgh he won a pair of Super Bowl rings before cashing in with the Titans, spending six seasons with them before wrapping up his pro career with Houston.

Here’s a cool look-back at his background and story, including then-wide receivers coach Randy Fichtner explaining Steelers’ scout Phil Kreidler was the man who convinced the team to sign Washington.

A UDFA out of Louisville, you could tell early on he had potential to stick. Rogers did, catching 78 passes across three seasons for the Steelers. His biggest impact came his rookie year, posting a 48/594/3 line. I’ll best remember him for this sensational 20-yard grab against the Ravens on Christmas Day, setting up Antonio Brown’s Immaculate Extension.