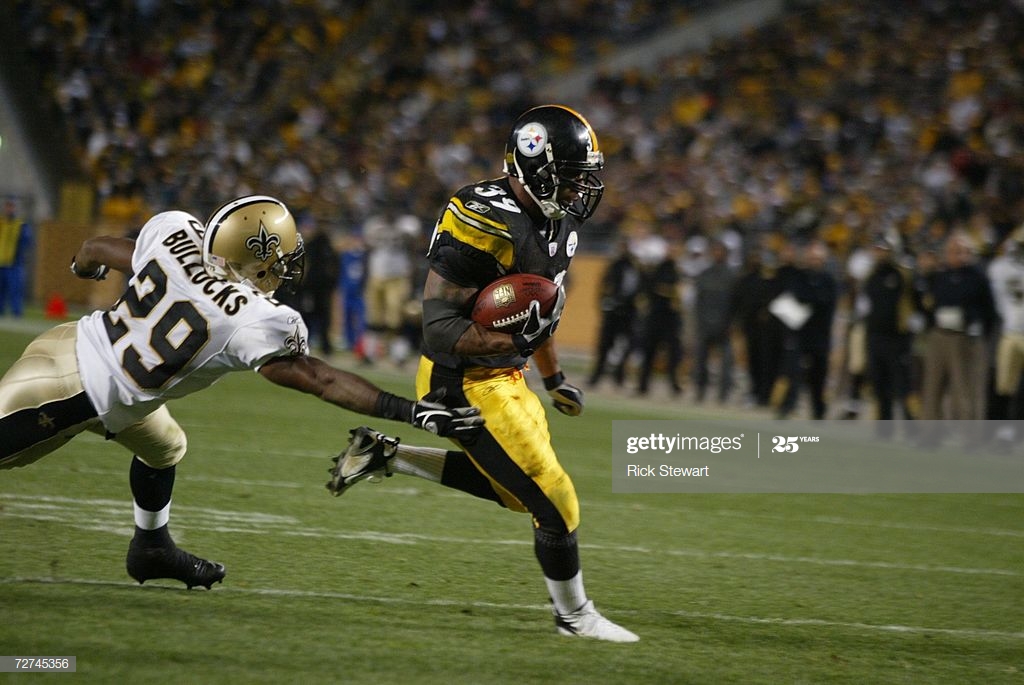 New series we’re kicking off on Steelers Depot. Yesterday, we relayed Sports Illustrated’s list of the all-time undrafted team, one that included James Harrison. And it got me to thinking — what would the all-Steelers’ list look like? A franchise that’s been around since 1933 and littered with household names who began their career undrafted.

We’ll take this position-by-position. We move along with the greatest UDFA RB in team history.

Fast. Willie. Parker. Need I say more? I probably don’t, but I will anyway. He’s one of the most interesting stories in recent Steelers’ history.

It’s still confounding how the man who held the record for the longest rush in Super Bowl history can play third fiddle on his 2-10 North Carolina team. Parker sat behind RBs Ronnie McGill and Jacque Lewis in 2003, carrying the ball 48 times and averaging a measly 3.8 yards per carry. McGill nor Lewis played in the NFL. Parker, for a little while anyway, went on to shine bright.

Even in college, he flashed that speed. In 2001 against Maryland, he took his first carry to the house, 77 yards, running away from the entire Terps’ defense.

Presumably based on those explosive moments, the Steelers offered him a couple thousand dollars to sign as a UDFA after the 2004 draft. He picked a good year to latch onto the roster. With the Steelers coasting into year’s end with a 14-1 record and everything locked up, they sat starters for their finale against Buffalo. That gave Parker his first significant action, and he didn’t disappoint. He carried the ball 19 times for 102 yards, including a 58-yard run late in the third quarter to set up a Jeff Reed field goal.

With Jerome Bettis in the twilight of his career, the team turned to Parker to be their lead runner in the Steelers’ ground-game led offense. He would be the team’s leading rusher each of the next four seasons, nearly hitting the 1,500 yard mark in 2006 to go along with 13 rushing touchdowns. Of course, his 75-yard run in Super Bowl XL, following behind Alan Faneca and then bursting to daylight is the play he’s remembered best for.

Parker’s career hit a wall when he broke his leg in a primetime game against the St. Louis Rams in 2008. By 2009, Rashard Mendenhall, drafted in the first round the year prior, took over as the team’s #1 back. Parker was held under 100 carries and didn’t once score on the ground. In his last big moment, he exploded for 146 yards and two scores in the team’s Divisional win over the San Diego Chargers as the Steelers went on to capture their sixth Lombardi.

Redman was from the obscure Bowie State whose “suddenness and glide” earned him some fan-favorite status. He was a backup/committee back, never a full-fledged starter for an entire year, but had five career rushing touchdowns in his career. His most famous TD came through the air in the waning moments against Baltimore in 2010.