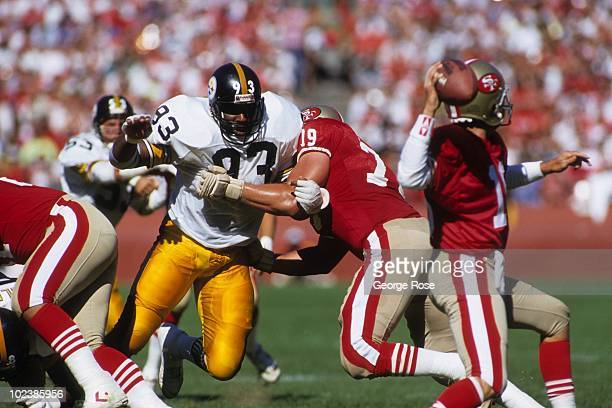 We’ll take this position-by-position. Continuing with the defensive line with the top two UDFA defensive ends.

A forgotten member of the Steel Curtain who admittedly entered the mix relatively late, though just one year after the likes of Jack Lambert and Donnie Shell. Banaszak went undrafted in 1975 out of Eastern Michigan. That makes him the original “MAC Guy” (For all you Buzz Killingtons, EMU technically didn’t join the MAC until 1976).

He started just five games over his first three seasons. But Ernie Holmes’ struggles with weight got him sent packing to Tampa Bay for 1978 and Banaszak was elevated into the starting lineup. He won Super Bowls in ’78 and 1979, starting 59 career games for Pittsburgh through 1981.

Stats weren’t as well-tracked in those days as they were now. In fact, sacks became official the year after his final one with Pittsburgh. But he holds a career Approximate Value of 40, the same as Holmes had in Pittsburgh. Banaszak’s football days weren’t done after Pittsburgh. He joined the USFL’s Michigan Panthers and won a title with them in 1983, holding off a comeback by the Philadelphia Stars.

Exit Banaszak, enter Willis. An undersized defensive linemen at 6’1″, 260 from tiny Northeastern, he made a much more immediate impact. A starter by his sophomore year, he posted a whopping 14 sacks, the most by any Steeler and seventh-most in the NFL. Drawing attention from the league, his sack numbers would dip the next two years before resurging with 12 of them in 1986.

Willis would go on to play nine years in Pittsburgh, starting 88 games and registering 59 career sacks. He spent two more years in the league, one with Buffalo and another with Washington, before hanging up his cleats for good.

In Pittsburgh, his sack number is still officially fourth all-time, though Cam Heyward figures to lap him by year’s end. Still, Willis currently holds the official record for most sacks by a Steelers’ defensive linemen. Unofficially, however, we know the likes of Joe Greene and other Steel Curtain members have more.

He got the coaching bug after his playing days, bouncing around schools like Cincinnati, Boston College, and North Carolina State. He’s now local, hired as an assistant coach for Edinboro University last season.

A much less obvious name to include on this list. A native of Glassport, PA, he attended St. Bonaventure. After serving in the US Army during World War II, Pittsburgh signed him as a 26-year old rookie in 1950. He played just three seasons with the Steelers but started 16 games across 1951 and 1952 and is listed as recording a one-yard pick-six in 1952. Hays finished up his pro career by making nine starts for the Packers in ’53.

Just like the other names on this list, Hays also got into coaching. He spent one year as an assistant with Dayton but remained local for most of his time, coaching at Elizbeth Forward, his hometown of Glassport, Monessen City, and Braddock High School, all in southwestern PA.