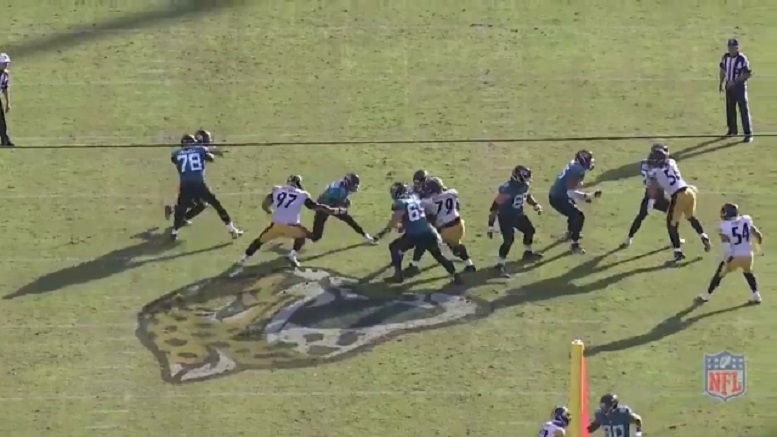 We’ll now move this series along once again by looking at and contextualizing the eight sacks that Steelers defensive lineman Cameron Heyward registered during the 2018 season.

Against the Cleveland Browns in Week 1, Heyward recorded his first sack of the 2018 season. On this play, defensive end Stephon Tuitt beat the Browns right guard to the inside initially off the snap and that win forced quarterback Tyrod Taylor to pull the football down and escape the pocket to his left. Heyward, who had twisted to the outside was able to track down the escaping Taylor for the sack.

In the second quarter of the Steelers Week 5 game against the Atlanta Falcons, Heyward registered his second sack of the season on a 3rd and 19 play. At the snap of the football, Heyward bull-rushed right over the Falcons center very quickly and even drove the player into the legs of quarterback Matt Ryan. Heyward quickly corralled Ryan for the sack right before outside linebacker T.J. Watt could get to the quarterback.

In the third quarter of the Steelers Week 5 game against the Falcons, Heyward registered a half a sack along with inside linebacker Jon Bostic. On this first and 10 play, Bostic came late on a delayed blitz after seeing the Falcons running back, who he was responsible for, stay in to block. The Steelers sent five players after Ryan on this play as part of a cornerback blitz. After Ryan is squeezed by the pressure and formed to step up into the pocket, Bostic and Heyward are both there to take him down for a shared sack.

In the first quarter of the Steelers Week 10 game against the Carolina Panthers, Heyward registered his first of two sacks on the day. On this sack, The Steelers sent five after Panthers quarterback Cam Newton and the scheme seemingly created some confusion for the Carolina offensive line. Heyward was allowed a free pass at the snap and a free run at running back Christian Mccaffrey, an obvious mismatch. Heyward easily ran over the Panthers running back to just beat Watt to Newton for the sack.

In the fourth quarter against the Panthers, Heyward registered his second sack of the game. On this play, Heyward starts his rush up the field and in the process occupies both the left guard and left tackle and that in turns helps outside linebacker Anthony Chickillo gain the edge, which forced Newton to step up some into the pocket. Heyward then converts speed to power and his great hand placement in the chest of the guard allows him to sit the offensive lineman down. Good coverage down the field provides Heyward enough time to finish Newton for the sack.

Against the Jacksonville Jaguars in Week 11, Heyward registered another sack on a 3rd and 17 play in the fourth quarter. On this sack, Heyward and defensive tackle Javon Hargrave work a great inside stunt to perfection. Hargrave’s effective slant to the inside takes the right guard with him and it opens up a nice lane for Heyward to loop into unimpeded. Jaguars quarterback Blake Bortles winds up being a sitting duck for Heyward as he has no open option down the field on 3rd and very long.

Against the Denver Broncos in Week 12, Heyward registered a half a sack with Hargrave in the fourth quarter. On this sack, both defensive linemen got great instant pressure. Hargrave beat the right guard to the left, while Heyward drove the center directly back into the lap of Broncos quarterback Case Kennum. The two Steelers easily get into the legs of Keenum to trip him up for the quick sack.

Against the Cincinnati Bengals in Week 17, Heyward registered two more sacks to close out the regular season. His first of two sacks in that game came in the third quarter and on a 2nd and 12 play. On this first sack, Heyward is the beneficiary of  great pressure provided from the other three Steelers pass rushers on the play, Watt, Tuitt and outside linebacker Bud Dupree. Heyward still made sure to help his own cause by filling a possible escape lane. He just did beat Dupree and Watt to Bengals quarterback Jeff Driskel for the sack.

Heyward’s final sack of the 2018 season came in the fourth quarter of the finale against the Bengals and on a 3rd and 2 play from the Steelers 7-yard-line. The Steelers rushed just 3 players on this play and dropped 8 into coverage and after initially getting off to the outside of the left tackle, Heyward counters back to the inside and to a huge rush lane. After not liking his first few reads, Driskel turns to his left to find Heyward coming full force at him. Good coverage helped facilitate this sack for Heyward.

Summary: There’s not really much to add that’s not already known about Heyward to this point. He is a smart and powerful pass rusher not only from the edge, but inside as well. He’s a dangerous player to leave in a one-on-one battle no matter where he lines up. He works extremely well in stunts and very rarely does he not finish an exposed quarterback. The better the pressure is from other rushers the more dangerous he becomes. Heyward has 20 sacks over the course of the last two seasons and he’s primed for another 10 or more in 2019 if he stays healthy.