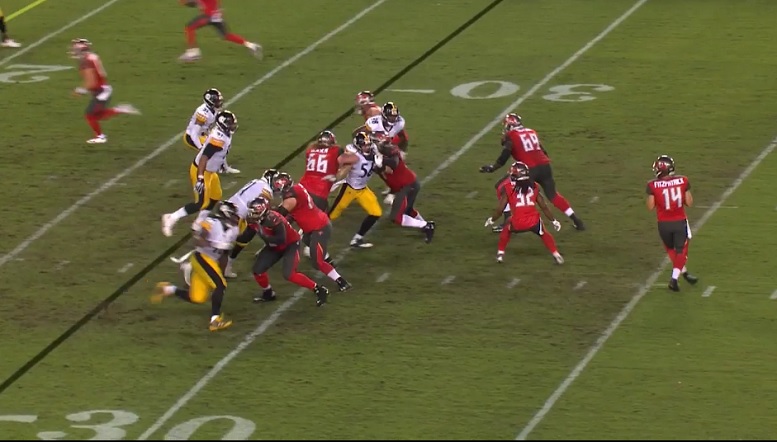 We’ll now move this series along once again by looking at and contextualizing the one and a half sacks that Steelers outside linebacker Anthony Chickillo registered during the 2018 season.

Later in the first quarter of the Steelers Week 3 road game against the Tampa Bay Buccaneers, Chickillo registered his first sack of the season on a third and 8 play. At the snap of the football, Chickillo used a nice move to the inside that resulted him breaking through the A-gap after first crossing the face of the right guard. After winning at the line of scrimmage, Chickillo was again able to cross the face back of the running back, who had first committed to helping pass protect to the outside. This quick access to the Buccaneers backfield by Chickllio, when combined with the plaster coverage by the Steelers secondary had on this third and long play, resulted in the outside linebacker easily corralling quarterback Ryan Fitzpatrick for the sack.

Later in the first quarter of the Steelers Week 17 home game against the Cincinnati Bengals, Chickillo registered a half a sack along with defensive end Stephon Tuitt on a first and 10 play. This sack, however, is mainly a result of Steelers inside linebacker L.J. Fort quickly beating a half-hearted block by the Bengals wide receiver on the edge before he released to the flat. Fort’s pressure of Bengals quarterback Jeff Driskel forced an attempted escape to the left side of the offense. Chickillo, who had rushed up the edge from the right outside linebacker spot on this play, easily recognized the attempted quarterback escape and quickly disengaged from the Bengals left tackle to retrace his path and sack Driskel along with some assistance from Tuitt. The Bengals drive stalled after two more plays.

Summary: Chickillo’s 1.5 sacks in 2018 was his lowest output since his rookie 2015 season. That output came via roughly 150 pass rush attempts throughout the 2018 regular season. His one full sack in 2018, however, might have been the best of his NFL career as he essentially beat two players on his way to the quarterback. In total, Chickillo had just 10 pass rushing pressures all season and that’s a disappointing number. He’s currently scheduled to become an unrestricted free agent in March and should the Steelers decide to re-sign him, it shouldn’t be for anything more than the minimum allowed. Chickillo’s greatest asset to the Steelers over the years has been as a special teams player and very limited snap outside linebacker.