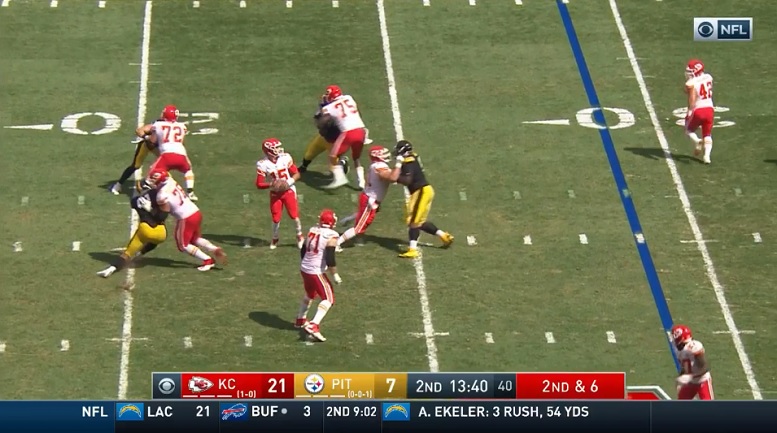 We’ll kick off this series of by looking at and contextualizing the one sack that Steelers defensive tackle Daniel McCullers registered during the 2018 season.

Early in the second quarter of the Steelers Week 2 game against the Kansas City Chiefs, McCullers rushed up the middle after lining up right over the center. After being forced to step up into the pocket due to the pressure off the edge from Steelers defensive end Stephon Tuitt, Chiefs quarterback Patrick Mahomes wanted to get greedy as he thought he could hold the football a little longer and hit streaking wide receiver Tyreek Hill down the middle of the field for a touchdown. McCullers’ ability to walk the center back four yards ultimately came into play and prevented Mahomes from being able to launch a deep throw. Instead, Mahomes just stepped right up into a sack even though he had a wide open tight end in the middle of the field for an easy first down.

Summary: This was the one and only sack that McCullers had during the 2018 season and while his effort in pushing the pocket was acceptable on the play, him getting the sack was more a result of Mahomes waiting and attempting to go for a home run instead of taking what was given him underneath.