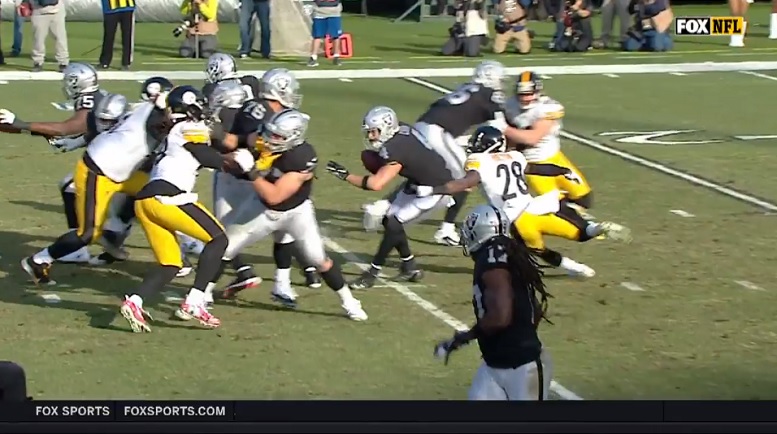 We’ll now move this series along once again by looking at and contextualizing the one sack that Steelers cornerback Mike Hilton registered during the 2018 season.

Later in the second quarter of the Steelers Week 14 road game against the Oakland Raiders, Hilton blitzed from the right side of the defense at the snap of the football and quickly sacked quarterback Derek Carr on a second and 8 play. It’s hard to know for sure, but Hilton’s blitzing may have been triggered by the pre-snap motion from the right side of the Raiders offense. In short, possibly a sight/formation blitz and especially due to the way Hilton reacts and shifts some when the motion is recognized. It’s hard to place blame for this sack on Raiders left tackle Kolton Miller due to Hilton timing his blitz right at the snap. In short, this was just a great call/adjustment that produced this sack and kudos to Hilton for timing it properly and more importantly, finishing it. This was one of the quickest sacks the Steelers defense registered all season.

Summary: This was the one and only sack that Hilton had during the 2018 season and it was uncontested and essentially a gimme as a result of poor scheme/recognition by the Raiders offense. This play started off with essentially four Steelers pass rushers against six Raiders pass protectors and quickly ended with a sack less than 3-seconds after the football was snapped.