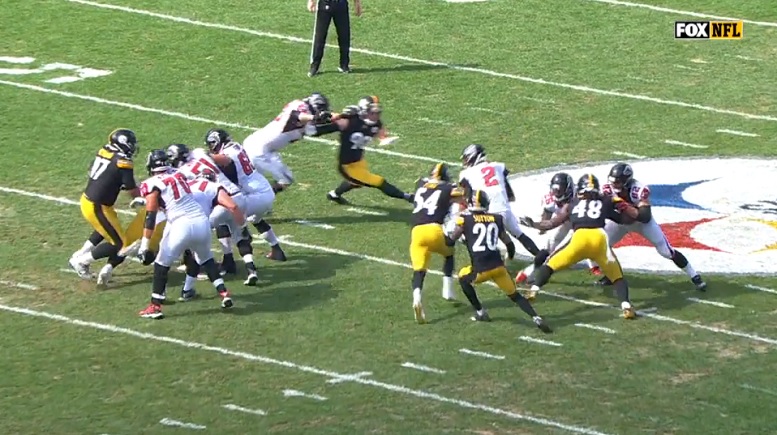 We’ll now move this series along by looking at and contextualizing the one sack that Steelers inside linebacker L.J. Fort registered during the 2018 season.

Later in the first quarter of the Steelers Week 5 home game against the Atlanta Falcons, Fort rushed through the c-gap via a green dog blitz and quickly sacked turtling quarterback Matt Ryan on a third and 6 play. The Falcons pass protection was slid to the offenses’ right on this play that resulted in five linemen on three Steelers pass rushers. The Falcons tight end Logan Paulsen blocked Steelers outside linebacker Bud Dupree on the opposite side and curiously enough, so did running back Tevin Coleman. With both Paulsen and Coleman staying in to pass protect, that gave Fort and Steelers defensive back Cameron Sutton the green light to go after Ryan through the open gap. Coleman was late to recover and Fort easily went by the running back for the easy sack of Ryan.

Summary: This was the one and only sack that Fort had during the 2018 season and it was essentially a gimme and a result of poor scheme/assignment performance by the Falcons offense. This play started off with four Steelers rushers against seven Falcons pass protectors and quickly ended with a 3-second sack. That simply should not have happened.