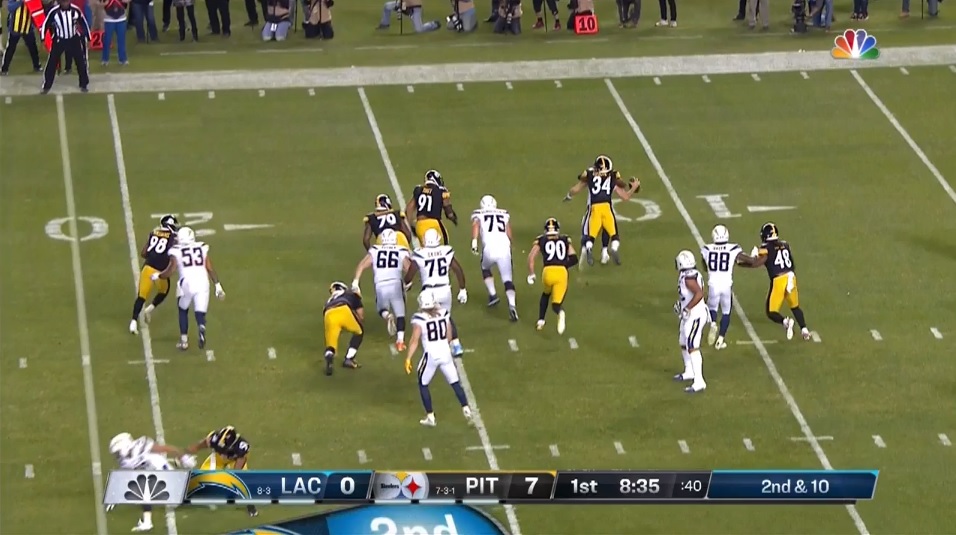 We’ll now move this series along once again by looking at and contextualizing the one sack that Steelers safety Terrell Edmunds registered during the 2018 season.

Midway through the first quarter of the Steelers Week 13 home game against the Los Angeles Chargers, Edmunds delayed blitzing from the right side of the defense after recognizing the tight end he was responsible for covering underneath was staying in to pass protect on a second and 10 play. The Chargers used max protection on this play that included 12 personnel on offense against the Steelers base 3-4 personnel package. With his first read to his left covered, Chargers quarterback Philip Rivers felt the pressure of a collapsing pocket that included Edmunds coming in his face via a delayed blitz. Rivers attempted to escape the pocket to his right but the athletic Edmunds was able to quickly track the Chargers quarterback down for the sack before he could throw the football away. The Chargers only had two wide receivers out on routes on this play and while the running back eventually got out past the line of scrimmage as well, it took a while for that to happen and regardless, he wound up being easily covered. You can probably call this one a coverage sack and put some blame on Rivers for not being able to throw away the football prior to Edmunds tracking him down.

Summary: This was the one and only sack that Edmunds had during his rookie 2018 season and like a few others we’ve already contextualized, it was ultimately uncontested and came via a delayed blitz. This play started off with essentially five Steelers pass rushers against seven Chargers pass protectors and ended with Edmunds coming free for the sack due to only three eligibles going out in routes. As a safety, Edmunds isn’t likely to be a huge sack producer during his NFL career, but it was good to see his awareness and athletic ability on display in his lone sack of his rookie season.