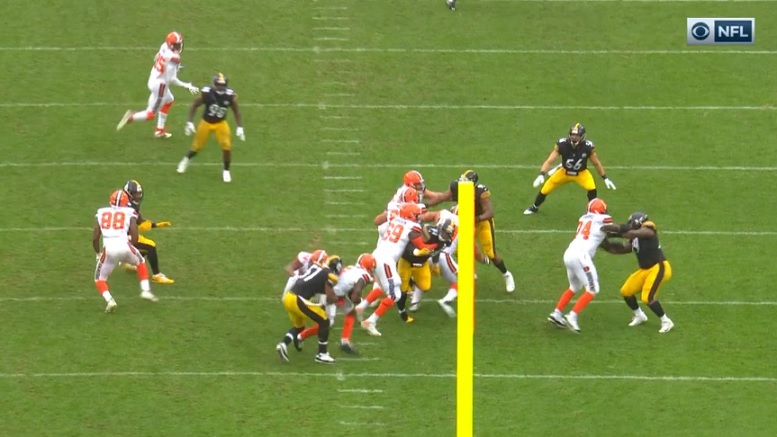 We’ll now move this series along once again by looking at and contextualizing the two and a half sacks that Steelers inside linebacker Jon Bostic registered during the 2018 season.

Later in the first quarter of the Steelers Week 1 road game against the Cleveland Browns, Bostic registered his first sack of the season on a second and 10 play. At the snap of the football, Bostic gets a free blitz run from the right side of the defense thanks to the Browns offensive line defensing a three-man rush on the other side with five players plus a running back. Once the running back figures out that Bostic is running free to his left, it’s way too late. This blitz and twist was nicely schemed and executed by the Steelers defense.

In the third quarter of the Steelers Week 3 game against the Tampa Bay Buccaneers, Bostic registered his second sack of the season on a second and 12 play. This sack also included a well executed blitz along with perfect timing and nice disguise. Pre-snap, it looks like the Steelers might send 6 after Buccaneers quarterback Ryan Fitzpatrick as both Bostic and fellow inside linebacker Vince Williams made breaks toward the line of scrimmage. Instead, Williams winds up dropping into coverage along with the outside linebacker on his side, T.J. Watt. Slant rushes to their lefts by defensive ends Cameron Heyward and Stephon Tuitt results in Bostic getting a one-on-one rush against the Buccaneers left guard. After Heyward forces Fitzpatrick to pull the down down to avoid pressure, Bostic is able to corral the quarterback for a sack.

Bostiv would go on to record another half sack in the Steelers Week 5 blowout win at home over the Atlanta Falcons in the third quarter and once again, it happened via a blitz. On this first and 10 play, Bostic comes late on a delayed blitz after seeing the Falcons running back, who he is responsible for, stay in to block. The Steelers sent five players after Falcons quarterback Matt Ryan on this play as part of a cornerback blitz. After Ryan is squeezed by the pressure and formed to step up into the pocket, Bostic and Heyward are both there to take him down for a shared sack.

Summary: Bostic’s 2.5 sacks in 2018 were a career high for him so there’s that. Even so, his sacks were related more to scheme than anything. His half sack was essentially a clean-up one as he was in the right place at the right time on a delay blitz. While higher in overall quality, Bostic’s other two full sacks weren’t overly impressive, either. However, it’s hard to fault Bostic for doing his job and getting good results and that’s exactly what happened on the 2.5 sacks he had last season. His limited athleticism is what led to the Steelers cutting him. He was a smart player for the Steelers and he didn’t miss many tackles at all.