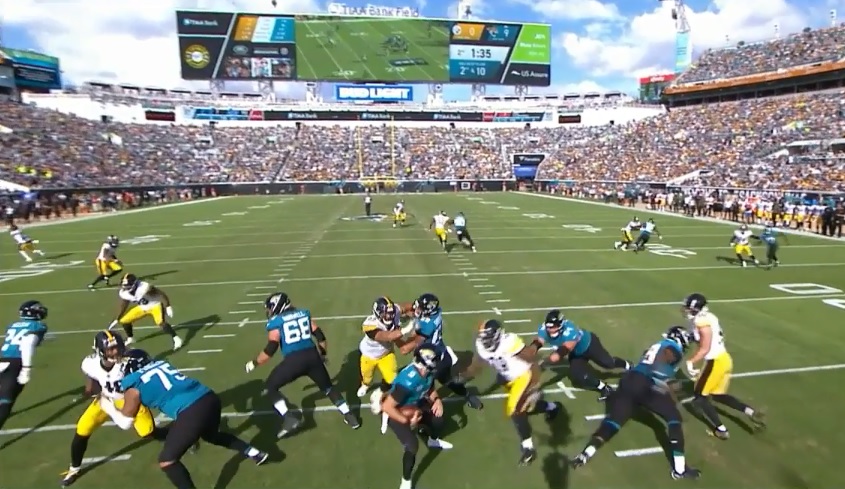 We’ll now move this series along once again by looking at and contextualizing the six and a half sacks that Steelers defensive tackle Javon Hargrave registered during the 2018 season.

Against the Cleveland Browns in Week 1, Hargrave recorded his first sack of the 2018 season. On this play, Hargrave his forced to battle a double-team from the center and right guard. Thanks to good coverage  and a constricting pressures from fellow defensive linemen Cameron Heyward and Stephon Tuitt, Browns quarterback Tyrod Taylor is forced to hold the football and step up into the pocket. Hargrave is able to get one arm through the double-team and it’s enough for Taylor to be ruled as being in his grasp for the sack.

In the fourth quarter of the Steelers Week 4 game against the Baltimore Ravens, Hargrave registered his second sack of the season on a second and 5 play. At the snap of the football, Hargrave again is forced to work against two offensive linemen, the right guard and right tackle. Good coverage down the field forced Ravens quarterback Joe Flacco to pull the football down and step up into the pocket. Hargrave easily works off the block of the right guard to his his right to sack Flacco for a loss of 2 yards.

In the second quarter of the Steelers Week 6 game against the Cincinnati Bengals, Hargrave registered his third sack of the season on a 1st and 10 play. At the snap of the football,  both Hargrave and Tuitt attack the A-gap and after quarterback Andy Dalton is forced to hold onto the football due to all three players in routes being covered well, Hargrave is able to squeeze through for the sack.

In the second quarter of the Steelers Week 11 game against the Jacksonville Jaguars, Hargrave registered his first of two sacks on the day. On this sack, Hargrave and Heyward performed a stunt with with the former slanting to the inside to occupy both the right guard and the center. A looping Heyward got good pressure on Jaguars quarterback Blake Bortles and that action, combined with great coverage down the field, allowed Hargrave to sack Bortles.

Later in the second quarter against the Jaguars, Hargrave registered his second sack of the game. On this play, Hargrave uses a quick first step to the inside to get the right guard to reach while a bit flat-footed. That inside fake is followed up by Hargrave swimming over the guard to the left. That instant pocket access, along with great pressure from Heyward up the middle, allows Hargrave to register a relatively quick sack of Bortles on a 2nd and 10.

Against the Denver Broncos in Week 12, Hargrave registered a half a sack with Heyward in the fourth quarter. On this sack, both defensive linemen got great instant pressure. Hargrave beat the right guard to the left, while Heyward drove the center directly back into the lap of Broncos quarterback Case Kennum. The two Steelers easily get into the legs of Keenum to trip him up for the quick sack.

Against the Chargers in Week 13, Hargrave registered his final full sack of the 2018 season in the third quarter and on a 1st and 10 play. Good coverage helps a lot on this Hargrave sack as Chargers quarterback Philip Rivers has nobody open to throw to on the two-man route until late in the play and after he has stepped up into the pocket to his left. The extra time created by the good covergae allowed Hargrave to work around the outside of the right guard to corral the trapped quarterback.

Summary: As a whole, Hargrave’s sack reel from the 2018 is impressive and includes a few very quick sacks. Obviously, Hargrave benefited a lot from the work done by Heyward, but the young defensive tackle still showed great agility, strength and a plan in several of these sacks. Hargrave really worked well last season as a pass rusher against guards and thus not lined up as a 0 or 1 tech. I suppose we’ll see even more of that in 2019 and it’s hard to see Hargrave not registering at least another 5 sacks in the process.