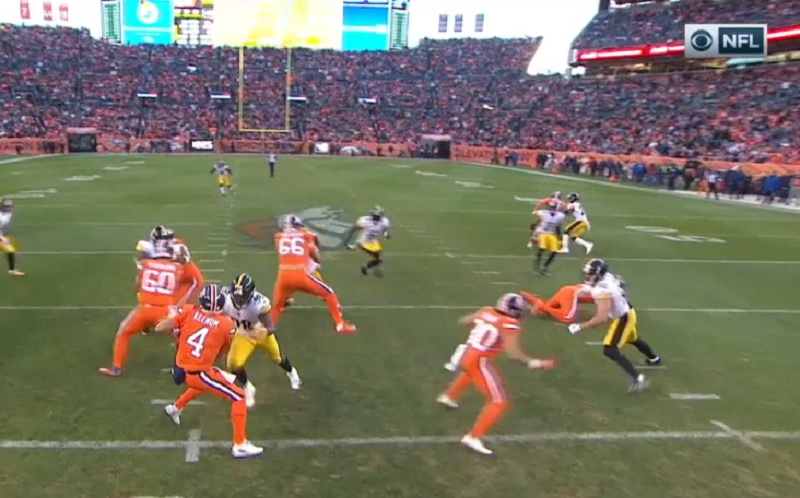 We’ll now move this series along once again by looking at and contextualizing the four and a half sacks that Steelers inside linebacker Vince Williams registered during the 2018 season.

Early in the second quarter of the Steelers Week 6 game against the Cincinnati Bengals, Williams registered his first sack of the season on a first and 10 play. At the snap of the football, Williams maintains gap integrity during what starts off looking like might be a running play. The Bengals play action fake to the running back, combined with h-back staying in to help pass protect after coming across the formation, frees up Williams to rush the quarterback. Thanks to the Steelers four-man rush constricting the pocket, Bengals quarterback Andy Dalton is forced to try to escape and Williams is there to make sure that doesn’t happen.

Williams’ second sack of 2018 came against the Baltimore Ravens in Week 9 and on first and 20 play later in the third quarter. On this play, Williams comes on a blitz from the right side of the defense and it allows him to get singled up on Ravens running back Javorius Allen. That’s a huge mismatch in Williams’ favor and as he has done throughout his career, he easily disposes of the pass protecting running back. The great man-coverage provided by the Steelers defense on this play resulted in Ravens quarterback Joe Flacco having to pull the football down and look to his left. That delay gave Williams and outside linebacker Bud Dupree plenty of time to get to Flacco and they ultimately share a sack.

Williams recorded his second full sack of 2018 in the Steelers Week 10 blowout win over the Carolina Panthers and once again it featured him blowing up an opposing running back. On this 1st and play in the first quarter against the Panthers, Williams comes on a B-gap blitz and he quickly goes over the top of an attempted cut block by running back Christian McCaffrey to sack quarterback Cam Newton, who failed to get the ball out to an open tight end in the middle of the field quickly.

Against the Jaguars in Week 11, Williams registered his third full sack of the season in the fourth quarter against the Jacksonville Jaguars. On this second and 8 play, Williams was part of a five-man rush having blitzed via the left side B-gap. As a whole, the Jaguars offensive line initially did a great job of handling the Steelers pass rush but once defensive lineman Cameron Heyward walked the left tackle back into the pocket, Jaguars quarterback Blake Bortles decided to pull the ball down and Williams was there to make sure he found his way to the ground quickly. Honestly, you could make a good argument for this sack to have been split between Williams and Heyward.

Williams’ final full sack of the season came against the Denver Broncos in Week 12 and it was a quick one. Williams run blitzed on the left side of the play at the snap of the football on this first and 10 play and he quickly beat the Broncos right guard to his outside with some very good hand usage. Once free, Williams had a straight and unimpeded shot art Broncos quarterback Case Keenum just a few seconds after the football had been snapped. Keenum had no choice put to pull the football down and take the sack.

Summary: Williams’ 4.5 sacks in 2018 mostly included what he does best and that’s blitzing and or working north and south and getting matched up on offensive players one-on-one. Williams against most NFL running backs is a mismatch and we saw that a few times again in 2018. A few of Williams’ 2018 sacks were obviously effort sacks and a result of pressure by other Steelers defensive players. Overall, it’s not a bad 2018 sack reel for Williams, who now has 15 for his career. Even so, Williams’ 8 sacks in 2017 were a bit more impressive from an overall quality standpoint. Once again, it’s hard to knock a player any for perfectly carrying out his play/scheme responsibilities and Williams did just that in these 4.5 sacks from 2018.