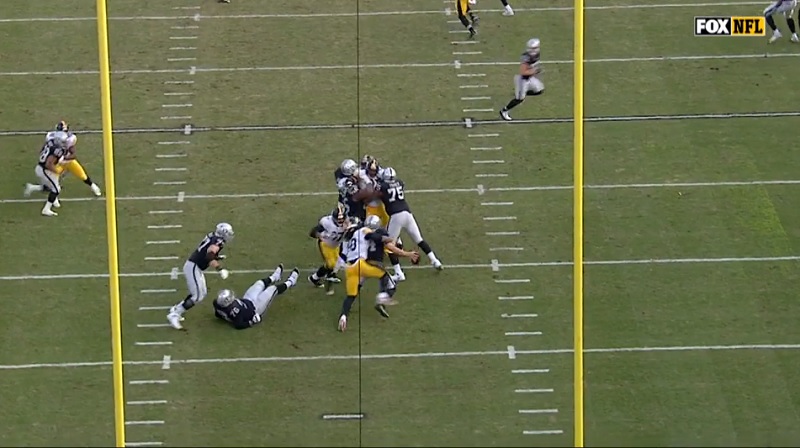 We’ll now move this series along once again by looking at and contextualizing the five and a half sacks that Steelers outside linebacker Bud Dupree registered during the 2018 season.

Late in the second quarter of the Steelers Week 1 game against the Cleveland Browns, Dupree registered his first sack of the season on a second and 16 play. At the snap of the football, Dupree gets a great jump on the young left tackle, who is slow getting out of his stance. Dupree gets his hands into the chest of the tackle and then beats him around the edge once the gate is open. The blitzing by safety Morgan Burnett is followed by him running over the running back and this prevents Browns quarterback Tyrod Taylor from being able to step up into the pocket. Dupree is able to strip the football out of Taylor’s hand as he’s cocking to throw. Unfortunately, the loose football is ultimately recovered by the Browns offense and the first half ends on this play.

Dupree’s second sack of 2018 came against the Tampa Bay Buccaneers in Week 3 and on first and 11 play in the third quarter from the Steelers 11 yard-line. On this play, Dupree comes off the left side of the Steelers defense and the same side as blitzing inside linebacker Jon Bostic is coming from. While Dupree’s rush around the edge is easily cut off by the Tampa Bay right tackle, Bostic’s rush angle and depth he gains opens up a huge cutback area for Dupree to reverse coarse to. The Steelers good coverage in the secondary forces Buccaneers quarterback Ryan Fitzpatrick to hold on to the football a while and Dupree takes advantage of that and him having a direct and unimpeded path. It’s a 4-plus second sack, but it still counts.

Dupree’s quickness and athletic ability played a big part in his third sack of 2018. On this first and 10 play against the Baltimore Ravens in Week 4, Dupree stunts back inside behind nice penetration from Steelers defensive lineman Cameron Heyward, who manages to tie up both the left guard and left tackle in the process. The Ravens left guard is a bit late recognizing the stunt back inside by Dupree and the Steelers outside linebacker is able to get finish off Baltimore quarterback Joe Flacco.

On this 5-man rush against the Ravens in Week 9, Dupree ultimately registers a half sack along with inside linebacker Vince Williams. This is an effort half sack for Dupree as he had to get off the ground after being pushed down from behind by the Baltimore left tackle as he was attempting to bend the corner. Williams and outside linebacker T.J. Watt got the initial pressure on this play that drives Flacco to his left and Dupree is up off the ground in enough time to help finish off the Baltimore quarterback.

Against the Carolina Panthers in Week 10, Dupree uses an outside rush similar to the one that he registered his first sack of the season with and he’s able to gain the edge and get to quarterback Cam Newton. Dupree’s sack, however, is aided by a blitzing Bostic as the inside linebacker’s deep penetration and subsequent beating of the running back prevents Newton from being able to strep up into the pocket to avoid any kind of deep edge rush of Dupree’s. Notice that Newton is 11 yards from the original line of scrimmage when Dupree gets to him.

In what may have been Dupree’s best sack of 2018 against the Oakland Raiders in Week 14, he beats left tackle with speed and a little power around the edge on a first and 20 play in the third quarter of the contest. After powering around Raiders left tackle Kolton Miller, Dupree is just barely able to beat Heyward to Oakland quarterback Derek Carr for the sack.

Summary: Dupree’s 5.5 sacks in 2018 mostly included what he does best and that’s using his speed and great get-off off the edge. Dupree was the beneficiary of a few inside rushing by his defensive teammates in a few of his 2018 sacks as those prevented opposing quarterbacks from being able to step up into the pocket. While Dupree isn’t a big speed to power edge-rusher, at least we saw him win that way in his 2018 sack reel. His athleticism will garner him at least a few sacks every season as will his ability to maintain effort when driven deep past the quarterback. Dupree still stunts extremely well to the inside, however, he still lacks a signature pass rush move as he enters his fifth season in the NFL.