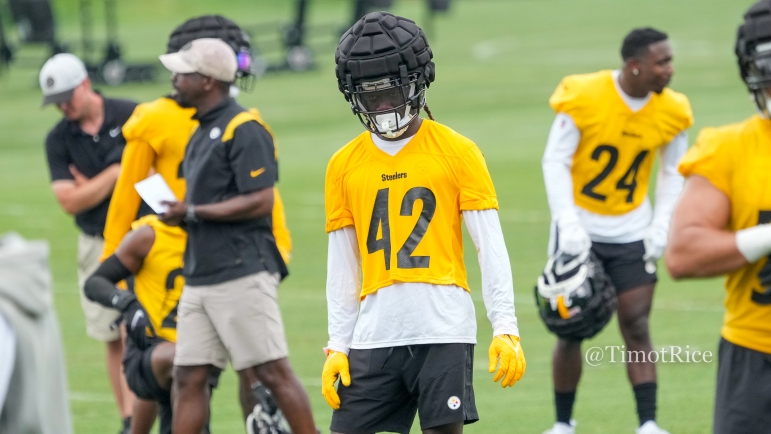 Levi Wallace was brought in via free agency after four seasons in Buffalo. The former undrafted player earned his way into the starting lineup in year two and never let go. In his three years as a starter he averaged 2 interceptions and 9 pass breakups per year. He is also a willing run supporter and has averaged over sixty tackles a season over the past three years.

The team acquired Ahkello Witherspoon in September but it wasn’t until late in the season that he made an impact. He didn’t see any major playing time until week thirteen and had only 3 starts on the year. In that short time he was able to lead the team in interceptions and pass breakups. The Steelers are hoping he will continue that type of play but having some concern about what he’ll provide this season is a tangible thought.

Versatility is the word that describes the ability of Cameron Sutton. He is entering year six with the team and has played outside, at safety and in the slot. The latter is where he will be used for the most part and in 2021 it was the first time he started every game. He set career highs in interceptions (2) and tackles (52). On defense, he tallied 1,089 snaps nearly doubling his season high. He has become a very important part of the defense.

After signing with the team of September of last season Arthur Maulet was able to carve out a role for himself on the defense. He was used primarily as an early down option in the nickel defense splitting time with Tre Norwood. Being a solid performer against the run from the slot position led him to a career high 47 tackles on the season. Diagnosing plays well and a willingness to attack the ball led to five tackles behind the line of scrimmage.

The team will keep at least five and possibly six players at this position. Here are the candidates.

An undrafted free agent find in 2020 Pierre made his mark on special teams in his rookie season. While playing just 27 snaps on defense with two thirds of those coming in the final game of the season he was a core special teamer on coverage teams especially. He logged 227 snaps with the majority of his 10 tackles coming via special teams. In 2021, he played in every game starting four but he did have some growing pains. He finished the season with 47 tackles, 37 solo, four pass breakups and three forced fumbles.

On the positive side, he is a highly confident player and is ready to show last season is not all he can do.  He plays a physical brand of defense of that is fun to see. Mentally and physically he feels he has learned from last year’s benching. He’s a good special teams coverage units and as blocker versus the opposing gunner.

On the negative side, he was benched last season after giving up some big plays against Cincinnati and four touchdowns on the year. He didn’t see any defensive snaps the final six games. He also had some issues tackling and against the run which was a strong point of his game leading up to being removed from the defense

A long and lean player who was a third round pick in the 2019 draft. He was a player the team was high on who they had hoped would progress into an outside corner. To this point, that has not been the case. He has played in 45 games including playoffs with zero starts. He’s managed just 145 defensive snaps with most of that coming in 2020. On special teams, he has proven himself as a gunner totaling almost 600 snaps. He has 41 career tackles and one fumble recovery.

On the positive side, he has become a pretty good gunner and is a valuable special team player. He is in his fourth year so he does know how the defense operates. There are indications that he has looked good early in camp. He had an interception in the second preseason game.

On the negative side, in three years had has barely played on defense including just 28 snaps last year and has never started a game. If they don’t trust him on defense, should he be on the team? He played behind the next candidate in the second preseason game.

Could the Steelers front office have found another undrafted free agent gem? It is possible. The former USC Trojan has solid size and speed and is a fit for a Man Coverage scheme. While in college he had 94 total tackles, 62 solo, 3 tackles for a loss, 1 sack, 3 interceptions, 12 pass breakups, 1 fumble recovery and 1 forced fumble.

On the positive side, we love the unknown with potential. He is a willing tackler and had a tackle for a loss in the second preseason game. He played more snaps than Layne and had a pass breakup in that same game. With that name, he was born to be a Steeler.

On the negative side, he lacks length and struggled at the catch point while in college. He displayed average agility and will open his hips too soon in Press coverage. He lacks a stand out trait and was undrafted for a reason. In the first preseason game he only played two snaps on defense.