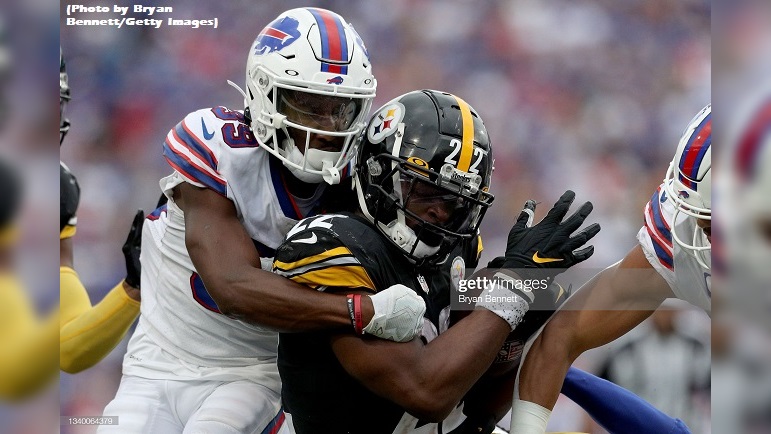 The Pittsburgh Steelers had a busy free agency, including the signing of Levi Wallace, and today I wanted to provide some data context to what he provided last season in the run game along with Pittsburgh’s cornerbacks as well. Let’s get right to it, starting with 2021 run snaps and average tackle depth to get a gauge of the quantity of plays and yardage comparatively. 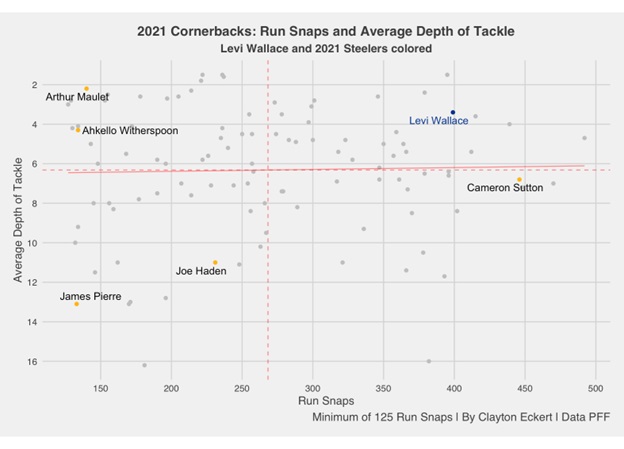 Wallace is the only player in our sites today that was above the mean in both data points, with 399 run snaps which ranked ninth out of 104 players with 125 snaps or more. His average tackle depth of 3.4 yards ranked 20th. Cameron Sutton had more snaps (446) which tied for fourth in the NFL, but allowed an average of 6.8 yards on his tackles (T-62nd). The only 2021 Steelers cornerback with a better average tackle depth than Wallace was Arthur Maulet, who allowed only 2.2 yards for an impressive sixth rank in his lower number of opportunities comparatively (140 run snaps). Ahkello Witherspoon was above the mean with an average tackle depth of 4.3 (30th), also on a lower snap count of 134.

Joe Haden and James Pierre landed below the mean in both data points, with especially poor results in average tackle depth. Haden’s number landed at 11 on 231 snaps. On the fifth lowest snaps, Pierre tied for the third worst average tackle depth of 13.1 yards. While the struggles of Pittsburgh’s defensive front against the run last season definitely contribute to the tackle depth results, the players in the previous paragraph were encouraging overall as we press forward.

Now let’s look at types of tackles, solo versus assisted tackles against the run: 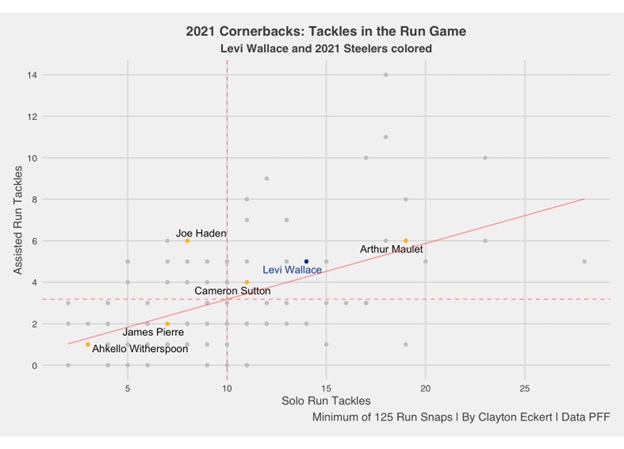 Maulet provided strong results in the tackling department, tying for the fifth most solo tackles of the group, very impressive on his lower snap count along with six assisted tackles that tied for seventh. Wallace was also above the mean with 14 solo which tied for 20th and five assisted tackles that tied for 15th on his larger sample size. Sutton landed just above the mean on one of the largest sample sizes, with 11 solo tackles (T-32nd) and four assisted (T-29th). While the number of tackles were slightly above average, Wallace and especially Maulet made more plays with less opportunities.

Haden, Pierre, and Witherspoon were below the mean in solo tackles, which makes sense considering their below average snaps counts. The former had the most opportunity comparatively and provided an above average assisted tackle result that matched Maulet.

Next, I wanted to see how the players fared in a ‘hit or miss’ type view with stop percentage, which uses the successful play rates formula (less than 40% on first down, 50% or less on second down, and third or fourth down plays kept without a first down or touchdown) and missed tackle percentage: 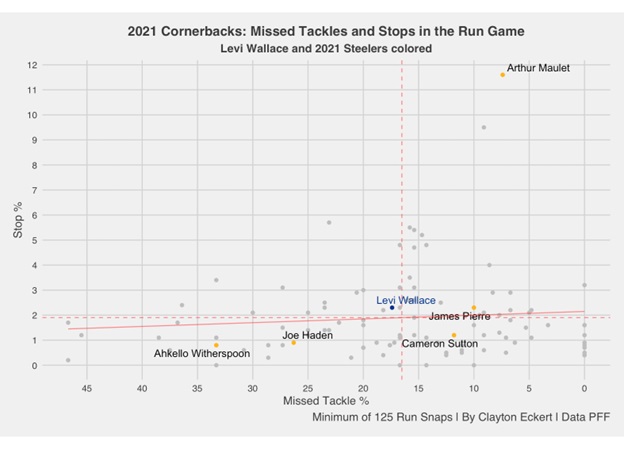 Maulet provided great value with the top ranked stop percentage of 11.6%. This was the only double-digit number, over two percentage point higher than the second rank, and more impressive context is all other players were below six percent! His missed tackle percentage was also strong for a 22nd rank. The only other player who was above the mean in both data points was Pierre, who fared best in missed tackle percentage (10%) which tied for 32nd. His stop percentage of 2.3 was just above the mean and tied for the 27th rank, but important to remember his poor result in tackle depth.

To close, let’s look at a more total view of how the players fared in the run game with PFF run defense grades along with points above average per play (a players EPA responsibility on run plays using the total points system that distributes credit among all players on the field for a given play, and accounts for defenders in the box, blown blocks forced, broken tackles, and turnovers) from Sports Info Solutions (SIS): 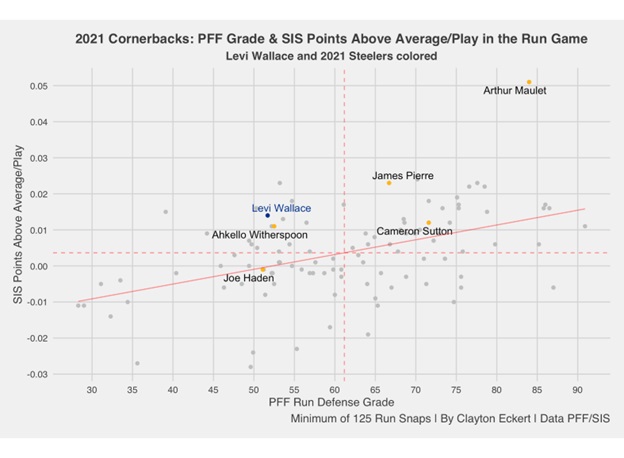 As expected, Maulet fared extremely well in the totality view. His top ranked points above average result was far and away the best mark at the position, along with a strong PFF grade (84) that ranked seventh. Sutton and Pierre were above the mean in both data points as well, the former having a stronger PFF grade (71.6) and the latter with a strong points above average result that tied for third!

Wallace and Witherspoon were above the mean in points above average but lower PFF grades. The former had a better mark in the points above average view, while the latter had a slightly better PFF grade. Haden was the only player below the mean in both, and considering the film, along with the data today and my coverage data studies in comparison to the league, we get additional context through the numbers some reasoning for the team moving on.

Witherspoon’s best results were average tackle depth and points above average but had poor results overall in opportunity, tackles, missed tackles, stop percentage, and PFF grade. It will be very interesting to see if he can make positive strides in the run game this season with the opportunity for more playing time. Pierre was above the mean in more areas, including missed tackle, stop percentage, points above average, and PFF grade with his lower marks coming in tackles and an especially low mark in average tackle depth. Here’s to hoping the unit can provide strong support this season for a defense looking to rebound from a historically bad run defense in 2021.